2. Preaching in the first Christian centuries
We have very little information regarding preaching in the first two centuries. We don’t know how preaching developed with the Gentiles as its audience, the content of preaching as regards the catechumens, nor the way these two forms of preaching meshed with the words of comfort and support expressed in the sermon at the Divine Liturgy. In Justin the Philosopher’s Apology (1, 67, 1-6), the oldest evidence we have for the celebration of the Divine Liturgy on a Sunday, Biblical readings are mentioned, as well as words of comfort and support. The content of the sermon, however, hasn’t survived [3]. At the beginning of the 2nd century, the second Epistle attributed to Clement II of Rome, known as ‘To the Corinthians’, is our first example of a complete sermon, with special features which shaped a new genre of literature, the Christian homily [4]. Its method is based on interpretation of passages from Scripture, 77 from the New Testament (33 from the Synoptic Gospels, 31 from Saint Epistles, 4 from Acts, 3 from James, 3 from I Peter, I from Jude and 2 from the Revelation) and 25 from the Old (2 from the Pentateuch, 10 from Isaiah, and 4 from the Psalms). The Language is Hellenistic Greek and its style is uncomplicated, which is indicative of the audience it was directed towards, among whom there would not have been those who wrote in the style of classical Attic Greek or who loved flights of rhetoric. 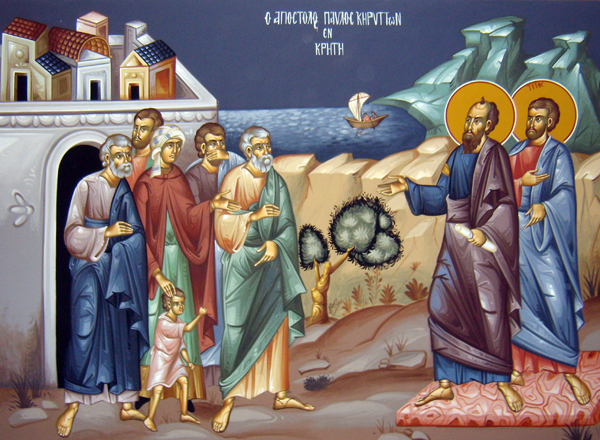 In the 4th century, Atticism was dominant in the writings of the Hellenistic world, as the language of high literature and the declamations of the 2nd Sophistic period were held to be the examples of choice for an acceptable literary style, and this had an influence on Christian preaching. The Christian homily was given its definitive form by John Chrysostom and the Cappadocian Fathers, who used the gradually evolving Hellenistic Greek of the Scriptures in their spoken discourse, but adopted Atticism when writing, as well as ornate forms of rhetoric in their linguistic style.

The reasons which dictated this switch on the part of the great teachers of the Church had to do with their mission of spreading the Gospel. They wanted to attract the intellectuals of the age, so that the message of the Church wouldn’t be rejected out of hand. Hellenistic Greek, with the spontaneity of style in which the Christian canon was written, was simply unacceptable, since it didn’t meet the requirements of Aristotle [6], according to whom sublime concepts and truths needed to be formulated in elevated language.

The meeting-point of the Teachers of the Church and classical Rhetoric was polished oratory, where emphasis was given to the aesthetic result of a meticulous style [7], which made the content of the message more readily acceptable. The fundamental principles of Aristotle’s Rhetoric, however, as regards the means of persuasion, clashed with the very nature of Scripture. Essentially this meant, in the first place, the unpolished (testimony of witnesses) versus the polished (based on the moral character of the speaker); and passion (the stimulation or discouragement of emotions or thoughts among the audience) versus speech (sufficient logical proof based on argument and example).

In the Christian sermon, persuasion was based on the authority of God, not on the abilities of the speaker. The manner of address of the speakers in preaching was founded on God Himself, so they were his messengers. Their discourse wasn’t that of sufficient rational argument, but revelation. In Apostolic times, there was an unbridgeable gap between faith and reason, as Saint Paul confirms: ‘and my speech and my message were not in plausible words of wisdom, but in demonstration of the Spirit and of power’ (I Cor. 2, 4).

[3] ‘the recollections of the apostles are read, or the writings of the prophets, as much as there is time for. When the reading has stopped, the celebrant imitates these good people through words of instruction and instruction’.
[4] For more on the beginnings of Christian preaching, see Dimitra Koukoura, Η Χριστιανική Ομιλία, Barbounakis, Thessaloniki 2014, pp. 171-208.
[5] On the philosophical and literary movement of the 2nd Sophistic, see Graham Anderson, The Second Sophistic. A Cultural Phenomenon in the Roman Empire, ed. Taylor and Francis, London New York 1993.
[6] Rhetoric 3, 1404b1-25.
[7] For more on this, see Dimitra Koukoura Ρητορική και Εκκλησιαστική Ρητορική, Pournaras, Thessaloniki 2011, 3rd ed., pp. 199-215.