The Theology of Gender – 18. Canons alone cannot save

The return to the original state of humanity, as it was created from the beginning, is accomplished through the process of catharsis. Although some believe that catharsis is mainly to abstain from external physical sin, this view can lead to a mere moralistic or pietistic understanding of the Christian life. According to patristic theology, catharsis is the first stage of the process of spiritual life that finally leads to theosis, and refers to three essential elements: the turn of the powers of the soul towards God; the release from the captivity of pleasures and grief; and the cleansing of the heart from thoughts.[1] The canons serve the purpose of keeping the faithful from philosophical thoughts and formalism, which are characteristics of heresy, and insist on asceticism, which is the pure Orthodox attitude.[2]

Catharsis is the aim of the ascetic tradition and is accomplished through repentance (μετάνοια). When the heart has been cleansed, the whole person is transformed from an egoist, to a philanthropist. A cure has been attained when self-centered love becomes an unselfish offering to others. This is the purpose and aim of all laws in the Church and in this way they do not differ from ascetic theology. 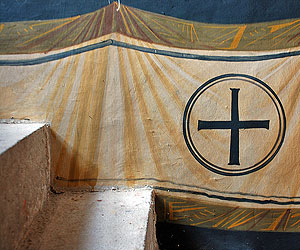 Because of the nature of the Church as divine-human communion, the canons produced by the Synods also communicate in place and time the elements of divine and human will. In fact “the original source of canon law is found in the will of God to establish His Church on earth. Consequently, the source of its authority stems from the will of God.”[3] The theological characteristic of the canons distinguishes them from civil legislation; their function in the life of Christians is alien to any legalism or ecclesiastical bureaucracy.

Faithfulness to canonical order is not the blind keeping of external rules but the honoring of the principles of the Church. St. Basil, in one of his letters to Peter the Second, Bishop of Alexandria (373-381AD), considers canons to be the “power” (ἰσχύς) of the Church.[4] He is very sensitive concerning the good order of the Church and faithfulness to her canonical legislation. Disobedience to the canons, according to St. Basil, results in commotion in the Church.[5] St. Nikodemos the Hagiorite, the patron saint of Canon Law, also condemns Christians who criticize those who follow the canons of the Church and the apostolic tradition.[6]

Nonetheless, while the canons have an essential place in Christian life, they alone cannot save the faithful. The canons indicate the boundaries of the Church, the parameters within which the faithful person should remain. Thus he is offered the opportunity to be saved. In Orthodox theology, the canonical order is the structure of the Church, but is not the essence of this institution. Canonical order presupposes the existence of the Church as the body of Christ which is sustained through the energy of the Holy Spirit. The canons were created for the Church and not vice versa; the essence of the Church is its sacraments and above all the Holy Eucharist.[7]

St. Basil’s instructions to spiritual fathers signify the pastoral service of the Church through her canonical order, which they undertake.[8] Their vocation is not to simply execute their legal authority, merely applying penances to sinners according the canons, but to work for the salvation of those who are in tribulations due to their sin. Spiritual fathers are called by St. Basil to work constantly, at every opportunity, for the healing of the sinful, and part of their effort must be to pray for the person who is trapped by the devil.

Pastoral care for the sinner is expressed even through penance, which, according to St. Basil, is not a punishment for actions that belong to the past, but a means to help the sinful person and the others in their life in the future.[9]  Saint Basil as a specialist in the law gives, in one of his epistles, the reason behind the punishment (sentence) in civil law, as well as, in the Church’s law. He rejects the theory of repayment, by which the civil law was influenced, and emphasizes the value of punishment as a preventive action for the person who transgresses the law and society in general.[10]

Sin, in the Orthodox Church, is not a personal issue since the separation of a member of the Church from God is reflected in the ecclesiastical community as a whole. According to St. Basil separation from God results in the alienation of the human person.[11] Through this distancing from God the person loses his identity and this has consequences for all of society. The ecclesiological dimension of sin is much more evident in the institution of marriage, because according to St. Symeon of Thessalonica: «all who are united in marriage badly are separated rather than united to God and due to this separation from God commotion results in the Church».[12] According to Hierotheos, Bishop of Naupactos, the sinner is a revolutionary against God, and a dictator who abolishes the freedom of others.[13] Thus the therapeutic method of the Church and its canons is the restoration of the unity of the body of Christ since: «…this is the whole purpose and goal, that we all unite with the good and our Savior».[14]

In Orthodox tradition the purpose of canonical discipline is not to administer justice in this world, but to turn sinfulness into a means of salvation, because “…justice is eschatological. God does not will the present unjust activity of Satan and man but only tolerates it, so that those who would be saved can be tried and perfected through temptations.”[15]