Agape Vespers at the Russian Monastery on the Holy Mountain

It’s always pleasant to follow a thought in another language that you know because it’ll be expressed differently from the way your native language puts it. Hearing it an a language you don’t know at all is surprising in a different way- something that’s partially secret and unfamiliar. [At the Agape Vespers] the Gospel is read in whatever languages those present can manage: Greek first, of course, then Slavonic, perhaps Turkish, Armenian, Albanian, sometimes in Arabic or Latin and so on. I have a little book, which was published in 1870 in Constantinople, containing the Divine Liturgy of Great Saturday and the Gospel in various languages for Vespers on Easter Sunday. Naturally, the first version is in Greek. This is followed by the same passage (about the second appearance to the disciples who had gathered together) in Greek heroic couplets, then Greek iambic verse [1], ‘Slavo-Russian’, Modern Bulgarian, Albanian, Latin, Italian, French, Arabic, Turkish and Armenian. 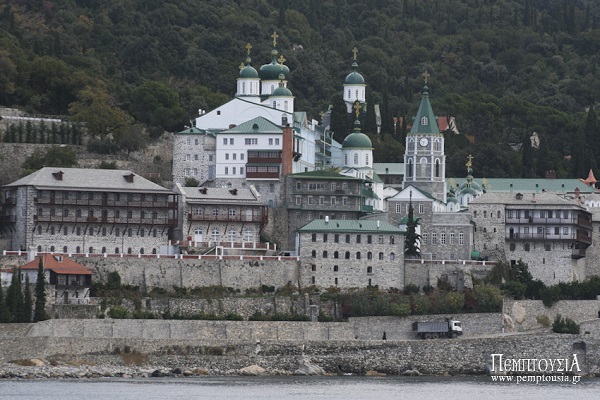 I’ve heard it read in various languages in different cities. This depends on which languages the people present are able to read in. I’ve attended this Vespers in Ioannina, Adrianople, Constantinople (at the Theological School of Halki) and on the Holy Mountain.

It was good everywhere, but on the island of Halki it was better than in the provincial centres, while on the Holy Mountain, at the Greek/Russian monastery of Saint Panteleïmon it was best of all.

We attended Matins and the early Liturgy at what used to be the ‘home’ chapel of the Pokrov (Protecting Veil), which the Russian brotherhood built at the top of the eastern part of the spacious monastery, which, as I mentioned earlier, is on the side of a hill facing the sea.

Vespers on Sunday was celebrated together with the Greeks down below in the main church (katholiko), which is built, as are [almost] all on Athos, in the middle of a paved courtyard.

This in itself is already of great significance.

In the Russian chapel of the Protecting Veil of Our Lady the Mother of God, there’s nothing of any great note, except the iconostas and the finely-chased and expensive vessels. The chapel’s spacious, warm in the winter and can be reached only through the warm corridor leading from the reception room. This reception room is a large chamber with plastered walls and a large number of big, rectangular windows which open onto the lower (Greek) part of the monastery, the sea and the permanently dark line of Sithonia, which is rather depressing, but not without its own magnificence. Around the walls are prayer stalls with armrests and misericords so that monks and pilgrims can stand but still find a little relief.

Some of these seats, particularly those of honour for distinguished guests or holders of high office, are in the middle of the empty chamber, next to the plastered columns. There’s comfort, cleanliness, spaciousness and whiteness, but don’t look for beauty or magnificence. One iconostas, in my opinion, is very good. In fact, I’d even go so far as to say that it’s beautiful. It’s very distinctive, delicately heavy, properly varied and properly monochrome.

It isn’t high, nor completely gilded, it’s dimensions are somewhat bulky and the decoration is neither complicated nor skillfully wrought, but rather severe. The Royal Doors are also low and very wide, the ‘local’ icons are placed in a single line and the faces are the same size as those of real persons. Unless my memory deceives me, there are only four icons: the Saviour, the Mother of God, , Saint Panteleïmon, the patron of the monastery [2], whose skull is kept in the Greek part, and the Russian Saint Mitrofan, who was brought here by our compatriots. All these icons are wonderful works from the ateliers of the monasteries of the Holy Trinity and Saint Sergius. Their delicate depiction is very human, as regards the colours of the faces and the expressions: mysteriously serene figures of God the Teacher, Our Lady with Christ as a child, the very handsome young martyr and the white-haired, venerable elder. The Saviour is dressed in light blue and pink garments, while those of Saint Panteleïmon are deep red and green- very beautiful against the monochrome, gilt background. As regards the person of Christ, I’ve never seen anything to compare with it before or since. It’s an image of the highest quality rather than a painting. He’s handsome, manly and young, a little pale, calm and peaceful with just a hint of Jewishness, for historical verisimilitude.

[1] A couple of years ago, the Gospel was read in our parish church in a variety of languages, one of which nobody understood. It was explained at the end that it was Homeric Greek. I’m still trying to understand the rationale for this, especially since it wasn’t read it Modern Greek.
[2] In general, monasteries on the Holy Mountain (with the exception of the Great Lavra and Zografou [the Painter]) are name after the founder, while sketes and kellia are named after saints or feasts Thus, Saint Paul’s, for example, is named after Saint Paul the Athonite, who also founded Xiropotamou, but the nearby skete is dedicated to Saint Ann, the mother of Our Lady. The Russian monastery would appear to be another exception, but this is not, in fact the case. It was founded in the 11th century as a small monastic house known as ‘The Thessalonian’s’. This Thessalonian was, in fact, called Panteleïmon, so although the main church is, indeed, dedicated to Saint Panteleïmon, the monastery is actually named after its founder.