Bartholomew: The Patriarch of Our Century

“Therefore I take pleasure in infirmities, in reproaches, in needs, in persecutions, in distresses, for Christ’s sake. For when I am weak, then I am strong” (2Co 12:10). 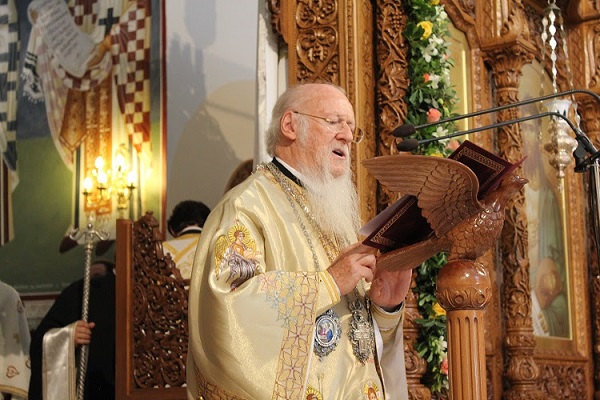 His All-Holiness delivering the homily during the Synodal Divine Liturgy (Holy and Great Council) for the Sunday of All Saints 2016 at the Church of Sts. Peter and Paul in Chania, Crete.

On June 11th the Orthodox Church commemorates the Holy Apostle Bartholomew. One of the Twelve Great Apostles, he preached Christ and the good news of salvation throughout Asia, including India, and finally in Armenia. It was there, in Albanopolis of Armenia – the first country to officially declare Christianity the state religion – where Bartholomew was crucified, and where many miracles occurred over the sacred coffin containing his grace-filled relics.

June 11th is also the Name Day of His All-Holiness Ecumenical Patriarch Bartholomew, who is named after the Glorious Apostle. Born on February 29, 1940, he grew up on the island of Imvros, in a small village named after Sts. Theodore, the Teron and Stratelates. Recommended by his local bishop and mentor, Meliton of Chalcedon (+1989), Demetrios, for that is Bartholomew’s baptismal name, completed high school and seminary studies at Halki.

It was there at the Theological School of Halki, in the Chapel of the Holy Trinity, where in October 1969 the revered Metropolitan Meliton ordained Deacon Bartholomew to the holy priesthood. Before this, however, he would complete his mandatory two-year military service, and supplement his academic studies in Europe, including in Italy, Germany, and Switzerland. He eventually completed his doctoral thesis (The Codification of the Holy Canons and the Canonical Constitutions in the Orthodox Church) and returned to Constantinople in 1968 fluent in seven languages.

Since then, for a half-century, His All-Holiness has been at the centre of both the inner workings and initiatives, as well as the external activities, of the Ecumenical Patriarchate – the first See of the One, Holy, Catholic, and Apostolic Church. Whether it was learning from the erudite Ecumenical Patriarch, Athenagoras, or serving for almost two decades as the director of the Private Patriarchal Office for his immediate predecessor, Demetrios, Bartholomew exudes the unparalleled history and spirit emanating from the lighthouse that is the Phanar.

Elected 270th Archbishop of Constantinople, New Rome and Ecumenical Patriarch on October 22, 1991, His All-Holiness was enthroned in the Patriarchal Cathedral of St. George the Great Martyr eleven days later, on November 2nd. His longevity on the Ecumenical Throne alone is legendary – and historical. According to the first-ever definitive biography of His All-Holiness published last year, Bartholomew: Apostle and Visionary, he is one of only four patriarchs to serve more than 25-years, joining Titus from the third century, Sergius (seventh), and Nicholas (twelfth). 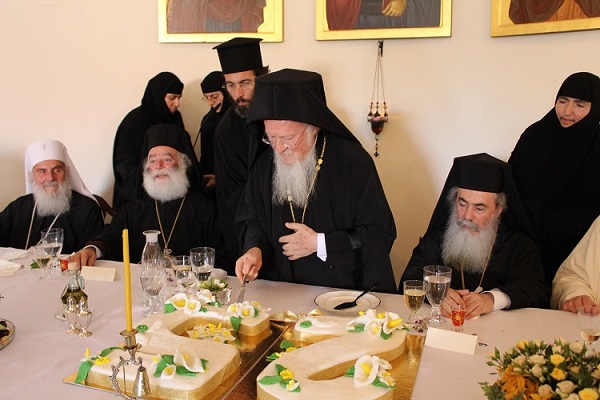 His All-Holiness cuts the surprise congratulatory cake representing his twenty-five years on the Ecumenical Throne, at the Holy Patriarchal and Stavropegial Monastery of Chrysopigi (at Kastro) in Chania.

His All-Holiness Ecumenical Patriarch Bartholomew has not just survived since being enthroned, he has thrived. His well-known work ethic, strategic communication skills, and his ability to bridge differences and build consensus among disparate groups, has enabled his personal success as patriarch and, more importantly, a robust renewal of the Ecumenical Patriarchate.

His accomplishments and accolades are too many to mention. He has received numerous state awards and honourary degrees from prestigious universities around the world. He has opened the door of Orthodoxy to many other Christian confessions and communities. He has engaged other faith communities with honesty and integrity; this includes organizing and participating in many interfaith conferences, including one shortly after the 9/11 terrorist attacks where he addressed a Conference on Peaceful Coexistence (Brussels, 2001) between Judaism, Christianity, and the Islamic world. He has been an unrelenting advocate for the environment, for God’s creation, well before it became popular or trendy to do so.

He has strengthened the Patriarchate, internationally, but in and around Constantinople as well. He has established many new metropolitan dioceses, from Toronto to Korea, Singapore to Spain. From securing the return of the former Greek Orphanage on Buyukada Island to reviving the monastic life on Halki under the spiritual guidance of Metropolitan Elpidophoros (the seminary regrettably remains closed, for now). Through his leadership, the Holy and Sacred Synod is electing and ordaining a new generation of learned hierarchs.

Within Orthodoxy, Bartholomew has made unity among the 14 autocephalous churches a cornerstone of his ministry, developing regular Synaxis of Primates – His All-Holiness has convened and chaired six Synaxis of Primates since being enthroned as Ecumenical Patriarch. Most of all, it was the Holy and Great Council of the Orthodox Church convened on the historic island of Crete where the Church manifested its unity on a world scale. Without His All-Holiness the Holy and Great Council would have remained an academic idea and an unreachable dream.

The power of an apostle, as described by St. Paul in his Second Letter to the Corinthians (cf. 4:7-15), and exemplified by St. Bartholomew and all of Christ’s disciples, is to be hard-pressed yet not crushed; perplexed but not in despair; persecuted but not forsaken; struck down but not destroyed.

Ecumenical Patriarch Bartholomew has followed in the footsteps of his patron saint, the Holy Apostle Bartholomew, preaching Christ crucified. His steadfast faith, unwavering loyalty to Holy Orthodoxy, self-sacrifice and service to others, in addition to his love for man and creation, is to be admired and imitated.