St Maximus the Confessor, the new Volume of Analogia, The Pemptousia Journal for Theological Studies 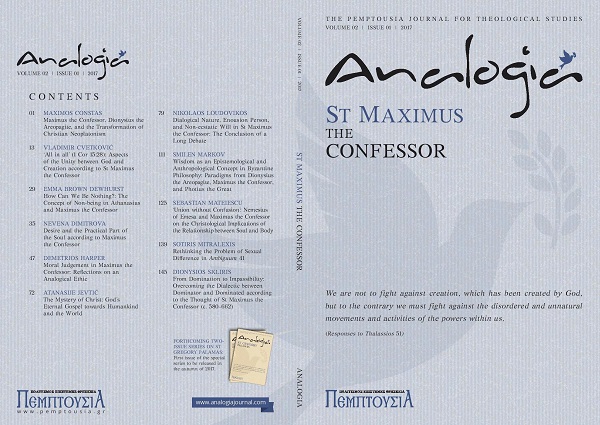 The most important thing to emphasize insofar as St Maximus the Confessor’s contribution is concerned, is that he does not merely represent a personal theological view among those of other Greek patristic theologians (although he has a strong personal style), but is also an excellent key to the understanding of a considerable portion of the theology of other Fathers. Having assimilated almost every kind of theology before him, he also opened the ways of its future: there is not one important theological figure after him who does not bear his influence in same way or other. Thus when we speak of Maximus, we do not speak of another patristic figure, not even an eminently important one, but rather one of the centers around which the Greek patristic tradition constantly gravitates…I believe his theological achievement provides an impetus to discover again the core of the author’s inspiration in the light of our own need to be inspired again today. In this way we are also capable of reworking some of the most delicate actual theological-philosophical issues: tradition means always reinterpretation, a new perception and evolution, without losing its center. As such, the most ground-breaking spiritual ‘discoveries’ are, in this sense, nothing different than a reworking of some of the ‘cores of tradition’.[1]

In recent years we have witnessed an explosion of dissertations, conferences, workshops, books, collections of essays, and papers—most of which are of high academic quality—dedicated to various aspects of the Confessor’s theology. Following this rich harvest, there is no doubt that Maximus represents one of the spiritual peaks of Christian theology. No future expressions of Christian theology, worthy of its name, can afford to ignore his thought. Indeed, perhaps no Christian intellectual engagement with modern ideas and difficulties will be convincing unless it also takes into account his extremely creative and challenging theological suggestions. However, no one can really and ultimately follow Maximus’ example unless he is himself creative and ground-breaking, in both an academic and existential sense. The Maximian fountain is inexhaustible precisely because his work is not merely the achievement of a good academic, but the immense feat of a Christian martyr.

Analogia owes the inspiration and the cause of this issue to one of the members of the Editorial Board, namely Dr Sotiris Mitralexis, who organized the workshop on St Maximus at the twenty-third International Congress of Byzantine Studies in Belgrade, August 2016, and invited many of the contributors of the present volume. Though not all of the workshop participants offered their papers for publication in Analogia, most of the articles in this volume were presented as drafts at the Belgrade workshop. The articles by two of the contributors, Bishop Atanasije Jevtić and Fr Maximos Constas, were added later. I wish to thank, first, Dr Mitralexis for his willingness to contribute the papers from the Belgrade workshop to this issue of Analogia, which has greatly assisted the journal’s editorial purposes. Second, I would like to thank the authors for their efforts towards the production of papers of high academic quality.

Regarding the articles themselves, Fr Maximos Constas offers an excellent account of the ways in which Dionysius and Maximus transformed Neoplatonism, by making markedly different use of its philosophical concepts. He focuses in particular upon the retooling of the paradigms, remaining, procession, and return. Vladimir Cvetković convincingly describes the four different modes/stages of union between God and his creatures. This union depends on the manifestations of the divine presence in creation as creator, provider, and objective, the latter of which defines, gives meaning to, and fulfils all the others. Emma Brown Dewhurst provides a fruitful comparison between Athanasius and Maximus the Confessor regarding the concepts of being and non-being. She suggests an existential Maximian reading of the Athanasius’ understanding of sin as the rejection of being. Nevena Dimitrova explores the extremely important meaning of desire in Maximus, and she successfully clarifies the process of the dynamic completion of human nature through Maximus’ modification of the philosophical concept of will. Fr Demetrios Harper skilfully elaborates upon a new description of the Maximian understanding of moral judgment in the context of what he calls an analogical ethic. Bishop Atanasije Jevtić offers a profound description of the way in which the incarnational mystery of Christ is realized in every man, through life as a participatory and existential experience of the Gospel, through and in the Church. Jevtić also makes special reference to the Maximian character of the Sixth Ecumenical Council. Smilen Markov explores the concept of wisdom in Origen, Dionysius, Maximus, and Photius, eloquently articulating the participatory and epistemological dimensions thereof. Sebastian Mateiescu provides a pertinent analysis of Maximus’ use of Nemesius of Emesa concerning the relationship between soul and body. Mateiescu discusses the limits of this relationship insofar as it is applied to the description of the Christological mystery. Sotiris Mitralexis proposes a reading of the Maximian theology of sexes that radically departs from both the Old (Genesis) and New Testament (e.g. Gal 3:28). He states that Maximus ‘not only asserts that sexual difference itself (and not only sexual division or reproduction) will not endure the eschata’, but also that ‘the differentiation between male and female is not even part of humanity’s logos of nature’. Dionysios Skliris studies the shifting roles, according to Maximus, between dominated and dominator through the influence of the former upon the latter. He discusses Maximus’ understanding of eschatological liberation from this dialectic of domination, with which pleasure and pain are closely connected. Skliris argues that Maximus’ refutation of Monoenergism enables him to conceptualize this escape from the dialectic. Finally, in my article, I strive to conclude a long theological debate with modern Orthodox Personalism and show that, in Maximus, nature is essentially dialogical. That is, I argue against the imposition upon Maximus of any abstract separation of nature from person. In the Confessor’s view, person is enousion, not an abstract ecstatic detachment from nature. Will, for Maximus, is an expression of the inner life of nature, both in anthropology and Christology, and stands in opposition to any transcendental conception thereof. I also strive to show that neither Trinitarian life nor human fulfilment can be theologically articulated without the concept of homoousion. Finally, I seek to inaugurate a systematic discussion of these notions within the context of modern Philosophy and Psychology.

Analogia is available in hard copy and digital editions.

For hard copy editions, please subscribe to Analogia at http://analogiajournal.com/subscriptions/

For the epublications (for Mac and iOS only), please follow the links below: