The Nature of Luther’s Preaching

A) The Main Features of his Sermon
He preached 4-5 times a week at Wittenberg and it wasn’t unusual for him to give 4 sermons in one day, following in the steps of Augustine and Ambrose of Milan. He followed the lectio continua (continuous reading of Scripture) and it’s estimated that he preached about 4,000 sermons, of which some 2,300 have survived [34]. In the pulpit, he had with him a brief outline (known as the Konzepten [Ideas]), which he followed in his oral sermon. These notes haven’t been preserved. All we have are the sermons which were taken down in shorthand by his friends, although often enough they didn’t agree among themselves, even though they’d attended the same sermon. He himself published some of his own, as well, as a Postile (Book of Sermons) for those clergymen which were negligent as regards preaching. He didn’t write a Manual of Homiletics, but did give his students practical tips: to concentrate on one verse of the quotation and to teach simply and clearly what God wished to say. He warned them off the refined, self-gratifying style which some attempted in order to please the few notables of Wittenberg. 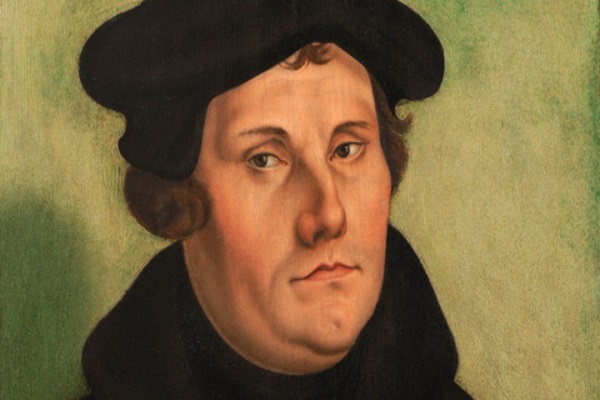 In any case, it was rare for the well-educated to attend church; in the main, the congregation consisted of those who were simple and illiterate. He himself aimed at these people, but as a restrained theologian with a profound knowledge of Biblical and Systematic theology [35], he didn’t hesitate to challenge other scholars to listen to his lectures at the university, where he was open to any kind of disputatio. At the pulpit, his aim was to make the Word of God comprehensible to ordinary people, like those who had been Jesus’ audience in His time. To do this he used the German language, as well as images and examples with which they were familiar. For this reason he rejected the thematic sermon (sermo modernus), which dealt with a dogmatic subject (disputatio) and instead based his preaching on the Biblical text itself, leading his audience towards an understanding of the meaning hidden behind each word. He returned to the interpretational homily (homilia antiqua) of the first Christian millennium, though without going into a detailed hermeneutical comment of all the words in the passage, but rather restricting himself to a single sentence [36], which he himself chose. His first concern was to make the text understandable in German and his next to seek the meaning (sensus) hidden behind the lines in the same way as the kernel of a nut is surrounded by a hard shell. The allegorical method was abandoned and a linguistic approach to the text was adopted. His main interest was not to impress the congregation with his sermon, but to bring those attending to an understanding of the Biblical text and its message.

His fundamental principle for a sermon is clear: ‘praedicatio verbi Dei est verbum Dei’ [37]. A sermon is the work of Our Lord Jesus Christ, Who acts in and through His Word. The Lord entrusts His Word to His servants so that they themselves can become His mouthpiece. It is in this way that proper preachers preach the truth and the audience which receives it is relieved of the burden of sin. When Christ is preached as the Prophets and Apostles present Him, it isn’t the preacher who is speaking, but God Himself: ‘preachers have no duty other than to preach the bright sun. This they should do, or else be quiet’ [38]. The preacher becomes the ‘living voice of God (viva vox Dei), since, through the preaching of the Gospel, the Holy Spirit approaches the people of God. The Spirit acts through the preacher through ordination and makes him holy [39]. Because of this, his words aren’t fleeting, as many dull and malevolent contemporaries of his might claim, but are rather the experience of Baptism, of the Sacrament, of the spoken Word, an experience which, he says, if the detractors possessed it, would keep them quiet [40]. Despite this, preachers can be domineering if they aren’t good channels for the voice of God. In that case, silence is preferable.

As regards the choice of Biblical passages which he interpreted, criticism has often been levelled that they come from Saint Paul, since the Epistles to the Romans and Galatians served his teaching on the Lord’s Cross and on justification through faith not works. Students of his oeuvre, however, 3/5 of which has survived, have found 30 on Romans, more than 1,000 on the Synoptic Gospels and several hundred on John. In 1531-2, he spent almost the whole year on chapters 6,7, and 8 John, as much as he spent on Romans throughout the whole of his life. Certainly, the spirit of Saint Paul informs the whole of his work, but his starting point remains the Jesus of the Synoptic Gospels [41].