In the year 1628 […] the holy martyr Athanasios, a Greek by birth, the son of a çavuş [a sergeant, but also a bailiff] who had converted to Islam, was martyred for his faith in Christ, with the collaboration of his father, who had urged him to convert from faith in Christ. From an early age, when he was twelve years old, this holy and blessed man abandoned his parents and the Mohammedan faith and fled to the Holy Mountain, where he became a monk in the monastery of Iviron. 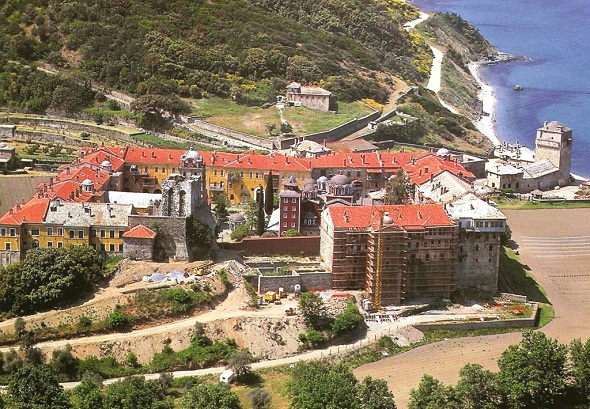 When he’d been in the monastery for eight years, he went to the khan to ask him if there could be a return to the Christian faith for his mother and father, who was a harsh, rich infidel, by whom he was not convinced with flattery and threats, both from the man himself and from the educated emirs, with promises and blandishments to renounce Christ and his truth and accept the depravity of Mohammedan perdition. But when he discovered that the faith of the saint was as firm as an unbreakable diamond, they beat him, and saw his persistence in Christ and then his own Godless father brought charges against him to the kadi and […] demanded that he be brought [to trial] and insisted.

They arrested him and bound him tightly and after three days he was persuaded [= an attempt was made to persuade him] by the emirs and other prominent infidels to renounce Christ, but they, when they were unmoved by the spiritual words from his mouth, which were like a sharp sword of the faith of Christ, ordered the servant of Christ to be beaten harshly in prison, where he suffered terrible tortures, but he showed even greater endurance.

After this terrible and dreadful torture, on the third day he was still unmoved and, when the governor of the prison with his guards went to see what he was doing, they saw that two young men were sitting next to him, dressed in bright white garments and were speaking to him from behind. They understood then that Christians had secretly entered, and were strengthening him in his faith, so they hurried to his father and acquainted him with this. He became as angry as a wild dog, hastened to the prison and, as soon as he opened the door, saw the two holy angels of Christ sitting there and, thinking they were men, rushed furiously at them to beat them, but when he got there he found only his son.

He caught hold of his son like an executioner, took him out of prison, accused him of being a magician and, through his own persistence and the illegal court order, he brought his son to the market, beating and tormenting him. Here, having prepared wood and other materials, they tied him to a column and set him on fire, while he prayed and whispered: “Lord, receive my soul”.  And when he gave up his soul to his Lord and God, whom he invoked, a great and fierce storm began in that part of the city, which brought terror to one and all, and the Godless father and the kadi, or rather the unjust judge, out of fear of this tremendous storm, on the same day, immediately and both together, breathed their last.

But the mother of the blessed martyr, observing all this, came to herself and, abandoning the Turkish delusion and all vanity, with secrecy in that place, after she had paid a janissary a high price for the head of her son, came to Thessaloniki and as a nun found repose in the monastery called Saint Paraskevi, with the name of Athanasia. To the glory of Christ our God, there is, in the Monastery of Iviron, the uncorrupt right hand  of the blessed martyr, which exudes fragrance and works miracles.

The eye-witness Prokhor Koblyanskij, great schema monk of the Monastery of Iviron.

Commentary on the above by Prof. A-E. Tachiaos, Emeritus Professor of the Aristotle University of Thessaloniki and Member of the Athens Academy.

The martyrdom took place in 1628. [The account was written by] the Ivirite monk Prokhor Koblyanskij, who declares that he was an eye-witness of what he describes. [It] was written in the informal Ukrainian of the 17th century, with strong elements of Polish origin, which leads us to conclude that the author  came from the Western Ukraine. The language of the narrative is undisciplined, without syntactic cohesion, at certain points difficult to understand and this demonstrates that the man who wrote it had little by way of education […] Be that as it may, the monk Prokhor preserved the story of the martyrdom of a heroic young Athonite monk, which lay ignored for almost four centuries. It ought also to be noted that the text displays signs of wear and tear, which are marked as … in the translation.