One of God’s greatest Prophet in the Old Testament is the Prophet Elijah.  He lived and prophesied, according to the Books of Kings (III Kings 17:1 – IV Kings 2:18), during the days of Achaab (873-854 B.C.) and Ochozia (854-853 B.C.).  His zeal for the true faith in the one and only God of Israel led him to resist against the evil queen Jezabel, who abandoned the true God and ordered the Israelites to worship the false god Baal (III Kings 16:29-33). 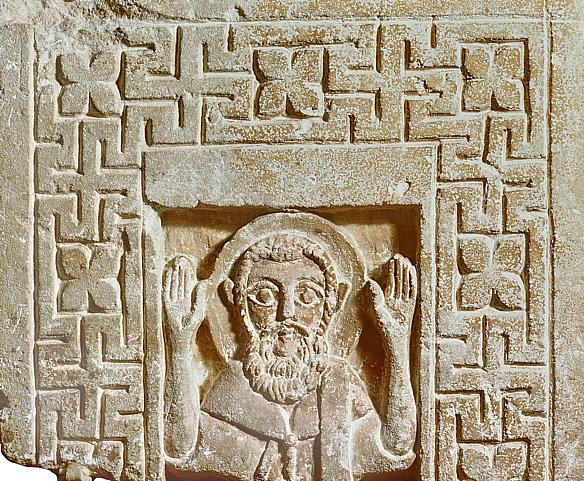 King Achaab and the wicked Queen Jezabel persecuted the prophets and the priests of God, and many of them were inprisoned and put to death.  God foretold Elijah, that Jezabel seeked to kill him and he fled into the desert, at the torrent of Chorrath (today: Badi Jiambis), near the river Jordan.  God provided that a raven visit and feed His Prophet bringing him bread in the morning and flesh in the evening (III Kings l7:2-6).  But when the stream of Chorrath dried, Elijah left to Sarepta of Sidon. There he was welcomed into the house of a poor widow and through his prayers God blessed the oil and flower jars, so that they will never be empty.  In that period the widow’s only begotten son died and Elijah prayed to God of Israel to bring back the soul of the young man.  The miracle took place and the Prophet of God gave the widow her son in full health (III Kings 17:7-24).

Elijah appeared to King Achaab and chalenged the false prophets to prove who is true God, the God of Israel or Baal (III Kings 18:16-40).  Four hundred and fifty priests of Baal gathered at the mountain of Carmelos (III Kings 18:22).  Elijah order that two altars should be built and two bulls should be sacrificed.  Whichever god would send flames of fire from heaven and burn the offerings, He is the true God.  They all agreed.

The priests of the false god Baal prayed from sunrise to sunset and nothing happened (III Kings 18:24-28).  When Elijah prayed he ordered that the sacrificial bull be placed on the altar and that water be poured over the altar three times, fire immediately came from heaven and burnt everything (III Kings 18:36-38).  Nothing was left, even the ground sorrounding the altar with the rocks was burnt.  After this miracle Elijah order the people to slaughter the false prophets of Baal (III Kings 18:40).

New persecutions followed and the Prophet of God fled to the mountain of Choreb.  There Elijah experienced the presence of God as a voice of thine air (III Kings 19:11-12).

Elijah was taken to Heaven on a chariot of fire (IV Kings 2:11), and gave to his disciple Elissaios his blessings to have twice the portion of  God’s Grace which he himself received (IV Kings 2:9).

Elijah is one of the holiest prophets and greatest personalities of the Old Testament. He never left any writings behind.  His zeal to preserve the true faith in God made him well known throughout the centuries till today.

In the Books of the Prophet Malachi (4:4) and the Wisdom of Sirach (48:1-15) his second coming foretells that he shall prepare the world of the coming of the Messiah.  “And, behold, says the Lord, I will send to you Elijah the Thesbite, before the great and glorious day of the Lord comes; who shall turn again the heart of the father to the son, and the heart of a man to his neighbour, lest I come and smite the earth grievously” (Malachi 4:4).

In the New Testament the Prophet Elijah appeared with Moses on Mount Tabor at Christ’s Transfiguration (Matth. 17:1-8; Mark 9:2-13; Luke 9:28-36).  According to the Book of Revelation, before the Second Coming of Christ, the two Prophets Enoch and Elijah will come again and they will prophecy for three and a half years (Rev. 11:3).  “When they finish their testimony, the beast that ascends out of the bottomless pit will make war against them, overcome them, and kill them” (Rev. 11:7).  After three-and-a-half days the breath of life from God shall enter them, and they shall come back to life, and great fear shall fall upon those who killed them.  They will ascend into heaven “in a cloud” (Rev. 11:12).

In the New Testament Christ Himself used the Prophet Elijah as an example to describe the zeal of St. John, the Baptist.  “He  will also go before Him in the spirit and power of Elijah, ‘to turn the hearts of the fathers to the children’, and the disobedient to the wisdom of the just, to make ready a people prepared for the Lord”(Luke 1:17). When our Lord was asked by His disciples: “Why then do the scribes say that Elijah must come first?” He replied saying: “Indeed, Elijah is coming first and will restore all things.  But I say to you that Elijah has come already, and they did not know him but did to him whatever they wished” (Matth. 17:12).   “For all the prophets and the law prophesied until John.  And if you are willing to receive it, he is Elijah who is to come” (Matth. 11:13-14).

Today, our Holy Orthodox Church throughout the world celebrates the feast day of the Prophet Elijah.  In his simplicity of heart and love for the true God of his forefathers Elijah stood up against evil men of worldly power who changed the true Faith into falsehood and worshipped Baal.  In our days, the Prophet Elijah is still preaching to the people of God repentance.

Today, Elijah says to us, ‘Turn your hearts to the Lord in purity of the true Faith and do not allow false teachings to enter into your hearts’.

Today, the Prophet of God cries out to us saying, ‘Let no one worship the false gods of Baal!  Let no one bow before idols of the twentieth century.  Man turned away from God, worships as false gods: money, pleasures of the flesh, riches and earthly possessions!

Today, the Prophet Elijah cries out to us saying: ‘The Lord God is alive and He will judge His people according to their deeds. Repent and turn to His Loving kindness and you shall see His wonders’.

Today, more than two thousand and eight hundred (2,800) years have passed from the time that the Prophet Elijah preached and still he is alive in Heaven and his voice is heared within the Church. Let us hear his voice.  Let us turn to God.  Let us leave our wicked nature behind us.  Let us glorify Christ our God through a virtuous life, and let us cry out:  “Truly the Lord is God; he is God” (III Kings 18:39).