An Orthodox Christian Response to Beheading by Muslims 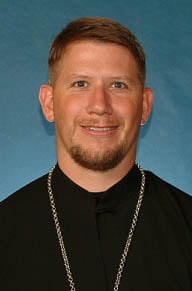 I am an unworthy man, unworthy to be called an Orthodox Christian, not to speak of the priesthood, and I write, admittedly, from the comfort of my Mount Pleasant, SC, home. There is no Mount nearby, but it is, indeed, a pleasant seaside community on the East Coast of the United States.

As such, I ask myself: how to deal with ruthless, pitiless, pitiful souls who are so darkened that their life is spent taking the life of others – and worse, thinking that they are doing this at the direction of and with the blessing of God himself, with eternal reward?

Perhaps I will be criticized for my suggestion, sitting in my pleasant, mountless town, but we read recently that we must receive the Gospel as a child; and even a child will ask how could murder be returned by murder.  Is violence – individual or large-scale – a possible Orthodox response?

What were the apostolic and post-apostolic, and later saint’s reactions to such vicious, vile, demonic actions? 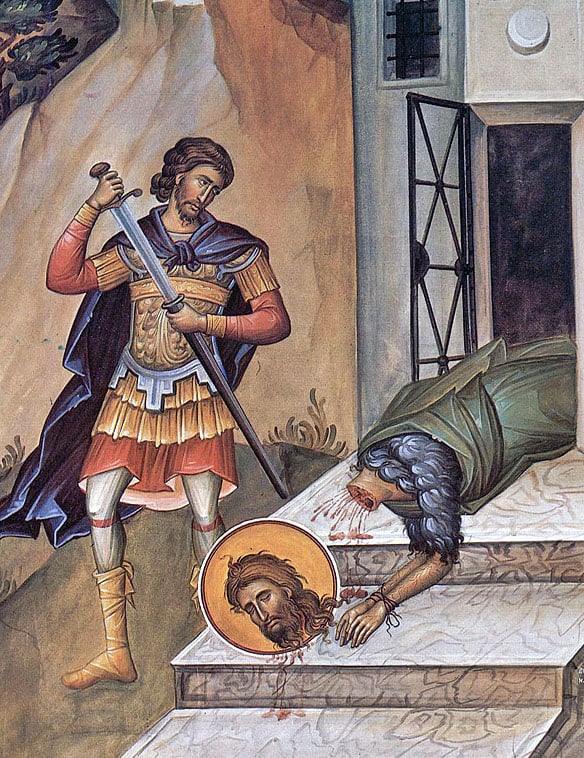 The beheading of Saint John the Forerunner

How did the disciples respond to the beheading of John the Baptist, which we commemorated on August 29?

On the precipice of martyrdom, St Stephen, the Proto-martyr begged God to forgive his killers.  Was there an apostolic uprising following that?

Hieromartyr Eutychius, disciple of St John the Theologian, was beheaded after starvation in prison, an attempt to burn him alive, and cruel beatings with iron rods…which were made to cease by his prayers.  There is no account of retribution.

St Ignatius of Antioch instructed his loyal sons-and-daughters in Christ not to impede his march to martyrdom.  “Do not hold me back from life!” was his essential command.

St Lawrence, the Hieromartyr, whose memory we kept in early August, commanded his captors, who had lit him on fire while encaged, to turn him over, since he was “done on that side”.  There is not a record of retaliation.

The Hieromartyr Cyprian of Carthage, whom we remembered in the Church on August 31 was martyred by the sword as well—he, by pagans.  Among his greatest contributions to the Christian faith was the acceptance of repentance of those who had apostatized, abandoned their one true love, Jesus Christ.  He himself, though defending the true repentance of those who did commit apostasy under threat of death, did not betray Christ.  In his Life, we read,

At the trial, St Cyprian calmly and firmly refused to offer sacrifice to idols and was sentenced to beheading with a sword. Hearing the sentence, St Cyprian said, “Thanks be to God!” All the people cried out with one voice, “Let us also be beheaded with him!”

Coming to the place of execution, the saint again gave his blessing to all and arranged to give twenty-five gold coins to the executioner. He then tied a handkerchief over his eyes, and gave his hands to be bound to the presbyter and archdeacon standing near him and lowered his head. Christians put their cloths and napkins in front of him so as to collect the martyr’s blood. St Cyprian was executed in the year 258. The body of the saint was taken by night and given burial in a private crypt of the procurator Macrobius Candidianus.

There is no record of retribution.

Commemorated on August 16, is St Constantine Brancoveanu, the 18th century ruler of Wallachia—the Romanian lands.  St Constantine was held captive on the feast of the Annunication of the Theotokos, March 25, 1714, by Sultan Ahmet III, in Istanbul.  Having been issued a “convert or die” ultimatum, St Constantine Brancoveanu was forced to watch his sons be decapitated (including the youngest, 11 years old, named Matei), prior to his own decapitation by the sword.   Their heads were paraded on pikes, and the bodies (though later recovered by Christians) were thrown into the Bosphorus.  This took place on August 15, 1714, the Dormition of the Theotokos.  Among the saint’s last words were these:

“Your majesty, you have taken my fortune, but I don’t abandon my Christian law.  I was born and lived in it and I want to die in it (=as Christian). I filled the earth of my country with Christian churches and, now, attaining an old age, should I bow to your Turkish mosques? No, your Highness! I defended my land, I kept my faith I want to close my eyes in my faith and my sons together with me”. After that, he encouraged his sons „My children, have courage! I lost everything I had on this earthly world. We have left only our souls, we shall not lose them too, but we shall get them clean before our Savior Jesus Christ. Let’s wash our sins with our blood!”

The beheading of Brancovan family of saints, contemporary fresco by Sorin Efros

The saints prayed for their torturers, and relentlessly clung to Christ.  To my knowledge, there are no recorded acts of violence returned for violence. It is the case, however, that with Ss Adrian and Natalia (August 26), one of their captors converted by their stalwart faith.  Was this also not the case with the 40 Holy Martyrs of Sebaste?

“Vengeance is mine,” saith the Lord.

We stand proudly with the martyrs, whose blood is the foundation of the Church.  And we beg God to grant us equal strength when we have to face what they did.

In the meantime, could it be that Western Europe and North America are facing “Islamization” not simply because of the sword, but also because:

They have many children, while we abort ours, or simply have few?

While they are spreading their diabolical teachings, we appear unconvicted by the True Faith?

Rather than bolstering a unified voice and front, Orthodox Christians are re-trenching into ethnic enclaves?

Rather than giving generously to further the work of the church, and to forgive as remarkably as we have been forgiven, Orthodox Christians remain tight fisted and petty?

Every single field is white for the harvest.  Will we bear witness to the truth in both our way of life and our way of death?