Charity is a heart burning for the whole of creation

[Saint John the Damascan goes on to say that, if God’s given you power and authority, use it for justice and the support of the weak].

So if you have something to say, if you’re a good speaker, if you know how to present things and so on, then use this for the benefit and instruction of others, in all humility.

And if you have the power of prayer, because you’ve got a pure heart, then, with lots of tears, put this at the disposal of those who are weaker than you. For the assistance of everybody. 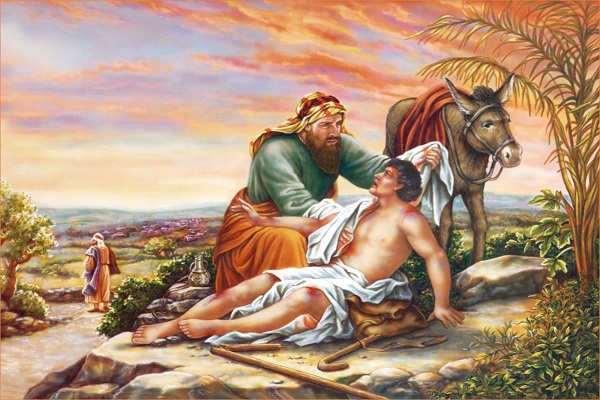 This is what Saint John tells us in his analysis of the Lord’s Beatitude, where He says ‘Blessed are the merciful, for they will receive mercy’.

What Saint John is saying is that the merciful (charitable) aren’t only those who give material goods, but also those who offer words of salvation, with humility, and prayer, with tears, in secret. And God, Who sees in secret, will reward you openly.

These days, there are really very few who have material needs. But everyone has the spiritual need of faith.

This is why Saint Isaak the Syrian assures us that the virtue of spiritual charity is incomparably greater than any offer of material goods. ‘Charity is a heart burning for the whole of creation’.

For all things in heaven and on earth. Even for the demons and those in the nether world. A heart burning for them, too.

This is rather bold and should be discussed in confession and is for those who have somewhat more fervent prayer. Saint Isaak is categorical: ‘For those who are already experiencing a foretaste of the torments’. And ‘for the whole of creation’. And ‘ from the remembrance of them and at the sight of them, their eyes shed a great many tears’.

Ascending even further, Saint Isaak the Syrian tells us that serenity of the mind, with prayer of the heart and fervor, is greater than being charitable with gifts of money and material goods and the like. He says: ‘Inner peace and serenity of the mind, together with prayer of the heart, especially at night, in all obedience, is of greater value than feeding the hungry and teaching those around you’.

We see this particularly in the figure of the great Saint Arsenios, whose feast it is today [8 May]. Not that there’s no need for material assistance, but, from a spiritual point of view, works of the prayer of the heart are more important.

But we know that God rewards us even for a cup of cool water that we give to a thirsty person. He tells us that we will not lose our reward (Matth. 10, 42).

Besides, at the Second Coming He will reward those who did practical works of love: ‘I was hungry and you gave me food, I was thirsty and you gave me something to drink, I was a stranger and you welcomed me, I was naked and you gave me clothing, I was sick and you took care of me, I was in prison and you visited me’… And since you did this for the least of my brethren, you did it for me’ (Matth. 25, 35-6, 45).

But all these works of love and charity should be practiced with discretion, where they’re needed. Where is that? How much? When? And with a glad heart, because ‘God loves a cheerful giver’.

And finally, let’s not forget the Scriptural reference that those who give charity to the poor are lending to God. And they’re repaid with interest, not only at the Second Coming, but here, too, insofar as they struggle against the evil of the sins of the passions.