‘One of the elders told us the following:

Abba Theodoros Iliotis used to talk about a great ascetic who lived as a recluse on the Mount of Olives and was constantly being attacked by the demon of lust. One day, after a particularly severe attack, the ascetic began to lose heart and he said to the demon: “How long are you going to continue with this? Just go away. We’ve grown old together”. 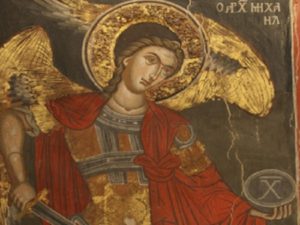 Then the devil appeared to the monk, in full view, and said: “Swear that you’ll not tell anybody else what I’m about to say to you and I won’t fight you again”.

The elder swore: “By Him Who resides in the heavens, I won’t tell anyone”. Then the demon said to him: “Don’t venerate this icon and I won’t bother you”. The icon depicted Our Lady holding Christ in her arms. The recluse said to the demon: “Let me think”.

The next day (according to Abba Theodoros Iliotis, who told us this and was at that time living in the lavra of Faran) the man sent for Abba Theodoros and told him everything.

“Well, abba, you were certainly tricked into swearing. But you’ve done well to reveal it. Because it would be better for you to enter every brothel you see in this land than to refuse the venerate Our Lord Jesus Christ and His Mother”.

He supported and fortified the elder with more words and then returned to his own place. The demon appeared again to the recluse and said to him: “What is this, wicked elder*? Didn’t you swear to me that you wouldn’t tell anyone? Yet you revealed everything to that man who came to you. I’m telling you, wicked elder, that on the Day of Judgment you’ll be condemned for perjury”.

The recluse replied: “I know that I swore and that I broke my oath. But I didn’t commit perjury against my Lord and Creator. I won’t listen to you. Because you’ll receive unavoidable punishment, since you were the instigator of the bad advice and the perjury”’.

Metropolitan Meletios (Kalamaras) of Nikopolis and Preveza has this to say about the story:

‘What are we to conclude from this:

The author of ‘The Spiritual Meadow’, Saint Ioannis Moskhos (John Moschus) whose feast is celebrated on 11/24 March, was born in Damascus in 545, in other words when it was still part of the empire of New Rome (‘Byzantium’). He became a monk and then travelled extensively with his friend and pupil Sofronios, later Patriarch of Jerusalem, who was also canonized and shares his feast day with Ioannis.

Apart from the edifying stories it contains, the text is also interesting from other points of view.

In the first place, Saint Ioannis-  unusually for the time- is meticulous in his attribution of his sources. Even in the example above, although the recluse is not named, the author is careful to record that the narrative is directly linked to Abba Theodoros himself. In other collections of the period, the stories usually begin simply ‘One of the elders told us…’.

By the same token, Saint Ioannis’ work provides valuable background detail regarding the places he visited and the various practices of the ascetics he met.

The work is also excellent source of information about ordinary sixth century Greek. The language in the Meadow stands roughly in the same relationship to that of the Fathers as the Gospels do to the Epistles, and for much the same reasons. As the Gospels do, Saint Ioannis is relating a series of narratives; the Epistles and the works of the Fathers are largely aimed at explaining these narratives and putting them into a theological context. So his language is informal, engaging and refreshing.