Close to Christ and Far from Him

A. Far from Christ. From today’s Gospel reading [Luke 5, 1-11]: ‘We’ve worked all night long and haven’t caught anything’, says Peter to Christ when the latter tells him to let the nets out again*. So, away from Christ, it was ‘night’ for them. They worked the whole night long and caught nothing, meaning a lot of effort to no avail. Away from Christ there’s night, labour and unproductiveness. Indeed!

We have two eyes through which we receive the light of the sun and there are two things which sink our soul into the depths of night: lack of faith and sin. It follows that people are always benighted if they don’t believe in Christ. Or if they do believe but live in sin. 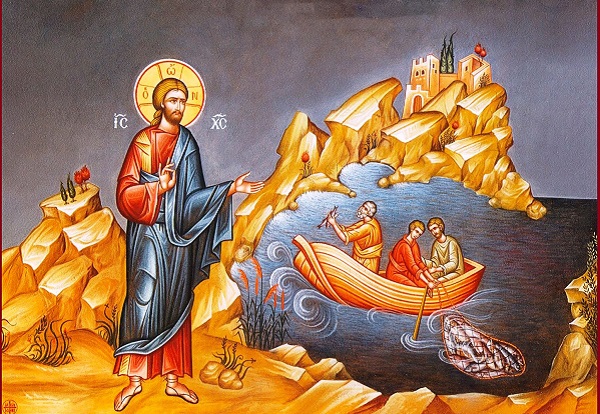 Do you want proof? Look at the pre-Christian past, when people struggled to find the truth and couldn’t. Even the wisest of the Greeks wallowed in polytheism and the wisest of all, Socrates, confessed his ignorance: ‘The only thing I know is that I know nothing’. Do you want proof of this? Look at the present, within us and outside us, where the passions reign. Look at your own passions and those of others. Darkness! Avarice, gloating over other people’s failures, jealousy, envy, hatred, egotism and so on all have a common feature which unites them: darkness! So the unbelievers and the sinners, those who dwell forever in the darkness of night, know neither where they come from nor where they’re going. They’re stumbling around aimlessly.

But there’s also the labour involved. Night, which is caused by the lack of material light, is useful for rest and the recuperation of our bodily and spiritual powers. But the spiritual night of disbelief and sin provides neither of these. On the contrary, it brings fatigue. A disbelieving philosopher is not only in darkness and unable to find the truth that will calm his or her heart, but is also incapable of not seeking. They know that they’re labouring on behalf of wickedness, because philosophy tells them so, since it’s the history of delusion. But they can’t help seeking. The same’s true of sinners. They’re all darkness and effort. Do the avaricious, the mistrustful, the spiteful, the jealous, the wicked and the egotists really have it easy?

But the unbelievers and sinners aren’t afflicted only with darkness and labour, but also with unproductiveness. What have the unbelievers ever managed to give us through philosophy? Nothing. Even the Ancient Greeks, with their philosophy, their arts and their literature, still praised the gods of Olympus and the abduction of the goddesses. What fruit do the passions bear? In particular, avarice? During the German occupation of Greece, there was a family that had become rich from the blood of the Greek people. They were found in possession of a bar of gold and were murdered for it. What’s the result of the egotism of some great states? Shame and humiliation. What’s the fruit of a lust for riches? An outcry from the people, a curse, and, worst of all, the birth of communism.

So, away from Christ we have worry and no benefit.

B. Close to Christ. From the Gospel, again. After the dawn, the notional sun, Christ, appeared. At His command, they cast their nets again, they repeat the same tasks and this time they catch a large draught of fishes. With Christ, the fishermen not only gained a large catch of fish and a sense of humility towards Him, but they also ‘caught’ a large number of people, whom they enlightened. So, when you’re close to Christ, there’s light, effort and productiveness.

Look at life. The work of believers is illumined, because they’re in the light and know what they’re doing. Everything has its place. Everything is in the right order and in a proper relationship to everything else. Just as a good housewife knows where she’s put everything, so believers have organized their inner world with everything on the right shelf in the cupboard. And their innermost secrets will stand up to exposure to public inspection and to the scrutiny of God. Light makes clean things even cleaner. Believers work hard productively. They’re aware of who they are, just as Saint Peter was [in today’s Gospel: But when Simon Peter saw it, he fell down at Jesus’ knees, saying, ‘Go away from me, Lord, for I am a sinful man!’]. If they’re extremely clever, they look at a little flower in a field, and are humbled. If they’re virtuous, they look at the sanctity of Christ, Whom they always have before them, and are humbled. If they’re mighty, they look at the all-powerful Lord and His works and keep their feet on the ground. Their speech is ‘well-seasoned’, that is, full of wisdom and grace. They’re careful that no unwholesome words pass their lips, but only what is good and constructive. Although they’re generous, they’re careful about how they dispense with their goods, so as to avoid waste. Instead, like the Lord, they ensure that they multiply the loaves and collect the leftovers, so that nothing will be lost, as the Lord commanded. That’s a great effort.

Their work is very productive. Because they’re aware of their weakness and because they’ve put their inner house in order through the light of Christ, they’re productive. They see what they have and glorify God. They see what they’re lacking and are humbled. This is the way in which they make progress. Christians can be seen to have great productivity, because the world is full of works of Christian culture. And believers who are considerate with their speech, their possessions and their thoughts are very productive and exert a great influence on other people.

Behold those who are far from Christ and those who are close to Him. Behold the darkness, the labour and the unproductiveness of the former; and the illumination, the effort and the productivity of the latter. What should we do? We should approach Christ, the light, the serenity and the abundance if we wish to avoid darkness, worry, sterility and anxiety. Amen.

Fr. Ioïl (Joel) was a remarkable man. One of nine children, he appeared to have severe learning difficulties at school. But at the age of 23, he became a monk, then deacon and, soon afterwards, a priest. He went on to produce 26 volumes of notes to the Old Testament, for which he was honoured by the Academy of Athens. He also wrote extensively about the New Testament.

* Although we have no way of knowing what the Lord actually said to Peter, since it would have been in Aramaic or Hebrew, Saint Luke’s rendition of the encounter confirms what we know of Peter’s bluntness from other passages. He’d been up all night trying unsuccessfully to net a catch and somebody he doesn’t know- and presumably knows nothing about fishing- tells him what to do. He’s not impressed. He says: ‘Look, boss, [the Greek doesn’t mean ‘master’ and it’s safe to assume that Peter was more than a little irritated], we’ve been working all night and haven’t caught a thing’. But there must have been something about Christ’s presence that persuaded him to follow the instructions. After they’ve caught the fish, he addresses Christ as ‘Lord’. WJL.