In the Prison of Târgu-Ocna

‘No matter how bad pain is, it has no meaning other than the cleansing of the soul which longs for salvation’ (Valeriu Gafencu).

The prison in the town of Târgu-Ocna was an oasis in the desert of pain. Not that there was no pain there. On the contrary. Pain, sickness in all its hideousness, and death all had their home there. Even though it was a sanatorium with slightly better living conditions and arrangements, it was still a prison. But I believe that God’s mercy overflowed there onto the pain. The Cross was considered the gate to heaven.

Into this atmosphere something greater than a community was born. There was a thirst for culture and, in particular, a thirst for Christ, which marked the life of the internees of Târgu-Ocna. There were young men who knew the whole of the New Testament by heart. And, of course, prayers, akathist hymns and supplications. 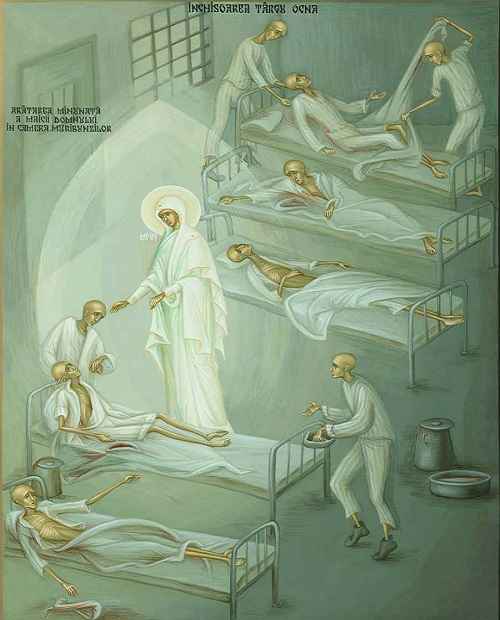 Prayer of the heart was also practiced there. Valeriu Gafencu and Ioan Ianolide, brought the spiritual experience of the prison of Aiud, while those arrested after 1948 brought the hesychastic experience of the theological and cultural movement ‘The Flaming Bush’, originating from the Holy Monastery of Saint Antim Ivireanu in Bucharest, where they had met great spiritual fathers. With the blessing of the priests, they invoked, day and night, the Name of the Power of Our Lord, Jesus Christ. Mystical events occurred there and true sacramental experiences.

Poems and profound thoughts had their origins there, music was written and we read a great deal. We felt and experienced moments of holy and genuine joy.

The medical care was organized under the angelic and maternal care of Doctor Margareta Danielescu, together with other doctors who were interned. How can one forget the young men, who were also ill with tuberculosis but still had a little more strength than the others, and who, with moving though natural and discreet generosity, acted as nurses, servants and cleaners, washing clothes and sheets covered in phlegm, working day and night as if for Christ and sitting at the pillows of those who were more seriously ill.

This is how people lived in the prison at Târgu-Ocna.

Târgu-Ocna (Ocna means salt mine). Valeriu Gafencu was born on the 24th of December 1921, in the Northern part of Romania, near the Russian border of that time. His parents were both active Orthodox Christians. His father was to be deported to Siberia by the Russians in 1940 for his pro-Romanian activity. When he was in high-school, Valeriu joined an Orthodox youth organization called the Cross Brotherhoods, and, when this became illegal during the second World War, he was arrested and condemned to 25 years of hard labour. He was only 20 and, at his trial, his fellow students and teachers would come and defend him, pointing out his innocence and wonderful human qualities. At first he was sent to a prison called Aiud. By his deep Orthodox feeling, kindness and rich life of prayer he managed to influence a huge number of people, many of which he never met, but knew him from stories that were on everybody’s lips even before he passed away.

After some time the majority of imprisoned students were sent to a special prison called Pitesti, were they were to be re-educated (here took place the horrific and famous Pitesti experiment).

Valeriu was held in Pitesti only for a short period of time because from all the torturing, the cold and terrible hunger he became very sick with tuberculosis (a very contagious disease) and was sent to a penitentiary TBC hospital called Targu Ocna.

His arrival in this penitentiary hospital was felt by the other prisoners (who knew his reputation) like a miracle. Valeriu would transform this sordid jail living into a truly Christian life. He is the blue-eyed angel who obliges, by his very presence and prayer, to think about repentance and start praying, who would strengthen the ones around him and transform them inside for the rest of their life.”

Valeriu died on the 18th of February 1952, at Targu Ocna. His last words were: “Don’t forget to pray to God that we all meet there! Lord, give me the servitude that sets the soul free and take away the freedom that enslaves my soul!” His grave remains unknown for at that time all the prisoners were buried in a common pit and their head was smashed so that it would be beyond recognition. However, he asked to be buried with a small silver cross in his mouth and if God allows his holy relics may be found.

Fr. Constantin also has this to say about him: Among the many portraits of the confessors, one will be found in particular that is recalled with reverence by all and is considered a saint: Valeriu Gafencu. Nicknamed “the saint of the prisons” by Father Nicolae Steinhardt in a truly inspired moment, Valeriu Gafencu was one of the more impressive figures who lived an admirable spiritual life amidst prison conditions. Through his sacrificial love springing from a perfect dedication of his life to Christ, he remains painted in the most luminous of colors in the hearts of those who knew him. Father Gheorghe Calciu wrote, “I have no doubt that he is a saint. He lived the word of God to such a level that it was incomprehensible for us.”. Another companion in suffering, Father Constantin Voicescu, is convinced that “Sooner or later, the Orthodox Church will canonize him.”