On the Birth of the Mother of God

We all know that the beginning of any fruit is the flower. It’s also clear that the beginning of our salvation is God’s decision regarding Mary, the Spotless and Pure Ever-Virgin. As we honour this birth today, we celebrate it as being of great importance. Because, in order that the whole year might be blessed by her, she was born in this month, which is the first of the Church’s year; and then she fell asleep into immortality in the last month, so that the intervening 10 months were all blessed by her birth and her life-giving dormition. We’ll briefly mention her birth and say whatever her grace inspires us to express.

The parents of this child of God were Ioakeim and Anna, descendants of the royal house of David, of the tribe of Judah. They kept the law and were meticulous in their observance of the commandments. They were very rich in material terms, even richer in the Godly virtues, but poor in terms of children, because Saint Anna was sterile. For this reason, they were often shunned by other Jews and the priests refused to accept their double contributions. With no sense of shame, they mocked them for their lack of progeny. 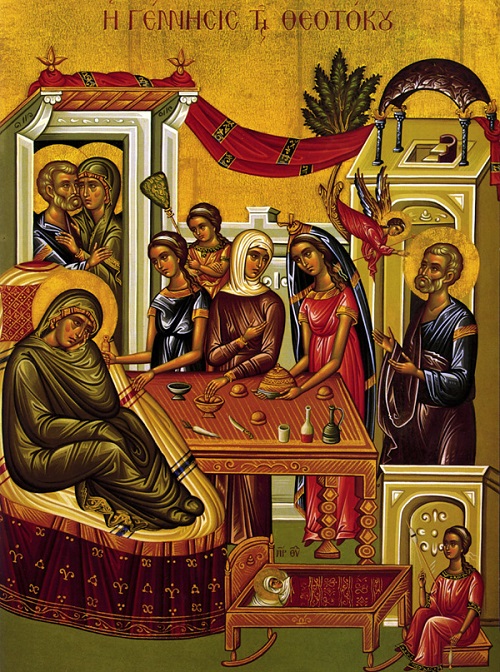 And so the righteous Iaokeim, saddened and cut off from all human interaction, withdrew to the desert, where he fasted for forty days. With tears and fasting, he entreated the Lord, saying: ‘Free me, Lord, rid me of the shame and contempt and allow me to have a child. If you do, I’ll offer it to Your goodness, Lord’. In this way, after making supplication to God’s love, the righteous man gained what he desired. As Scripture tells us ‘the righteous cried aloud and the Lord heard them’ [Ps. 33, 7 Septuagint]. The most merciful Lord quickly concurred with Ioakeim’s plea in order to set in motion, through the child, the pre-eternal, destined, veiled mystery. This is why God sent an angel to tell him ‘the Lord has heard your entreaty’ and that Anna would conceive and give birth to a child who would be renowned the world over.

The righteous Anna, meanwhile, sat, heartbroken, in her garden weeping for two reasons: the withdrawal of her husband and her inability to have children. She said: ‘I’m not even like the birds of heaven, because they’re not childless in the sight of God, nor are the animals on land or the fish. But I have no progeny to offer Him. But if, my Lord and God, you permit me to bear ‘fruit of the womb’ then I’ll offer the child to You’.

As she was saying this to God, she, too, received a visit from God’s angel, with the same glad tidings regarding the birth of a child. When her husband returned from the desert, he sacrificed a great many animals and served a rich and plentiful banquet to everyone around. The Creator of all things having freed Anna of her inability to have children, she become pregnant with the child of God Mary who was born on this day. She is the inauguration of our salvation, the pure Mother of the Word of God, the beginning of the renovation of our nature, which was destroyed and eliminated by the transgression against the divine commandment. And in accordance with God’s word, just as a little leaven causes all the flour to rise, so in this instance, through the God-made and totally pure leaven that is the Mother of God, the Creator has made all the flour of our spoiled nature rise. He’s reworked it and made it new. This is the strange wonder which astonishes us: that most pure Baker united Himself to this untainted leaven and, having taken a small part of her in wondrous wise, transformed the whole of our human nature. This is why He says: ‘I am the bread of life and whoever eats of me will not hunger’ and so on.

The godly parents of the pure child of God fulfilled their promise to God when, three years later, they offered her to the Holy of Holies, into which she made her way accompanied by virgins bearing lighted candles. This also saw the completion of the psalm [44 Septuagint] ‘the virgins accompanying her shall be brought before the king’ (God) and ‘they shall be brought into the temple of the king (Solomon’s) and ‘Listen, daughter to my advice and see. Completely forget your people and your father’s house so that Christ, the King of Glory, may desire your beauty’. And this is, indeed, what happened. She forgot her people and her father’s house and instead resided in the Lord’s temple, in the Holy of Holies. In order that the Scriptures might be fulfilled, she dwelt on a daily basis in the place where the high priest went only once a year.