Saint Isaak the Syrian and the Wisdom of his Ascetical Homilies

Not much can be stated with certainty about the life of Saint Isaak. He is believed to have been born in Beth Qatrye (‘region of the Qatars’) in the Arab peninsula, near the Persian Gulf. He entered a monastery as a young man, was consecrated Bishop of Nineveh, didn’t enjoy being an administrator, so resigned after five months and withdrew to the wilderness, where he lived a very austere ascetic life. Eventually, blindness and old age forced him to retire to the Monastery of Shabar in Mesopotamia, where he fell asleep in the Lord. Much has been made, also of Isaak’s supposedly Nestorian leanings, but recent research suggests that the Church of Persia, while aware of Nestorius’ teaching, had not adopted it, except insofar as to rebuff Monophytism. In any case, the proof of his Orthodoxy is that he has been trusted for centuries by the most scrupulous of readers and has never been found to be in error. Isaak is not one of those saints who was canonized for their lives, such as Saints Cyril and Methodius. The reason he was canonized is that he was able to pass on the wealth of his spiritual experience to us through his writings. Some extracts follow. WJL. 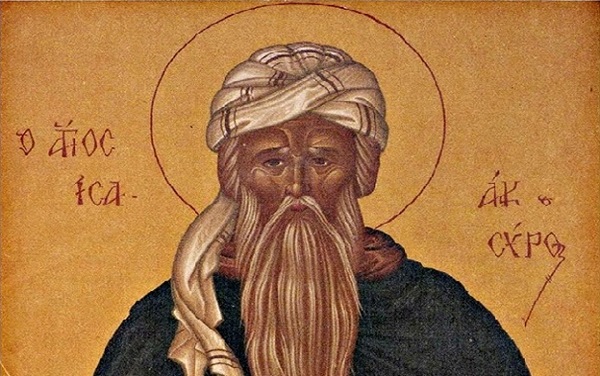 In all of our activities, continual reprimands from our conscience are a sign of humility, and lack of them is an indication of a hard heart. The latter shows that we’re in the habit of justifying ourselves and condemning our neighbour, or worse, God’s wisdom and providence, instead of blaming ourselves. You’ll never cross the threshold of humility unless you believe you’re not beyond reproach.

But those who have a strict conscience and see for themselves that they deserve great misfortunes have reached a high level of humility. Such people are in a state of peace and serenity, and are unflappable, whatever the situation. This state of repose is the gift of humility and the fruit of perfection. Those who have attained it find, in every temptation, a repose which overcomes the pain.

Turn your gaze to the distant causes of events, which remain hidden. Don’t be troubled by God’s actions which are performed through other people, nor by the external aspect of your misfortunes. In this way, through your sufferings you’ll discover knowledge of the truth, humility and many other blessings.

God is always looking to forgive, and surrounds us with the boundless and measureless ocean of His Grace. In order to save us, he uses even the tiniest of stimuli, so small that you would hardly say they existed at all. He also uses events that seem to be accidental and fortuitous coincidences.

The theologian Alexandros Christodoulou has this to add:

According to Abba Isaak, faith is the first stage of liberation from subjection to the world and the passions. With the aid of this, people wake up and begin to perform virtuous works (fasting, vigilance, study of the Scripture, vigils and prayer) They are then able to find within their hearts an entry into the kingdom of heaven. Through the hesychast life and silence, which are ‘the mystery of the life to come’, a monk can see marvellous circumstances which are beyond the conception of the human spirit. Through the cleansing of the heart, he’ll be able to attain and to make progress in humility, the ‘raiment of the divinity’, because this is what the Word of God clad Himself in so that He might become a human being. Humility includes all the other virtues and gives us the purity to be able to see everyone else as good and innocent.

As they progress in humility, the mind of hesychasts is cleansed and illumined through the experience of the various degrees of prayer and is brought to pure prayer. In this state, the mind tastes the Grace of God, sees God, is united with Him and enters His Kingdom. People thus purified and pacified will become for everyone else an image of the love of God and of His loving-kindness.

In the Greek calendar of the saints, Saint Isaak did not have a specific day dedicated to him. He used to be commemorated on 28 January, together with another great Syrian Father of the Church, Saint Efraim. But for some years now, on the initiative of Saint Paisios the Athonite, a service has been written for him and 28 September has been chosen as the day for the celebration of his blessed memory.