Sermon on the Precious and Life-Giving Cross (part 1)

The Cross of Christ was forecast and mystically predicted from of old and no-one has ever become reconciled to God without the power of the Cross. After the transgression of our forefathers in God’s paradise, through the tree, on the one hand sin spread and, on the other we died, having suffered the death of the soul- separation from God- before that of the body.

God is spirit and goodness and virtue and our spirit is the image and likeness of His. If we’re to be renewed and reconciled to God in spirit, sin must be eradicated. This is Christ’s Cross. 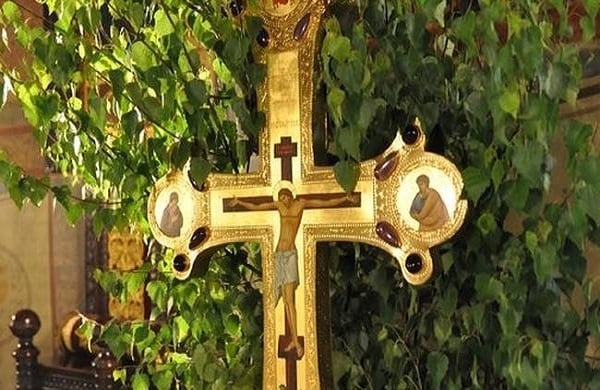 Many friends of God were in evidence before God and the law, even prior to the appearance of the Cross. David says: ‘But, God, your friends have been greatly honoured by me’ (Ps. 139, 17 [Septuagint]). How then were there friends of God before the Cross? Because the mystery of the Cross acted within them.

Let’s begin first with Abraham. God told him to leave the land of his birth and his family and to go to the land He would show him. He didn’t say ‘the land I will give you’, but ‘the land I will show you’. These words bear the mystery of the Cross within them.

After Moses had left Egypt and gone up onto the mountain, God told him to unfasten his sandals from his feet. This is another of God’s mysteries. He was to rid himself of the leather footwear through which sin acts and which separated him from the holy ground. He was no longer to live in sin and in the flesh, and life which was opposed to God was to be abandoned and killed off. As Saint Paul puts it, the flesh is to be crucified together with the passions and desires.

Abraham was granted the most wonderful vision when he saw the three Persons of God at the Oak of Mamre (Gen. 18, 1), and the mystery of the Cross was active in him when he sacrificed his son, Isaac. Isaac himself was a model of Him Who was nailed to the Cross, because he was obedient to his father unto death, as was Christ. And the ram which was given to Abraham to sacrifice on our behalf, as well as the plant to which it was tied, also contained the mystery of the model of the Cross, which is why it was called ‘Selichah’, the tree of forgiveness, just as the Cross is called the tree of salvation.

The mystery and model of the Cross also acted in Jacob, Isaac’s son, because he increased his flock with wood and water. The wood prefigured the wood of the Cross, while the water foreshadowed holy baptism, which also contains within it the mystery of the Cross. When Jacob prostrated himself at the end of his staff and when he blessed his grandsons (Gen. 48, 9-20), these actions prefigured the Cross even more clearly.

In the same way as the mystery of the Cross acted in Abraham and as his son, Isaac, was a model of Him Who was later crucified, so, too, the mystery of the Cross informed the whole of Jacob’s life, and his son, Joseph, was a model of the Divine Word and His later sufferings. Because he, too, was led to the slaughter through envy and, indeed, by his kinsmen after the flesh. He wasn’t actually slaughtered, just as Isaac hadn’t been, but this is nothing to wonder at, because they were not the truth, but models of the future truth. Slaughter prefigured Christ’s suffering in the flesh, while the avoidance of passion foreshadowed the impassivity of the Godhead.

Let us return to Moses, who was himself saved with wood and water, when he was exposed in a basket on the waters of the Nile. (As we’ve said, wood and water prefigure the Cross and baptism). But Moses went further in foreshadowing most clearly the model and even the shape of the Cross and our salvation through it. Because when he stood with the rod and crossed his hands over it, he routed the enemy (Ex. 17, 8). Moreover, when he placed the bronze serpent lengthwise on a standard, raising it as a model of the Cross, he told those Jews who’d been bitten by snakes to look at it and they would be cured of their snake bites.

There’s no time to explain how the mystery of the Cross acted in so many other people, such as Joshua and the judges and prophets who came after him, David and those came later, who cut off rivers, stopped the sun, destroyed the cities of the impious, were victorious in war, avoided death by the sword, or fire or lions, chastised kings, raised the dead, caused droughts and then, when they wanted, brought rain, and all the other things mentioned by Saint Paul regarding faith in the Cross, in particular, which for us who are saved is the power of God, but foolishness for those who are lost.