The sign of the cross in the signatures of the hierarchy

The inspiration for this brief study was a question about the sign of the cross in the signatures of bishops ‘as a symbol of episcopal authority’.

The results of our research were unexpected. We found that, for many centuries, the cross was used not only in the signatures of hierarchs, emperors and officials, but also in those of all ordinary Christians, even in the cases of the illiterate, who, instead of a signature, made a ‘mark’, the cross, and someone else filled in the name.

It’s clear from this that the cross in hieratic signatures has nothing to do with the authority of bishops, nor with any other human authority, but was simply part of the general usage of the cross in all signatures, clerical and lay.

Naturally, it would hardly be fitting for the sign of the amazing sacrifice of the Son of God on behalf of humankind to come to be a symbol of the authority of certain people over others. Any more than it’s fitting for this sign of Christ’s extreme humility to be turned into jewellery for people to show off as a sign of human vanity.

Be that as it may, it’s moving and wistful to think that once upon a time the cross was an inseparable part of the names of all Christians, men and women, clergy and lay people, governors and governed, educated and illiterate, and that it was present as a vital feature in all the facets and manifestations of their public and private life.
***

a) Paleographic observation
It’s well known that the sign of the cross precedes the signature of a bishop. In earlier times, however, a cross was also placed at the end. So the signature was placed between two crosses (†……………†).

In Greek, the first cross is unusual in that it was joined to the letter ‘o’ which followed it [‘O’ in Greek means ‘the’ and was followed by the name of the see, in the genitive case, so the signature read, for example, ‘Cyril, the (bishop) of Alexandria’]. Of course, initially the two signs had been written separately but then they were joined to form the combination

. An additional feature is that the ‘o’ was written with an ‘ over it, to indicate that, in Ancient Greek, it was pronounced ‘ho’. This ‘ became

At the Synod of May 1590, we see that the cross is placed at both the beginning and end of the lay ‘officiales’ of the Patriarchate [Constantinople was officially New Rome and therefore a great deal of the imperial vocabulary was taken from Latin]. These officials signed in a special place, next to the signatures of the patriarchs and hierarchs.

A brief investigation, however, reveals that all Christians linked the cross to their names. We know that emperors added a cross both before and after their name, and also at the beginning and end of their proclamations. We see this also, however, in all the names of imperial officials, for example the ‘pittakion’ (writing-tablet) from the New Monastery on Khios, which dates back to the year 1045.

The same was true for all priests, hieromonks and ordinary monks. An impressive example is provided by the names of all the hieromonks and monks of Patmos, on the Testament of their Abbot, in the year1157, as well as those of the priests and witnesses at the end.

We see the same thing in the names of ordinary laymen who acted as witnesses to legal contracts.

Crosses were also placed before the names of ordinary Christians listed in various documents, such as, for example the catalogue of those dressing the vines at a particular monastery in about 1188.
***

c) The ‘signatures’ of illiterate Christians
There is also the special case of the sign of the cross with the names of illiterate Christians, which at that time was the norm. Unable to write their name, they made their ‘mark’, the sign of the cross, at the beginning and end of the document or among other names and the notary or scrivener would add to each cross ‘The mark of ….’

We can see that in 1157, at the Monastery of Patmos, the Abbot, 6 hieromonks and 6 monks signed in their own hand, but the other 60 monks made the mark of the cross. In the Patmos text, this is known as ‘markature’ (through the signature and markature of all the monks of the monastery’).

d) Conclusions
From the few examples we’ve quoted here and from the many others which have been published, we may conclude, firstly, that there is no question of the cross in signatures being linked to the authority of bishops nor, of course, with that of the emperor or any other secular authority, because it was linked, without distinction, to the names of all Christians, clergy and laity, men and women, governors and governed, literate and illiterate.

As to its real meaning, there are a number of interpretations:

– It may be, however, that the crosses meant that these people simply belonged to the Christians and were different from others, since the cross is the distinctive mark of Christianity. This is why inscriptions in Christian churches, from as early as ancient times (such as in the churches of Saint Dimitrios and Holy Wisdom [Ayia Sofia] in Thessaloniki) begin and end with crosses, simply because the content is Christian (sacred text, supplication, commemoration of a historical event).

– It may also be the case that the two crosses at the beginning and end of the name signify spiritual barriers which protect Christians from the forces of darkness. In this sense, we see that, even in the most ancient of times, Christians scratched or placed crosses on the walls of structures, in order to prevent the entry of demonic forces.

– In the practice of notaries, it appears that the cross was something akin to an oath, in other words, it confirmed that the person signing was honest and telling the truth, because Christ crucified is the truth and is entirely opposed to falsehood and injustice.

– Naturally, the crosses may have had another meaning. 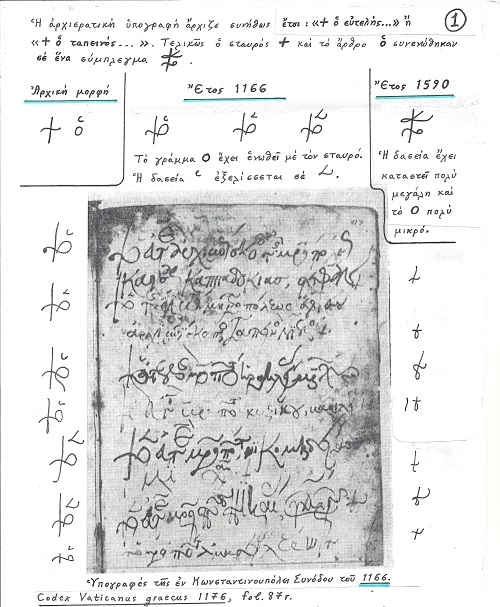 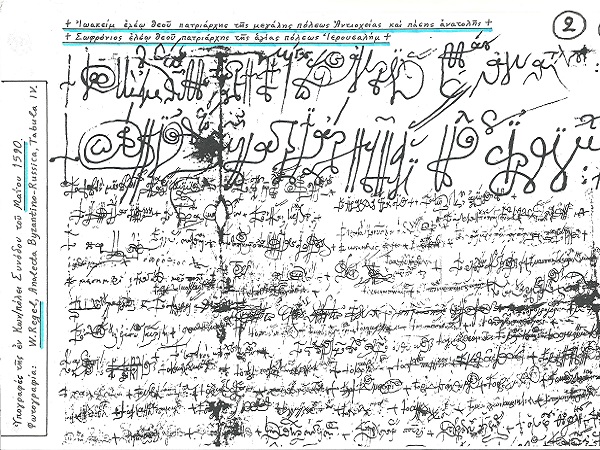 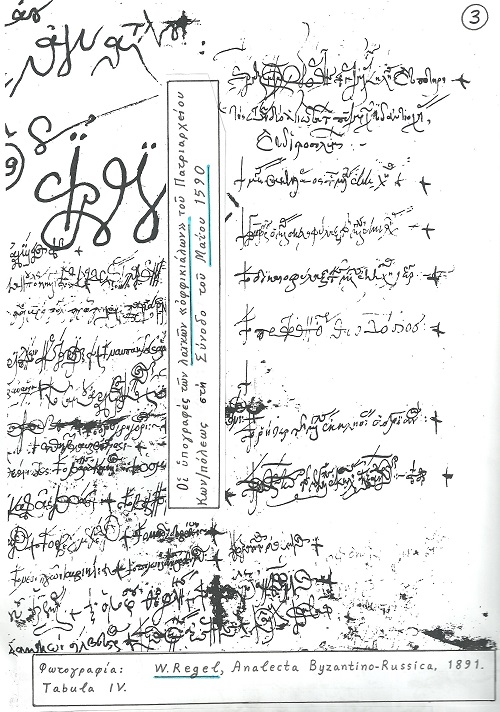