Christ brings a new ethos into the world. To those who sought power, honour and glory, He said: ‘I didn’t come to be served but to serve. And to give my life as a ransom for people’. This is His radical message to His disciples and to all those who wish to follow Him. The effort of love is the most noble expression of the Christian ethic. It’s relevant to Christians who live in the world and to monastics who’ve left the world, even to the remote hermits. We read in the narratives about the saints how persons of repute renounced the world and became ‘innkeepers’, welcoming the poor on a daily basis and feeding them from the wealth they’d acquired from their worldly career. We’re all called upon to offer the effort of our love. Because God is love and those who dwell in love, dwell in God. Service is riches for the heart, the sweetest fruit of love for God and for our neighbour. It’s the activation of the affection that wells up from the soul and flows out to everyone, because service isn’t offered merely to friends and relatives, but to neighbours as well. 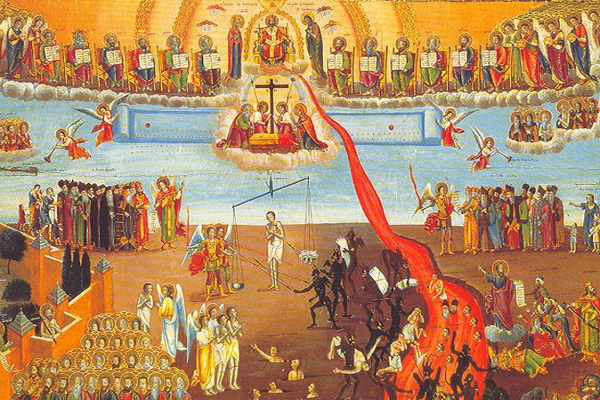 Let us recall here two of the Lord’s parables. One is the parable of the Judgement. At the final Judgment, the Second Coming, the Son of God, like a shepherd, will separate people into sheep and goats. To those whose portion is that of the evil one, He’ll say: ‘I was hungry and you didn’t give me anything to eat; I was thirsty and you didn’t give me anything to drink; I was a stranger and you didn’t look after me, naked and you didn’t clothe me, sick and in prison and you didn’t come and visit me’. Then they’ll say: ‘Lord, when did we see You?’ And He’ll answer: ‘I assure sure, since you didn’t do this for the least of my brothers and sisters, you didn’t do it to me’. We need to pay attention to this. These are people who’re convinced, as many are today, that they haven’t done any harm, that they haven’t hurt anyone. Many of them will have led quiet lives, quite happy with the large or small amount of money they have, with their domestic arrangements, with their own people. But is this enough? Not only is it not enough, but, according to the parable it’s tantamount to disdain for Christ Himself, a lack of charity, a disconnection from the blessing of God.

The second parable is that of the foolish rich man. He’s the one who built larger storehouses for his bumper harvest and said to his soul: ‘Soul, you’re set up now for many a long year. Relax, eat drink and be merry’. We should take note that in this case, the man’s wealth appears not to be the result of injustice or theft. The foolish man was a large landowner and the land had yielded a larger than normal harvest, which he had to store in his new buildings. Where was the harm or unfairness in that? In fact, according to the Jewish thinking which was current at that time, such riches were a blessing from God. But that’s not exactly how things were. God sent an angel to the foolish man and told him: ‘Today the demons will require your soul of you. And who will now be the owner of everything you’ve prepared?’

The Fathers of the Church are quite clear on this: any excess is the result of theft from those who are in real need. Strange as it may seem, even those who have simply garnered what’s their own, who haven’t seized things directly, are nevertheless depriving others indirectly, since excess in one place produces a dearth in another, because of the unequal distribution of goods. Saint John Chrysostom says that there’s very little difference between a thief and an avaricious person; it’s just that the thief steals by night and the profiteer by day. In other words, the thief steals illegally, while the profiteer steals legally. This is why Saint Anastasios the Sinaite condemns not only those who become rich through injustice, but also those who could save someone from hunger, debt or imprisonment yet fail to do so.