The Holy Spirit and the Mystery of the wine and oil

The Holy Spirit is very zealous in these End Times to bring out of His manifold divine stores His manifold redemptive gift to every part of earth. He divided the earth for the apostles and sent them to it so that every land would bear its own fruit as God has appointed for those who dwell in it so that they would establish His Kingdom in it -on earth as it is heaven. He is the One who works in the saints from generation to generation, transforming them into the same image (2Corinthians 3: 18), the image of Christ, so that the manifold grace of God (1Peter 4: 10) may be seen in them. 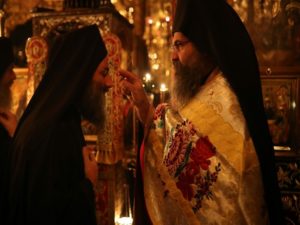 O’ Mother, you intercede on behalf of each generation so that they would receive life and come out of the sphere of death, the sphere of the ruler of this world. Your intercessions before your son and your God throughout the generations opens a way in the heavens from which the reviving rain of the Spirit will come down.

Your intercessions in this generation made the Holy Spirit come to us, visit us, and revive us. You watched in order to gather us together so that we may be kept in the upward call of God (Philippians 3: 14) until the generation of the End Times.

The Holy Spirit has stored for this generation things which ‘eye has not seen, nor ear heard, nor have entered into the heart of man; the things which God has prepared (1Corinthians 2: 9). He is filled with the fire of zealousness for the pouring of the End Times to rebuild the old ruins and renew the face of the whole earth.

The Holy Spirit has appointed for this calling to re-dig the wells of the manifold grace and be open to His inheritance in the saints (Ephesians 1: 18), His manifold inheritance for the whole earth, so that the Church may restore her manifold grace which was poured at the beginning on the Apostles of Christ. Also, so that the Church may restore her unity as one holy universal and Apostolic Church, that is, she includes all the manifold graces that have been given to the apostles.

Since the day of Pentecost, the Holy Spirit has sent forth the apostles with His redemptive gift which when Christ ascended, after completing redemption, has sent to be poured on His Church, represented in the Apostles, to gather the whole earth for the proclamation of His Kingdom, for ‘the earth is the Lord’s, and all its fullness, the world and those who dwell therein’ (Psalm 24: 1). 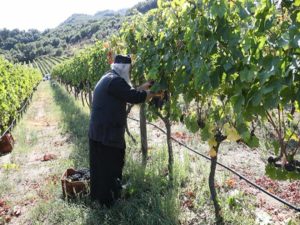 The manifold grace which has filled you, O’ Mother, brought forth your manifold icons where each icon has its own mystery and special work.

O’ Mother you are the faithful intercessor on His manifold grace which you have been filled with beforehand. The Holy Spirit has established you as a faithful queen to trade with these graces and to pass them on to the children of the Spirit throughout all the generations. Because of this all the generations call you blessed (Luke 1: 48). You do not trade for your own sake or to achieve anything for yourself. You knew how to come out of the sphere of the self since you were a child in order to live for Him, according to the purpose of His will. Thus, He joined you to Him and made you enter His temple so that the Holy Spirit may work in you and fill you with His grace. The Holy Spirit filled your soul, spirit, and body. According to the prayers of the Church, this is the icon of the one full of grace. Your icons are manifold in accordance with the manifold grace that was poured in you and which has rested in you.

Every monastery, or the mountain as a whole, has a heavenly altar in which is stored the worship which the Holy Spirit has made in the saints which has the mystery of the wine and oil. This is in the heavens of every place where God has established monasteries according to His will and they became like stores above. In the End Times, the Holy Spirit will open the windows of heaven, that is, He will open these stores with the fullness of grace which He has made in His saints as early rain and also His special pouring in the End Times as later rain. Both the early rain and the later rain together will cause the great change and transformation in the life of those waiting for these showers of rain.