The dogmatic boundaries of the Church

God’s love knows no bounds, it’s without limits. As Saint Gregory of Nyssa puts it in his Dialogue on the soul and resurrection, the divine life is activated through love and God’s agapetic. Energy has no boundaries. The creation of the universe and, in particular, the human race, is an expression of God’s boundless love, as is the whole history of His dispensation, with its culmination in the incarnation of the Son and Word of God: ‘For God so loved the world that he gave his only-begotten son so that all who believe in him should not perish, but have eternal life (Jn. 3, 16).

In imitation of the Triune God and His dispensation, the love of the Church knows no limits, either. It’s directed to all and receives all without distinction: Jews and Greeks, slaves and free, men and women (Gal. 3, 28). No distinction of any kind- racial, national or social- has a place in the life of the Church, because all people are created in the image and likeness of God and are therefore of equal value to everyone else and are destined, if they so desire, to become sharers in the divine nature (2 Peter 1, 4). This is why the Church always prays for all people and for the whole world. The whole of its liturgical life is a constant prayer for the whole world, and the private prayer of each individual believer should be the same. 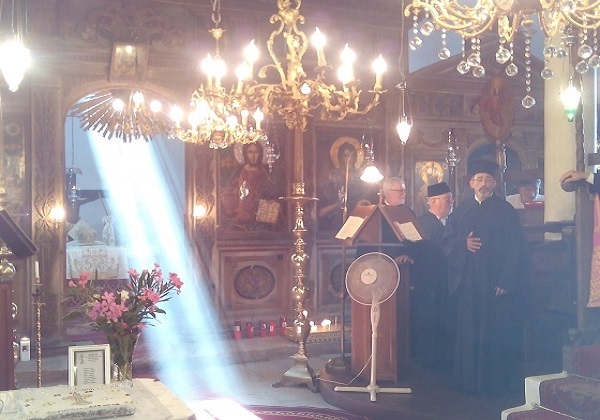 A particular manifestation of the unlimited love of the Church is the love of its saints. As expressed principally in their prayers for the whole world, the love of the saints really does acquire cosmic dimensions. In the heart of saints at prayer ‘are gathered the sufferings of the whole world’ and, with a sorrowful heart, they pray for all people and all things. Their love envelopes the whole of creation and then ‘they grieve with all those who have been deprived of God’s glory’. Their repentance ‘proves to be repentance on behalf of the whole world, the whole of humankind’ (Elder Sophrony, On Prayer). The great ascetics in the desert even dared to pray for the demons. This is love which transcends every limitation and becomes infinite, as is the love of God, love which, between personal salvation and the salvation of other people, prefers the latter. The words of Saint Paul are very moving: ‘For I could wish that I myself were accursed and cut off from Christ for the sake of my own people, my kindred according to the flesh’ (Rom. 9, 3). As, indeed, are those of Moses after the Israelites had constructed the golden calf and had begun worshipping it: ‘But now, if you will, forgive their sin; and if not, blot me out of the book that you have written’ (Ex. 32, 32).

But while the love of the Church knows no limitation and no boundary, faith is specific. It’s belief in God in the Trinity and His universal dispensation; the faith in Jesus Christ as God and human and His incarnation; the faith in Holy Spirit, ‘the Lord, the Giver of Life’; the faith in the one, holy, catholic and apostolic Church; the faith in the resurrection of the dead and ‘life in the age to come’. Christian truth cannot be understood as an abstract concept, but as incarnate in the reality of this world.

The truth is the incarnate Son and Word of God, Who revealed God the Father to us and sent the Holy Spirit. The truth is the Triune God, the Lord and Creator of the world and of history. The mystery of the Triune God is beyond comprehension and access, but has been revealed to us through the incarnation of the Second Person of the Holy Trinity, through the mission and teaching, the crucifixion, resurrection and ascension of Jesus Christ. It is preserved unaltered in the Holy Spirit, in the faith and life of the Orthodox Church. According to the words of Saint John, the Apostle and Evangelist: ‘No one has ever seen God. The only Son who is in the bosom of the Father has made him known’ (John 1, 18). In this way, God isn’t perceived by Christians as the abstract Absolute of the philosophers, but as the Triune God of the Revelation: ‘Long ago God spoke to our ancestors in many and various ways by the prophets, but in these last days he has spoken to us by a son (Heb. 1, 1-2).

Knowledge of God isn’t the result of a rational process, but rather it’s personal communion with Him. This is possible only within the context of the faith and life of the Church. According to Biblical and Patristic Tradition, God can’t be conceived through reason, but is revealed and speaks ‘to Moses face to face, as one speaks to a friend’ (Ex. 33, 12). According to Saint Symeon the New Theologian: ‘God reveals Himself to us to the extent that He wishes to be known by us. And insofar as He’s revealed, He’s seen and known by those who are worthy’.