The Seven Times Christ Spoke on the Cross

You want to know the meaning of those seven phrases uttered by Christ on the cross. Aren’t they clear?

The first one: ‘Father, forgive them. They don’t know what they’re doing’. (Luke 23, 34). With these words, Christ showed His mercy to His executioners, whose malice didn’t abate even when He was suffering on the cross. Besides this, the words He cried aloud from the top of the rock of Golgotha represent a proven but never well-understood truth: that those who do evil never know what they’re doing. By killing the Righteous One, in reality they’re killing themselves and, at the same time, are actually glorifying Him. As they’re trampling all over God’s law, they don’t see the millstone which is descending invisibly and will crush them. As they’re mocking God, they don’t see that their faces have become transformed into the snouts of wild beasts. Imbued as they are with evil, they never know what they’re doing. 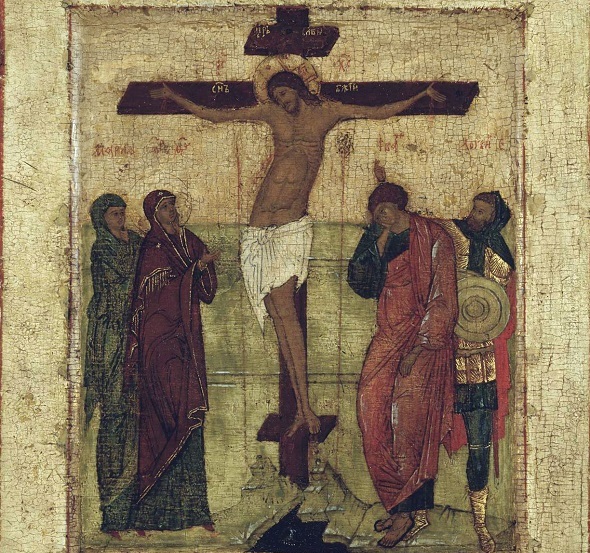 The second phrase- ‘Truly, I say to you, today you’ll be with me in paradise’ (Luke 23, 43) – was addressed to the robber who repented on the cross. A very consoling phrase for sinners who, even at the last moment, repent. God’s mercy is indescribably great. The Lord was fulfilling His mission even on the Cross. To His last breath, the Lord was saving those who indicated even the slightest desire to be saved.

The third phrase was: ‘Woman, behold your son’(Jn.19, 26). Christ was speaking to His Holy Mother, who was standing at the foot of the cross, also being crucified in her heart. To Saint John the Apostle He said: ‘Behold, your mother’. This demonstrates the concern which everyone owes to their parents. You see, He Who gave people the commandment ‘Honour your father and mother’ (Ex. 20, 12), was fulfilling it in His very last moments.

The third phrase was: ‘God, my God, why have you forsaken me?’ (Matth. 27, 46). These words show both the strength of human nature and the Lord’s foreknowledge. As a man, He was suffering, but underneath human pain there’s a mystery. You see, only these words would be able to dispel the heresy which was later to shake the Church and which stated that the divine nature suffered on the cross. But the eternal Son of God became incarnate as a man so that He could be a human person in body and soul, so that, when the time came, He’d be able to suffer for people and to die on their behalf. Because, if the divine nature of Christ had suffered on the cross, this would mean that His divine nature would have died. And that’s something we shouldn’t even contemplate. Ponder as deeply as you can on these great and terrible words: ‘God, my God, why have you forsaken me?’.

The fifth phrase: ‘I’m thirsty’ (Jn. 19, 28). His blood was flowing. This is why He was thirsty. The sun was beginning to set and struck Him full in the face, so, together with all the other torments, He was burning up. Naturally, He was thirsty. But, Lord, were you really thirsty for water, or for love? Were you thirsty as a human being or as God, or both? The Roman centurion gave you a sponge soaked in vinegar. A drop of mercy such as you hadn’t experienced from other people for the whole of the three hours on the cross. To some extent, this Roman soldier relieved the sin of Pilate- the sin of the Roman empire- towards Christ, even if it was with vinegar. This is why, Lord, you would eradicate the Roman empire, but would found another.

The sixth phrase is ‘Father, into your hands I commend my spirit’ (Luke 23, 46). He said this to show that He came from the Father, not of His own volition, as the Jews accused Him. But these words were also said so that they’d be heard by the Buddhists, the Pythagorans, the apocryphers and all those other philosophers who babble on about the transmigration of the souls of dead people into other people, animals, plants, stars or metallic elements. Get rid of all these fantasies and see where the soul of the dead Righteous One is headed: ‘Father, into your hands I commend my spirit’.

The seventh phrase is ‘It is finished’ (Jn. 19, 30). This doesn’t mean that life is ended. No! It means that His mission, which was concentrated on the salvation of the human race, had ended. The divine task of our sole, true Messiah had been completed and was sealed with His blood and earthly death. The torments were over, but life was just beginning. The tragedy was finished, but not the drama. Next to come was the majestic achievement: victory over death; resurrection; glory.