It has been announced that today, 27 November 2017, the Holy and Sacred Synod of the Ecumenical Patriarchate has canonized the late Elder Iakovos Tsalikis.

The petition for his canonization was submitted by the Holy Metropolis of Khalkida and 22 November has been appointed as his feast day. Father IakovosTsalikis was born on 5/11/1920 in Levisi, Asia Minor, opposite Rhodes and a few miles inland from the coast. His parents were Stavros Tsalikis, a construction worker by trade and his mother was called Theodora. 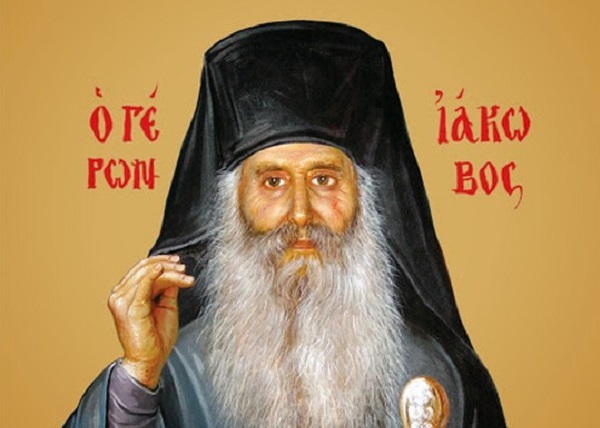 In 1922, following the Asia Minor catastrophe, the Greeks living there were expelled by the Turks and Fr. Iakovos’ family was broken up. His father was held prisoner in Asia Minor, while his mother and grandmother, together with the three young children George, aged 4, Tasoula,3, and Iakovos, 2 moved to Greece. Having landed at the port of Piraeus, they went on to settle in the village of Saint George, in Amfissa, as refugees.

The family came together again, fortuitously, at the end of 1925, when they moved to the village of Farakla, on Evia, not far from Prokopi and Saint Ann’s.

In 1933, Iakovos left the primary school in Farakla with excellent marks, but was unable to continue his studies because his family lacked the means to enable him to do so. He therefore followed his father into construction work. From an early age he stood out as being particularly devout, and also very loving towards other people, old and young. From an early age, he read Church books, the lives of the saints and he also learned by heart readings from the psalms, the services, the dismissal hymns and kontakia. For this reason old and young, friends and family, used to call him ‘the little monk’ from when he was no more than seven years old. At ten, he became ‘Father Iakovos’.

At the age of nine, he was in the chapel of the village of Saint Paraskevi and saw a nun, who spoke to him and told him, among many other things, that she was Saint Paraskevi. He spent more time on spiritual matters (liturgies and services) than he did on learning his trade. The main features of his life were prayer, fasting and vigils.

In 1947, he was called up for the army, where he served in ordinance and transport for more than two years. While he was doing his military service, and even more particularly when he’d finished, his mind was on services, liturgies, vespers, vigils, and supplicatory canons, all of which he attended.

From childhood he’d had a strong inclination towards all things connected to God, but the call from above came later. It was in November 1951 that he entered the Holy Monastery of Saint David the Elder, close by the town of Limni on Evia, with the intention of becoming a monk. But the spiritual state of the monastery and the conditions there in general were disappointing. For this reason he left the monastery soon afterwards and returned to his home in the village.

On 17/7/1952, however, he returned to the monastery, determined to live there and serve as a monk of the Lord, whatever the difficulties and conditions. This was the most important and critical decision of his life.

He was an effective steward of the monastery and, in 1975, he was elected Abbot, a position which he retained until his demise on 22/11/1991.

When he served, he really did feel the presence of the Lord. If he wasn’t serving himself, he would spend the Divine Liturgy kneeling before the icon of the Lord on the iconostas.

But what characterized his whole life were his firm and unshakeable belief in the Triune God in one essence; his absolute dedication to his spiritual duties; his strict asceticism, fasting, vigils, prayer; as well as his great love and material and moral support for people who were undergoing trials. And also his patience in temptations, trials, illnesses and sorrows.

He suffered five serious illnesses, yet never complained or felt frustrated. All the time he said: ‘Thank God for everything’* and ‘The Lord God lives’.

His three fundamental beliefs were:

a) that there is a God Who is triune, one in essence, almighty, the creator of all things, and that He is Himself wholly love.
b) that there is life for the soul after death and it begins with burial.
c) that the way we live here (our actions) determines the conditions of our life after death.

The life of the Elder was also characterized by his great love and support for people who were being tested. From all over Greece they flocked in their hundreds to the Holy Monastery of Saint David and the Elder would listen to them, advise them and help them. He experienced their trials with them and eased their pain.

This is why, on 21/11/1991, when he departed this life to go to the Lord, and the funeral service was being performed, thousands of people who had benefited spiritually and materially from him, clergy and laity, all shouted as one: ‘Holy, holy, holy’, three words which reflected the reality of his life here on earth.

May his memory be eternal and may we have his blessing. Amen.