Encomium on the two Great Archangels Michael and Gabriel – 1

If, my beloved fathers and brethren, I were granted the gift of acquiring one of the tongues which the angels have, as the Apostle of Christ Paul says, (“even if I speak in the tongues of the Angels”) it would be certain and only to be expected that I would be able to praise Michael and Gabriel, the Archangels of the Lord, in a manner befitting them, since it is natural that one thing can be praised and presented to others by something similar to it. Had I but one of those fiery and immaterial tongues which were given to the holy and divine Apostles, I would be able to speak with supernatural praise, as is their due, of the fiery and immaterial Chief Captains. 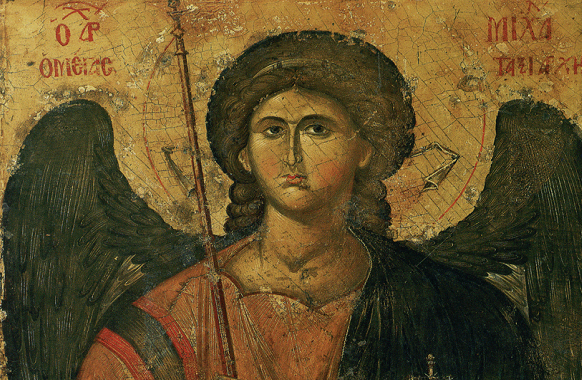 If, even for a short time- I had purified my tongue, as Isaiah did, with the coal from the Seraphim,  there would be some hope that I might say something worthy of the Commanders. But since I do not possess any of these qualities and I do not have an angelic tongue, but a human one; not fiery, but earthly; not immaterial. but material; not pure but impure, and apart from all that, not rhetorical or methodical, but unlearned and without method; what can you expect to hear from me? Just a few, poor things about the holy Archangels.

I shall avoid examining the nature of the Archangels: when they were created, how and where, and in what way they think and perceive, how they move from one place to another and their other angelic features, concerning which the theologians teach, especially Dionysios the Areopagite. Instead, I shall show in this encomium only that divine Michael and holy Gabriel were particular servants of the exceptional energies and works of Almighty God, and take care that you understand.

According to the theologians, there are two main energies and particular features and characteristics of our Holy God: one is justice [righteousness], which is also called apportionment or judgement; the other is goodness, which is also called kindness, compassion, and mercy, concerning which David says: “Lord, I shall hymn your compassion and justice before you” (Ps. 100, 1). With justice, God judges people and disciplines them when they sin and do not observe His commandments. And, through His goodness, He shows mercy and compassion to them.

The Archangel Michael is the Angel of God’s justice, because we see him as the servant who chastens and reforms bad people, while also guarding and defending the good. This is apparent from a number of parts of Scripture, especially the death Michael dealt to the first-born of the Egyptians and the protection he gave to the first-born of the Jews.

The Archangel Gabriel, seems to be the Angel of God’s goodness and compassion, since he is the one we see as the servant who shows people God’s great mercy and compassion This can be seen in many instances, especially the joyful tidings Gabriel brought to the world concerning the great mercy of Christ’s coming into the world.

God first created the spiritual world; He brought it out of non-existence into existence. He adorned it with three triads of hierarchies: Thrones, Cherubim and Seraphim; Dominions, Powers and Authorities; Principalities, Archangels and Angels. Above these nine orders, He placed  the first princes and teachers, Michael and Gabriel. Listen to how and in what way.

Because Michael remained a most grateful servant of the Almighty God, he carried out spiritual warfare in heaven against the renegade Devil and his angels, when they puffed themselves up against the true God. Michael cast them into the nethermost part of the Earth. As the Revelation says: “Then war broke out in heaven. Michael and his angels fought against the dragon, and the dragon and his angels fought back… and the great dragon was hurled down- that ancient serpent called the devil, or Satan, who leads the whole world astray. He was hurled to the earth, and his angels with him (Rev.12, 7-9). Because of his great achievement, he was appointed  first among the nine orders of Angels and he taught them to display gratitude, obedience and humility towards God and to be always indivisibly united with Him.

Saint John Chrysostom tells us that to Gabriel alone was the mystery of the incarnate dispensation entrusted, as do the hymnographers of the Annunciation: “only to you do I entrust the Mystery”. He became God’s primary and most important servant, from the beginning to the end. He was appointed first prince and teacher of all the orders of Angels, even of the supreme Cherubim and Seraphim, and taught them all the hidden words and knowledge which are concealed in the depths of this mystery.

And even if Saint Paul says that it was His intention that “through the church, the manifold wisdom of God should be made known to the Principalities and Authorities in the heavenly realms”, this should be interpreted as occurring though the mediation of Gabriel. According to Gregory of Nyssa, this manifold wisdom of God is that He will defeat opposites with opposites, i.e. pride with humility, glory with dishonour, strength with weakness, wisdom with foolishness. Gabriel learned this manifold wisdom from the incarnate Word Himself and from the Holy Spirit, Who is with Him, and so he passed it on to all the orders of the Angels, without stinting, as in the words of the Wisdom of Solomon: “I learned without guile and bestow ungrudgingly” (cf. 7, 13).

That Gabriel is the first among the nine order of Angels is clear also from the following: it is the common view of the Church, and, indeed, of Abba Isaak, that all the ranks of Angels receive all illumination from Christ, Who, according to Saint Paul, is above every principality, authority and power and every name in the coming age (cf. Phil. 2, 9-11). By the same token, we know that it is from the Mother of God, who is incomparably superior to the Seraphim, that the Angels have their illumination, as Gregory of Thessaloniki [Palamas] says, in his first discourse on the Entry and in his discourse on the Dormition.

Since no-one is closer to Christ and the Mother of God than Gabriel, it may be concluded that it is through him that all the ranks of the Angels are illumined. Even though Saint Dionysios [the Areopagite] says that the first order are the Thrones and the Archangels the eighth, this refers to the time before the incarnation. Because thereafter, the order was reversed, according to Saint Isaak and the first became last and the last first.