Today’s Gospel reading of the young rich man presents us with a challenge. Christ’s words give us pause for thought: they seem so harsh because He asks him to overcome a powerful worldly addiction. ‘Sell everything you have and give to the poor…and come and follow me’.

The quest for riches is a normal goal for many people. They claim it’s the foundation of their well-being. While this is relative, we certainly can’t conceive of life without money, since it’s the means we use to meet our basic human needs. But money, like so many other things and values in our daily lives, is doubled-edged, ambiguous and equivocal. It has a positive and a negative significance, depending on our attitude towards it. The same thing can be a curse for one person and a blessing for another; for one a source of salvation and for another the cause of their downfall. Money’s good when it improves our lives and becomes a means of relief for those in need. It can, however, become an overriding passion, a ruthless and inextinguishable desire which tyrannizes us. 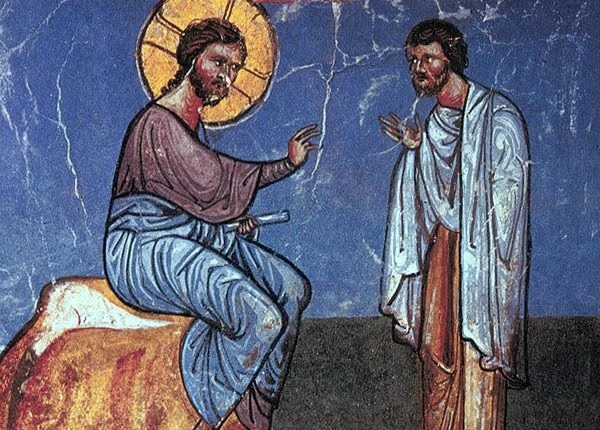 The attitude and behaviour of the young rich man confirms this. Money held him bound fast to the earth, despite his somewhat good intentions and spiritual sensitivities. At the critical juncture, however, he had to choose between God and his dependence on the world. Christ’s demand was absolute. He sought something over and above our expected, formal duty. He wanted transcendence, perfection, inner freedom, self-denial and sacrifice, in order to test the authenticity of the man’s faith. Or rather, for him to feel for himself his weakness and his ‘addiction’, because Christ already knew it. But the young man couldn’t extricate himself from the clutches of wealth. ‘He grew fat, he became thick and broad; then he forsook God’ (Deut. 32, 15). And then his self-deception and illusions caved in, because he realized that his faith was superficial. And this was because it didn’t cover the whole of his life nor the depth of his existence. The centre of his existence and his life was his own ego, not God, as he thought was the case. In place of God he’d set up something created- riches- and so, in worshipping this he was actually worshipping himself. This is why he couldn’t give away his wealth, because it would have been like parting with his own self.

The passion for becoming rich

The passionate desire for the acquisition and possession of ever more material goods knows no dividing lines or boundaries between religious people and those who are indifferent. It’s a passion, and, as such, affects everyone, since it’s a symptom of our common nature, which has fallen into sin. This drive that possesses people to become rich is a sign not only of excessive egotism, but also of feelings of insecurity, uncertainty and fear. People claim that the future’s unknown, life is unpredictable and our existence is fleeting and fragile. Since this is how things are, worldly goods seem to be the only support that offers certainty and security. They’re the priorities in life so it’s worth making sure we have them, for our own good. Naturally, this is an erroneous impression and a mistaken direction for our lives. Christ tells us quite clearly that our dependence on money is idolatry, which directs our steps, subjugates us and, in the end, tyrannizes us.

Christ’s words and grace don’t judge and don’t condemn any one thing or another. What we’ve said and understood here is simply a way of helping and being helped. The Gospel shows us perfection, which lies in the transcendence of worldly goods and all such things. It seems like an unrealistic, idealistic goal. But we’re called upon to humble ourselves, to live balanced lives and to give worldly goods and such like no more than their due merit. We have to discover the absolute value of our life, God, and also other people, who come from Him and end up with Him. Amen.