The Geography of Heaven and Hell

A timely reprint – for thinking about heaven and hell. I continue to be amazed at the literalism that infects the minds of many Christians. Just because Scripture uses the language of geography to describe something does not at all mean that we should assume that it is referring to a literal geography. Those whose imaginations are filled with various versions of heaven and hell in literal terms – it seems to me – lack imagination. The accounts of Christ after the Resurrection, though marked occasionally with very physical descriptions, are clearly marked as well with things that defy everything we know of physicality. 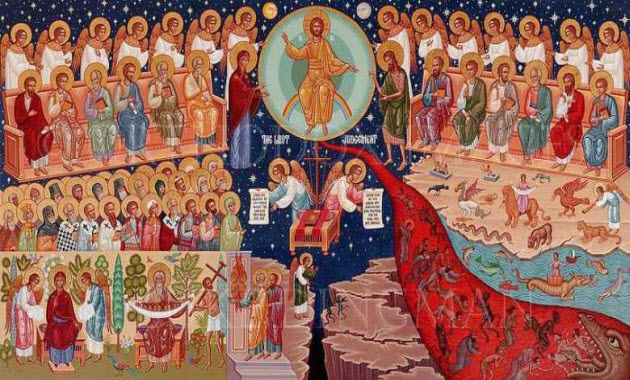 His Resurrection is the only “image” of a tangible/non-tangible sort that we can point to for the character of life after death. Some Christians so lack imagination that they won’t let Christ off a literal throne in heaven and use such nonsense to deny the complete reality of the transformation of the Eucharist into His body and blood. In earlier centuries of the Church, such notions would (and were ) declared heresy by the Fathers. How can we worship God in awe and wonder when He is reduced to such understandable terms?Jesus Christ is Lord and His resurrected existence is the only measuring stick (if you will) of reality.

The parable of the Rich Man and Lazarus (Luke 16:19-31) has a long history of teasing Christians into dangerous territory. I suspect that many if not most Christians have more than a little curiosity about life after death. We want to know what happens. We want to know “how things work.” And this parable – at least on its surface – seems to give more indication of “how things work” than almost any other passage in Scripture.

It gives us a geography of sorts: Lazarus is in “Abraham’s bosom” apparently enjoying good things; the rich man is in Hades and in torment; we are told that there is a “great gulf fixed between the two” so that no one can come from Hades to Abraham’s bosom and no one from Abraham’s bosom can go to Hades.

It interests me that many Christians use this parable as a “map” of the after-life, or at least as a story that supports their own “map” of life after death.

It would seem that the reason some Christians like this is that it fits their own map of God and life after death. There are those who seem to like things to be stableand unchangeable – by this I mean they want a life after death (and a life before death) with clearly defined rules, boundaries, unbending laws and the like.

In such a map of things – those who obey the rules, observe the boundaries and master the laws do well. Those who do not – are punished. Such a world, it seems to them, is the way things ought to be, and to be the best way to either reward the good, correct the bad, or punish the incorrigible.

I might add that if you want a world like this – then it is even better if you can find a way to secure God as its underwriter. Many people do this under the heading of the “justice of God.” They will say that “God is just and He cannot deny His justice,” thus forcing God to have very clear rules and guaranteeing that He cannot break His own rules.

1. There are no maps of the afterlife. Regardless of the descriptions in this parable – the purpose of the parable is not to teach us the topography of heaven and hell. Where, I will ask, is Abraham’s Bosom? How do we think of this as a place? Hades has the same problem – where do you place it? As for the Great Gulf – of what does the gulf consist? What sort of obstacle is insurmountable in these circumstances?

The point of the parable is found in its end: “If they have not listened to Moses and the Prophets, neither would they listen to someone even if he came back from the dead.” It is not a parable about the topography of the after-life, but a comment about our present life and our unwillingness to hear the gospel.

2. There are no rules which God must not break. Important, and please note carefully: no matter how much some may want the world – particularly God’s world –  to be describable in clearly defined rules, boundaries and unbending laws – it’s just not the case. If there is a “rule” of any sort – it is God Himself – it is Personal – and is defined only by mercy, love and kindness.

If we have the eyes to see – we are already traveling the roads of heaven and hell – already dwelling in the bosom of Abraham or in the torments of Hades. The geography of that journey is the geography of love and mercy, kindness and forgiveness – or contrary – hatred and judgment, violence self-conceit, slander and calumny.

Judge for yourself – for we’ve all experienced both. Where do you want to dwell? The good news is that whatever gulf is fixed in our heart – whatever wall or chasm has been erected within us – Christ has gone there. He descended into Hades. If you will look within yourself – into the darkness of your own private hell – you will find Christ there – for He has gone there to look for you. And as sure as He trampled down death by death – He can trample down your own hell and translate you into the Kingdom of light.