When Emperor Basil I ascended the throne, in 867, major changes occurred in both the political and ecclesiastical spheres. He had murdered both Vardas and Emperor Michael III in order to achieve his goal. Wishing to appease the Pope and curry favour among the supporters of [the previous Patriarch] Ignatios, who were strong in the East, he dethroned Fotios, who was confined to the Monastery of the Protecting Veil, on the Bosphorus, with Ignatios being restored to the throne on 23 November 867. 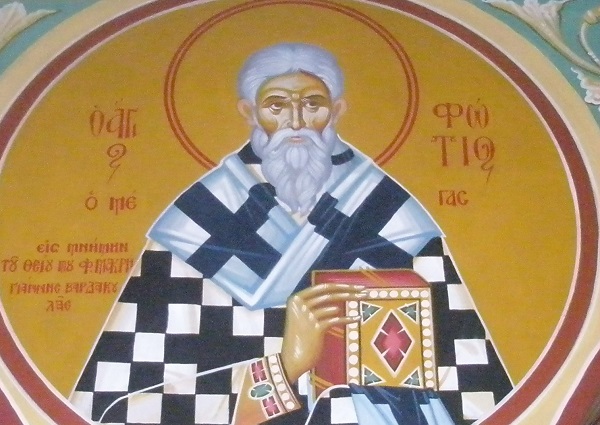 By then, the Pope was Hadrian II, being the successor to Nicholas, who died in 867. Despite these developments, Hadrian wanted a new synod to be called in Constantinople which would confirm the condemnation of Fotios. Considered in the West to be the 8th Ecumenical Synod, this body did, indeed, meet in 869-70 and reversed the decisions of 867. Fotios was anathematized, any bishops ordained by him and loyal to him were defrocked and any monks and lay people who remained his loyal supporters were excommunicated. The emperor later realized his mistake, however, and recalled Fotios from exile, entrusting him with the education of the royal children. On his return to Constantinople, he and Ignatios were reconciled and when Ignatios died in 877, it was a foregone conclusion that Fotios should once again become Patriarch.

Fotios ascended the Patriarchal throne three days after the death of Ignatios. One of his main concerns was to restore his reputation after the slanders against him at the Synod of 869-70. To this end, he called a great synod in Constantinople and invited the other Patriarchs to send envoys. In the meantime, Hadrian II had died (872) and was succeeded by John VIII (872-882), who accepted the annulment of the decisions made against Fotios by the Papophile synod and did, indeed, send envoys. The 8th Ecumenical Synod which met in Constantinople, in 879-880, acknowledged the canonical legitimacy of Fotios’ first election. In 886, Vasileios I died and was succeeded by Leo VI, the Wise, who, though he had been Fotios’ student, had never liked him. Fotios was once again dethroned, this time for good.

Fotios withdrew to the Monastery of the Armenians in Constantinople and continued his beloved writing activities until his death on 6 February, 891 or 893. His feast is celebrated on 6th February, the Church having canonized him for his services to the Eastern Church, the spread of Orthodoxy and his defence of proper dogma and traditional customs. His written oeuvre is enormous and includes literary appreciation (Myriobiblos or Bibliotheca and the Lexicon), theological compositions (Amphilochia, Nomocanon, Against the Manichaeans, and On the Mystagogy of the Holy Spirit) as well as some 263 Epistles. Apart from theology and literature, his interest was also attracted to political theory and practice. He therefore wrote a tract entitled Prince, which was addressed to the ‘ruler’ (archon), of Bulgaria, (Khan, Knyaz or Tsar) Boris-Michael.

The Patriarchate of Fotios is associated with the Christianization of the Slavs. The fruit of his efforts was the baptism of the Bulgarian prince Boris, who took the Christian name Michael. In May 861, the wise prelate sent an exhortatory letter to Tsar Michael to instruct him in the Christian faith. As was the case with all the exhortatory treatises, especially those of a catechetical nature, the work has a prologue and epilogue and is then divided into two parts, the theoretical and the practical, or the theological and the moral.