According to Saint Basil, there are three things which incline us towards doing good, as I’ve mentioned to you before. We may do so because we fear damnation, in which case we’re in the position of a servant. Perhaps we wish to gain a reward, which puts us in the position of a paid employee. Or we do it for the sake of the good itself, and so we’re in the position of a son. A son doesn’t do his father’s will out of fear, nor to get anything for himself out of doing so, but in order to serve him, to honour and please him. And this is how we, too, should be generous in our alms-giving, for the sake of the virtue itself, sharing in the sufferings of others as though the latter were members of our own body. Serving them as if we ourselves were being served. Giving as though we ourselves were receiving. This is charity which is given consciously and which puts us in the position of the son that we mentioned before. 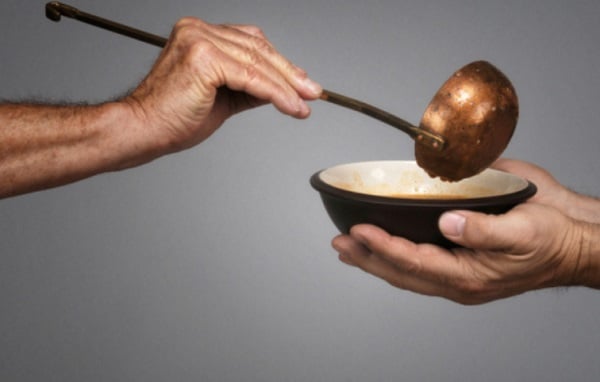 You can’t say: ‘I’m poor and I’ve got nothing to give’. Even if you can’t give like the rich who put their gifts in the box for offerings [Mk. 12, 41; Luke. 21, 3], you can still put in something small, like the impoverished widow. If you do, God will receive it more gladly than the gifts of the rich. And if you’ve got nothing at all, you’ve still got bodily strength and so you can still serve a fellow human being. If you haven’t even got that, comfort them with your words and listen to him who said: ‘A word is better than a gift’ [Sirach 18, 16]. Let’s suppose that you’re not able to comfort someone with words, and another person gets angry with you. Bear with them in their distress, since you can see that they’re being troubled by our common enemy, the devil. Instead of saying something that’s only going to add to their distress, keep silent and have mercy on their soul, wresting it from the enemy. Or again, if somebody sins against you, you can have mercy on them by forgiving them their sin, so that you, too, can receive forgiveness from God. As in: ‘Forgive and you will be forgiven’ [Luke 6, 37]. You’ll then be in a position to be merciful to the soul of the other person by forgiving them the sin they committed against you. Because God has given us the authority, if we choose to exercise it, to forgive other people their transgressions. Even if you can’t comfort the body of someone else, you can still forgive their soul. And is there any greater charity than that which is offered to the soul? Because, just as the soul is of greater value than the body, so any charity that is offered to the soul is greater than that given to the body.

So no-one can say: ‘I can’t give charity’. We can all do so, depending on our powers and our circumstances. The only thing is that we should do so consciously, as is the case with every other virtue. This is why those who know full well what they’re doing are recognized as builders whose houses are of sound construction. The Gospel has this to say on the subject: wise people will build their houses on rock and nothing will be able be able to shake them [cf. Matth. 7, 24).

May our merciful God grant that we hear and do what we have heard [Matth. 11, 15], so that these words will not condemn us on the day of judgement. To Him be glory unto the ages. Amen.

Alms-giving can, indeed, be a chastening experience. We think we’re being generous, whereas, in fact, we’re the ones who are being blessed.

A couple of years ago, I left home to go to church and forgot to take any money with me. As I went out after the service, there was a woman begging by the steps. I apologized, said that I had nothing on me and told her, jokingly, that I wouldn’t even be able to get myself a cup of coffee. She immediately started rummaging around in the coins she’d collected and offered me the price of one.

And a few weeks ago, I saw my friend Angell, a beggar who has had both his legs amputated at the hip and is confined to a wheelchair, having to sit outside in all weathers. I gave him a small amount of money, but he then started speaking, in some distress. I’m not yet fluent in Bulgarian and assumed he needed more than I’d given him, so I added to the amount. The next day, I saw him again and he, a beggar in the most trying of circumstances, wanted to return the extra note, because I hadn’t understood.

On both occasions, I was, potentially, the ‘donor’, but in fact was the ‘recipient’ in terms of spiritual benefit [WJL].