In an interview with an Italian TV network, Pope Francis of Rome said recently that the current language of the Lord’s prayer ‘is not a good translation.’… The problem, as he sees it, is that the prayer asks God to ‘lead us not into temptation, but deliver us from evil’. But, says Pope Francis, it’s not the Lord Who tempts. ‘It is not He that pushes me into temptation and then sees how I fall. A father does not do this. A father quickly helps those who are provoked into Satan’s temptation’. 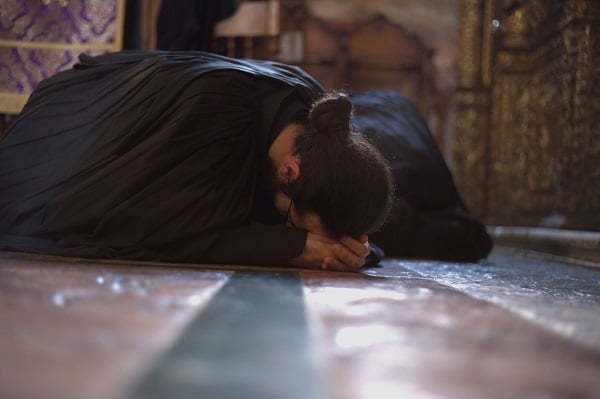 A couple of points presents themselves immediately. The first is that it’s ‘not a good translation’. The problem here is that we can’t know, since we don’t have the original text. There are a number of indications that Christ, as a Galilean particularly (‘Galilee of the Gentiles’), knew Greek, but it seems unlikely that, in the context of the transmission of the Lord’s Prayer (Matthew, 6, 9-13; Luke 11, 1-4), He would have spoken in that language. At His trial before Pilate, however, He probably did do so, since both He and Pilate would have had Greek as a common language. Until recently, it was assumed that the Lord would have spoken in Aramaic, but there is now a growing body of opinion that Hebrew was more widely used than previously thought at the time of Christ. It’s therefore impossible to know exactly what the Lord said.

If the Gospel of Saint Matthew was, indeed, written by him, we should remember that, as a tax-collector he would have spoken four languages: Hebrew, Aramaic, Latin and Greek. He couldn’t have functioned otherwise. And you really don’t have to be much of a Greek scholar to realize at once that the Gospel of Saint Luke was written by someone who had had a good education in Greek. The point is that the translation as we have it was accepted by the Early Church, the members of which would have been much more confident than we can possibly be today that the Greek reflected what Christ actually said.

The second point is the acknowledgement of the role of Satan. The earliest text we have, the Greek, makes it absolutely clear that we hope to be delivered from ‘the evil one’. It’s generally understood that the word in Greek refers to a masculine person, although theoretically it could also mean a neuter entity, such as, for example, ‘spirit’. What it cannot mean is ‘evil’ in general, which would have been rendered by a feminine noun.

Having said this, however, the striking thing about the Pope’s statement is that it’s almost Protestant, in the sense that it seems to be more an individual position rather than a matter of Church dogma. Clearly he was speaking ‘off the cuff’, as it were, in a TV interview, but, as Pope, he has available to him two thousand years of Christian hermeneutics, so it really should have been easier to come up with a more authoritative answer.

One such generally recognized authority is Saint Maximos the Confessor who wrote a treatise on the meaning of the Lord’s Prayer. Regarding ‘Do not lead us into temptation’, Saint Maximos says that the words refer to those who have not completely forgiven others who have stumbled, to those who have not brought to God a heart free of grievance, who are not reconciled with their neighbour. Such people will fail to attain the grace of the blessings they’ve prayed for. In fact, they’ll be justly delivered into temptation and evil so that, once they’ve retracted their judgments of other people, they’ll learn to purify themselves of their own sins. ‘Temptation’ here, says Saint Maximos, means the law of sin, to which we were not subject when we were first created. The ‘evil one’ is Satan, who has persuaded us to transfer our soul’s desire from what is permitted to what is forbidden.

Another interpretation of ‘temptation’, he says, is our predilection for the passions of the flesh, with ‘evil’ being the way we implement these passions. God doesn’t free us from either of these if we haven’t previously forgiven our debtors. As long as we’re stubborn in this regard, He abandons us to the domination of evil, because we ourselves have deliberately chosen the shameful passions, of which the devil is the sower, in preference to our real nature, of which God is the creator. God allows us to make this choice.

Maximos goes on to say that if we really wish to be delivered from evil and not to enter into temptation, we should trust in God and forgive our debtors. ‘For if you do not forgive people their sins, your heavenly Father will not forgive you yours’ (Matthew, 6, 15). We should do this not only to receive forgiveness for our offences, but also to defeat the very law of sin itself.

Saint Maximos says that, according to Scripture, there are two kinds of temptation, one pleasurable, the other painful. The former is the result of deliberate choice, the latter is unlooked for. The first kind actually generates sin and this is the temptation which we pray we should not enter into (Matthew 26, 41). The second kind punishes sin with sufferings that we don’t expect. Saint James talks about this ‘temptation’, when he says ‘Regard it as a great joy whenever you find yourselves beset by many trials. Because the testing of your faith produces patient endurance; this endurance shapes the character; and the character thus shaped should be brought to fruition (cf. Jas. 1, 2-4; Rom. 5, 4). The evil one works his malice through both. In the first instance, he wants to distract us from divine love; in the second, he wants to make us curse God.

Since we know his machinations, we should pray for deliverance from the temptations due to our own volition and for endurance in the trials which God allows for the good of our soul.

Saint Maximos ends by saying: ‘May all of us who call upon the name of our Lord Jesus Christ be delivered from the present delights and future afflictions of the evil one by participating in the reality of the blessings held in store and already revealed to us in Christ our Lord Himself, Who alone with the Father and the Holy Spirit, is praised by all creation. Amen’.