Religion / Wisdom & Word
Monk Arsenios of the Skete of Koutloumousiou, the Holy Mountain

According to Saint John of the Ladder, pride means: ‘Denial of God, an invention of the demons’. To put it more simply, pride was discovered and invented by the devil. Lucifer refused to render veneration and worship to his Creator, the Holy, Triune God, and in place of this he set himself up as god.

Terrible things happened, my friends, which are beyond the understanding of mere mortals. Lucifer dared to think and imagine himself as god, and once he’d really come to believe this inside himself, he fell, like lightning, from heavenly Paradise, dragging with him a host of other angels, who all became dark demons. As a result of this behaviour, the devil swore an oath, as the god he believed himself to be, that he would engage in hostilities with the Holy, Triune God and also with people, who were made ‘in His image and likeness’. People have been experiencing and feeling this hatred on the part of the devil for centuries, but his great secret is that he carefully hides his animosity, so that we can’t see it. 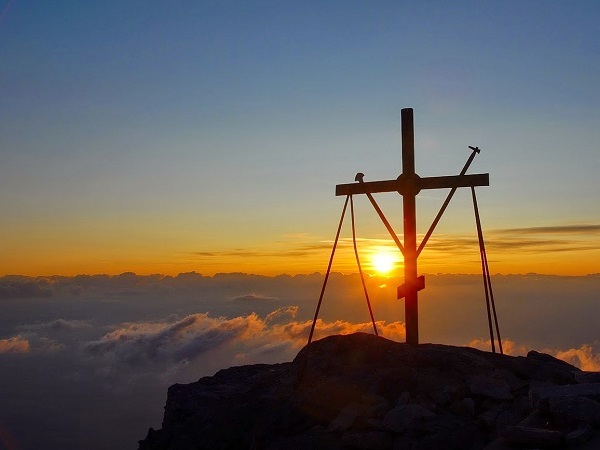 He brings disasters, but does so in such a way that people blame their neighbour for what’s happened to them, rather than condemning the evil one. And the main thing is that he does everything in his power to stop us discovering that we should hate the devil and all his works and not our neighbour. This is the point at which the whole secret lies, because it’s not in his interest for people, particularly Orthodox Christians, to turn against him.

In no way is it in his interest for Christians to forgive one another and, at the same time to consider him an enemy. But as we well know, we can’t declare hostilities and war against the evil one when, simultaneously, we harbour hatred towards our neighbour. The temptation towards hatred is very great and we often give in to it when it concerns our neighbour. In fact, there are some people who are so deluded that they boast about this animosity. We should know, though, that if we retain enmity towards our neighbour, in word or deed, then we can’t say even the Lord’s Prayer to God. How can we say to God ‘Forgive us our debts as we forgive our debtors’? Wouldn’t we be lying to God? And worse than that, we’d become a plaything of the demons.

A glaring example of this is Saprikios, who, although his neighbour begged his forgiveness for some misdeed he’d perpetrated against him, Saprikios refused to countenance it. He was arrested by the pagans, since he was a Christian, but he still couldn’t find the strength to overcome the devil, who remained at his side, waiting for him to betray his faith and make sacrifice to the idols. His neighbour continued to beg his forgiveness, even in the place where Saprikios was about to be martyred, but the latter refused and therefore didn’t have the strength to confess Christ. And then he gave even more joy to the devil by sacrificing to the idols.

If we harbour animosity towards others, my friends, we should be very careful, because we may do so for many years, to the point of not realizing that, behind this enmity, stands our common enemy, the devil. He’s the one who’s skilfully orchestrated the animosity between two people, but has carefully hidden his role because, were it to be revealed, the whole plot would fall apart and the people concerned would be reconciled. How can the workings of the devil be revealed? When one of the two parties understands the position of the other, then the devil is uncovered and doesn’t have a leg to stand on, because once one person really sees the point of view of the other, divine Grace immediately descends upon them, and when that happens, the devil disappears.

The newly-canonized Saint Porfyrios says that when a person is angry and is getting ready to attack another, either with words or blows, that person is in thrall to the devil who has placed a noose round his or her neck and is ready to choke them. Their salvation will depend on the attitude taken by the other person. If the latter is prepared to show forbearance and love, the person in thrall is immediately liberated, but if the animosity is returned then that’s the ultimate victory and satisfaction for the devil. So it should be obvious, my friends, that all our differences and hostilities are set in motion by the evil one and it’s towards him alone that we should direct our anger and animosity.

We are born good, without passions but our later development is due to the example of our parents and the rest of our environment (school, friends etc). If, as soon as a child’s born, it’s given to saintly parents in a holy environment, it follows that it will become a saint, because there would be no activity on the part of the devil in the environment in which it lived. An example of this is Saint Basil the Great, who was born and raised in an environment of sanctity. His parents and siblings are all saints of the Church. The strange thing is that Saint Basil was already sanctified, even before he was baptized, because he’d been sanctified by his surroundings. The question is, are there such conditions today? It’s a moot question. But what’s going to happen to our children when they’re born into an environment where their parents aren’t as saintly as they should be? It might then be a case of ‘every man for himself’. Those capable of realizing the wickedness of the evil one, who sows conflict and enmity among us, and are able to apply what we said above will be deemed great.

To sum up, there’s no greater foolishness than to hate our neighbour and not to hate our enemy. This is called a perversion of the soul, because, although at Holy Baptism a promise was given that we would be resolutely opposed to the devil and all his works, we have, alas, changed things round and distorted them, by turning our animosity onto our neighbour. May God grant all of us to understand properly this important issue which we’ve addressed, so that our animosity and anger can be directed only at our sole enemy, who is the devil and all his works.