The Icon of Our Lady of Consolation

As you go up the staircase to the right of the central door of the main church of the Holy and Great Monastery of Vatopaidi, there’s a chapel dedicated to Our Lady of Consolation. It was here that the wonder-working icon of Our Lady, a wall-painting from the 14th century which was once at the right edge of the outer narthex, was brought after the occurrence of a miracle, which we shall now describe.

In the old days, it was the custom that, as they left the main church after Matins, the fathers of the monastery would kiss the icon of Our Lady in the outer narthex. There the Abbot would give the keys to the gates of the Monastery, which had been closed during the night, to the gate-keeper so that he could open them. 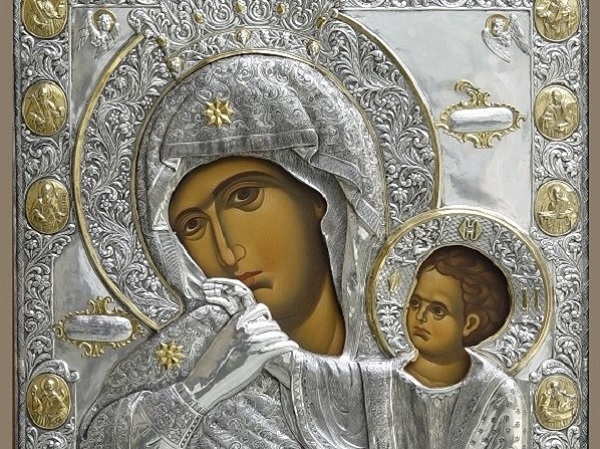 One year, at the beginning of the 14th century, on 21 January, the Matins service finished. The fathers withdrew to their cells to rest before beginning their daily duties. This was when the monastery gates would be opened. What they didn’t know was that pirates- at that time the scourge of the Aegean Sea- were lurking outside, ready to break in and enter, with the aim of pillaging the Monastery.

The only person in the main church was the abbot, who was engrossed in prayer. Suddenly, he was startled by a voice which seemed not to be that of a human being. In terror, he looked around, but saw no-one, because there wasn’t anybody else in the church. But some-one had spoken. He concentrated and, to his consternation, discovered that the voice was coming from the icon of the Mother of God. He bent his ear respectfully to hear what she was saying. He then heard her voice: ‘Don’t open the monasterygates today, but get up on the walls and disperse the pirates’.

Astonished, the Abbot fixed his eyes on the icon of the Mother of God and became aware of a great miracle.

The figure of Our Lady was alive. The infant Jesus, Whom she was holding in her arms, had also come to life. He moved His right hand and put it over His holy Mother’s mouth, turning His radiant face towards her.

In a sweet, child’s voice He said: ‘No, Mother, don’t tell them. They deserve to be punished because they’re neglecting their duties as monks’.

Then, with great maternal boldness towards her only Son, Our Lady, the Mother of God, lifted her own hand and gently removed that of Christ. She inclined her face towards the right and said more loudly‘Don’t open the monastery gates today but get up on the walls and disperse the pirates… And make sure you repent, because my Son’s angry with you’. She then repeated the warning for the third time: ‘Don’t open the monastery gates today’…After this, Our Lady the Mother of God and her Son returned to being figures in the icon.

Filled with wonder, the Abbot gathered all the fathers and related the supernatural event to them, repeating the words he’d heard from the lips of Our Lady and those of the Divine Infant to His Mother.

They all turned in amazement to the place where the wonder-working icon was and their astonishment increased even further. The depiction in the icon had been completely transformed and looked nothing like the one that had previously been there. It was in the form it still has today: Our Lady holding Christ’s hand under her mouth and inclining her head to the right to allow herself to speak. Her expression is full of boundless clemency, love, sympathy and maternal affection. Although Christ is depicted as an infant, He has the stern look of a judge.

This icon really is not made by human hand, because it was made in the form it has today not by a human artist but by the Grace of God, after this wondrous intervention on the part of Our Lady for the preservation of the monastery. It was then named ‘Our Lady of Consolation’, because according to pilgrims to the monastery- who cannot get their fill of gazing at it- the sight of the sweet expression on the face of Our Lady brings respite, rest, serenity and consolation to the human soul.

Through this icon, we see once again the maternal boldness of the Mother of God in interceding to her ‘Son and God’ for forgiveness of our sins and her saving prayers through which she relieves us of the torments which are our due because of the multitude of our sins.

The icon was transferred to the special chapel of the Consolation. The monks keep an icon-lamp in front of it which is never permitted to go out, a Service of Supplication is sung every day and on Fridays there’s a Divine Liturgy. In former years it was the custom that monks were tonsured in this chapel.

Also associated with this icon is the life of Saint Neofytos, who served as the sacristan of the chapel of Our Lady of Consolation.

The saint was away on Monastery business for a time at a dependency on Evia and there he fell seriously ill. He begged Our Lady to allow him to die in the monastery of his repentance and immediately heard her voice saying: ‘Neofytos, go back to your monastery and, a year afterwards, prepare to leave this life’. He thanked Our Lady warmly for the extension to his life and told his disciple to get ready to return to the monastery.

And, indeed, a year later, after he’d taken Holy Communion one day, he went up the stairs to the chapel of Consolation and again heard the voice of Our Lady: ‘Neofytos, it’s time for you to leave’. He went to his cell and began to feel unwell. After he’d received forgiveness from all the fathers of the community, he commended his spirit to the Lord.