Fasting and its Benefits (3)

1. As we’re now going to speak of the stomach, we’ve decided again- as with all our themes- to turn our philosophy against ourselves. Because I wonder if anyone has ever been free of it before residing in the grave.

2. Gluttony is hypocrisy of the stomach. When it’s filled, it complains about lack; when it’s stuffed to bursting it bemoans being hungry. Gluttony creates seasonings, and is the source of sweets. You cut it off in one place and it pops up in another. Stop that and a new one will open. Gluttony’s deceptive: it eats moderately but at the same time would happily devour everything.

3. A full belly is the father of fornication, but a stomach grieving for food leads to purity. Pet a lion and you may tame it, but coddle the body and you’ll make it ravenous. 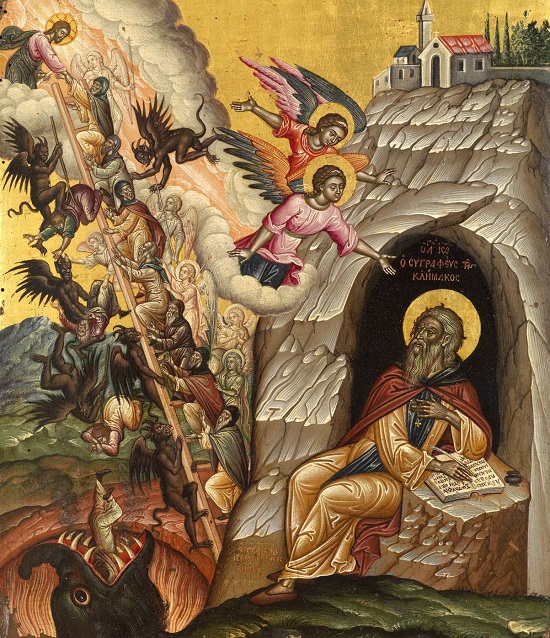 4. Jews celebrate the Sabbath and feasts and a gluttonous monk celebrates on Saturdays and Sundays. He counts the days to Easter, and prepares the food days in advance. Those who are slaves to their belly think about the food for the feast; the servants of God think of the gifts with which they’ll be enriched. If a stranger calls by, slaves of gluttony are all love: born of gluttony. They think that giving themselves a dispensation is for the comfort of the other person. Because of the presence of others, they allow themselves wine and, believing they’re hiding their virtue, they’re actually becoming a slave to their passion.

5. Often vanity and gluttony are at odds over the possession of a wretched monk as if they were haggling over the purchase of a slave. Gluttony urges him towards giving himself a dispensation, while vanity recommends making a display of his virtue. A wise monk, however, will avoid both, at the appropriate moment banishing the one with the help of the other.

6. As long as the flesh is robust, let us at all times and in all places observe restraint. If it’s been brought under control – which I don’t believe can happen this side of the grave – we should hide our achievement.

7. I’ve seen seen priests, tricked by demons, giving a blessing to younger men, not in their charge, to allow them wine and so on at official meals. Now if these priests are acknowledged to be in the Lord, we may indulge, though within limits. If they’re lax, however, we should pay no attention to their permission, especially if we happen to be fighting the fire of the flesh just then.

8. God-forsaken Evagrios thought he’d become wiser than the wise in both the form and content of his writings. The wretched man was deceived, however, and in many things seems to be more mindless than the mindless, especially in this. He taught: ‘Whenever the soul desires a variety of foods, let it be brought to heel with just bread and water’. This injunction is like telling a child to scale a ladder in one step. We would refute his instruction, however, and say instead: when our soul wants different foods, it’s seeking something in its own nature. So we have to use a ploy against this most cunning stomach of ours, unless we’re threatened by a really serious crisis, or are in mourning or doing penance for a previous transgression. Let’s first of all cut out fattening foods, then spicy ones and then tasty ones.

9. If possible, give your stomach food that’s filling and easily digestible, thereby satisfying its insatiable appetite through generous portions. In this way, with easy digestion, we’ll free ourselves from our burning flesh as if from a scourge. And if we examine things, we’ll see that most of the foods that inflate the stomach also stimulate desire.

10. Laugh at the demon who, when supper is over, suggests that you leave your duties till the next day, because at the same time the next day, he’ll come back with a different suggestion.

11. The restraint appropriate for those who haven’t fallen into grave sin is different from that of those who are have. The former use inclinations of the flesh as a measure to understand their state, while the latter confront the flesh with severity and inflexibility until their dying breath. The former try to retain control of the mind, while the latter try to placate God by spiritual sorrow and softening of the heart.

12. For the perfect monk, the time of joy and consolation is the state of being above the fray. For those who are striving, it’s a time of battle. For those enslaved to their passions, it’s the ‘feast of feasts and the festival of festivals’.

13. In their hearts, gluttons dream of food and nourishment, whereas the penitent dream of hell and the judgement.

14. Take charge of your stomach before it takes charge of you, or else you’ll be ashamed of yourself when you fast. This is understood by those who’ve fallen into that unspeakable mire. Those who are eunuchs [in the spiritual sense, see Matth. 19, 12] have not known this sin.

15. Let’s cut off the demands of the stomach with the thought of eternal fire. Some who’ve given in to these demands have had to have parts of their body cut out and have thus died twice, in body and in spirit. If we investigate carefully, we’ll see that all our moral shipwrecks are caused by gluttony.

16. The mind of those who are fasting is clear and attentive, whereas that of the heedless is full of impure images. A full stomach dries up the springs of tears, whereas, when it shrivels, it actually produces tears.

18. Examine yourself at the first hour of the day, then at midday, then at the end, before eating and you’ll discover the value of fasting. In the morning, your thoughts jump around from one thing to the next; by midday they’ve settled down somewhat; and by sunset they’re been completely humbled.

19. If you don’t indulge the stomach, your mouth will stay closed, because the tongue flourishes where food is abundant. Fight as hard as you can against the stomach and be constantly vigilant over it. If you try, however little, the Lord will quickly come to help you.

20. The more that leather bottles are kept supple by use, the more they can hold. But if they’re neglected and unused, they shrink and don’t hold so much.

21. Those who force food into their stomach expand their intestines, whereas those who fight against it cause them to shrink. When they’ve shrunk, there’s no need for a lot of food and, in this way, we fast naturally.

22. Thirst has often overcome thirst. But it’s difficult, in fact impossible, for hunger to defeat hunger. If the stomach gets the better of you, tame it with physical activity. And if this isn’t possible because of illness, fight it by keeping vigils.

The Ladder of Saint John the Sinaite
Discourse 14 – On Gluttony