Delegation from Norway visits the Metropolitan of Thessaloniki Anthimos

A large delegation of Norwegians was received by the Metropolitan of Thessaloniki, His Eminence Mr. Anthimos, on the occasion of their educational tour and pilgrimage to Byzantine churches and other Christian monuments of the city of Thessaloniki. The delegation headed by Torstein Theodor Tollefsen, professor of Ancient and Byzantine philosophy at the University of Oslo, was consisted of emeriti professors, doctors, researchers, other philhellenes and friends of Orthodoxy from Norway, as well as members of the Norwegian Orthodox Parish of St. Nicholas in Oslo, which belongs to the Ecumenical Patriarchate, and the Parish of the Metropolitan Church of The Annunciation of the Mother of God in Oslo of the Metropolis of Sweden and All Scandinavia. 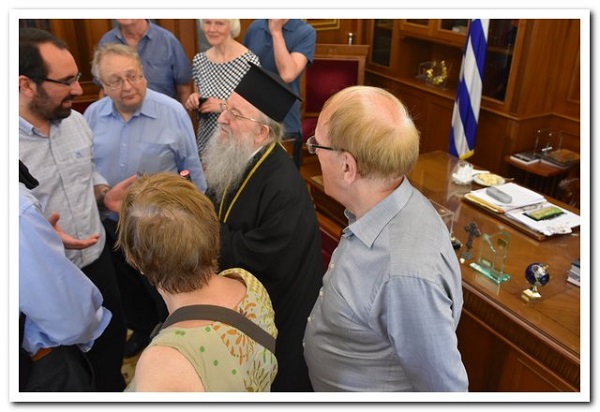 His Eminence, the Metropolitan Anthimos received his visitors cordially and personally and offered a considerable amount of time to communicate with them, despite his demanding schedule. Professor Tollefsen explained to His Eminence that the delegation members are participants in the Seminar of Medieval Philosophy, which he has established 25 years ago and takes place at the Department of Philosophy in the University of Oslo on a weekly basis. The aim of the Seminar is to study philosophical and theological texts with a particular emphasis on the patristic literature, both East and West, from the times of Early Christianity up to St. Gregory Palamas and onwards. He mentioned to the Metropolitan that Thessaloniki was decided to be this year’s destination for the annual excursion of the Seminar to significant to Orthodoxy places, following previous visits to Constantinople, Ravenna, Mystras, monasteries in Serbia, and other historically important places.

Among the reasons for selecting Thessaloniki was the figure of St. Gregory Palamas, who becomes more and more known in the West, both because of his defense of Hesychasm and of the distinction he established between substance and activity in the Divinity that was one of his invaluable theological contributions. It was a strong wish of the seminarians to visit and venerate the relics of St. Gregory, which are now placed in the homonymous Metropolitan Church in Thessaloniki. 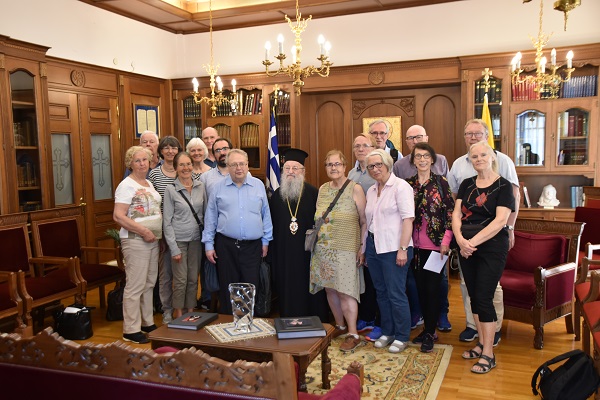 During the reception, His Eminence, Mr. Anthimos was informed about the forthcoming publication, at the Oxford University Press, of the book of professor Tollefsen on St. Theodore the Studite and the Defense of the Icons in the 9th century Byzantium. Stressing the importance of St. Theodore’s authorship, the Metropolitan mentioned his late professor at the School of Theology in the University of Athens, Nicholaos Tomadakis, who had studied St. Theodore’s works, while he praised the hymnographic compositions of St. Romanos Melodos. He stated with emphasis that, Melodos’ hymnology is of such a richness that it would suffice alone for initiating people to Orthodox theology.

Subsequently, the Metropolitan congratulated both professor Tollefsen for his work and the invaluable initiative of studying and disseminating greek philosophy and patristics in Norway, and the delegation members for their presence in Thessaloniki. He shared with them his joy and wonder for the increased interest in Byzantium and the Orthodox patristic tradition that is emerging in this remote Nordic land, and he wished all of them a pleasant stay in Thessaloniki, a fruitful completion of their pilgrimage and a safe return to Oslo. The members of the delegation expressed, in turn, their genuine joy and gratitude for the honour they were given in encountering His Eminence and they offered him a symbolic gift from Norway.