4. The slanders
We have left to the end any reference to his cross. At various times people came to him asking for spiritual guidance. But these people had wicked thoughts, either from their passions, which had taken over their soul or from some undiagnosed mental illness, in the medical sense. They became tools for the prosecution and were the cause of great tribulations and sorrows. Although he was endowed with extraordinary mental acuity, the blessed man [Elder Iosif], was unable to see the danger. He saw the good in everyone. According to the Old Testament Proverbs, ‘the innocent believes every word’[10]. He welcomed everyone with the same goodwill and alacrity. ‘I am indebted to both the wise and the foolish’, as Saint Paul said[11].

And, of course, the spiritual law applied. It was inexorable, particularly towards that tragic person who raised the storm in Cyprus. But the Elder’s loving forbearance was evident, as was that of Christ on the Cross or that of the Protomartyr Stephen when he was being stoned. 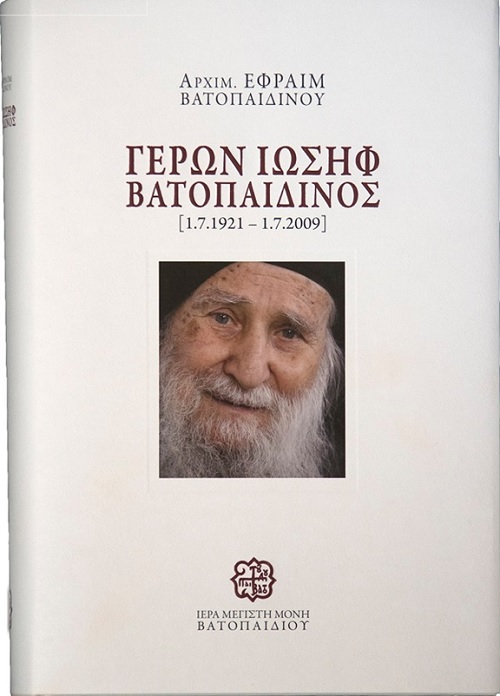 He had made this forbearance his own, because he was a great empirical teacher of self-condemnation and an expert on true repentance.

He remained at peace because, as he said, no-one could condemn him more than he condemned himself. He was not concerned about the blemish to his own reputation nor his persecution, but only about the fall of those people, and he prayed for them with tears. The only root cause for him was the ‘ancient evil’- his term for the devil, by whom he was revolted, having had experience of warfare against him in the desert. Because the latter [the devil], was unable to strike a direct blow against the Elder, he later planned and carried out a violent campaign against two exceptional sons of the Elder, Athanasios and Efraim, who had supported him robustly. It was they who had stood by him in his trials[12].

Elder Iosif was a man of abounding paternal love. It was not his fault if certain others couldn’t bear it. The river was full and in spate because he was so rich in Grace. Some other people were vessels too small to receive it. If they had had only a modicum of self-knowledge they would have humbly and gratefully taken the little they could find room for and would have benefitted from it. But it is very difficult for a soul with hidden depths of egotism to accept its shortcomings.

Within the whirlwind of his trials, what he was interested in was the next step. And, to be sure that it was God’s will, he always asked Saint Paisios and Elder Efraim Katounakiotis. The latter would write to the monk Athanasios, as he was then- now Metropolitan of Lemesos- on 26 August 1987, during the early days after their settlement in Vatopaidi: ‘The whole of the life of your Elder is one of tribulations, then sorrows again, tortures again, tears again and then tribulations all over again. Yes, but what glory, what martyr’s crowns await him. Have you thought of that?’[13]. All this suffering would prove a blessing for Vatopaidi when Our Lady entrusted her Holy and Great Monastery to him, together with her Girdle, which is kept there. Much work needed to be done, but he would see the brotherhood increase and prosper and the brilliant careers of his charismatic, beloved sons, Athanasios and Efraim, who helped him bear his cross. It was there that he surrendered his blessed soul, with a unique sign from heaven evident on his dead body.

He was buried within the Monastery, as its new benefactor.

It is our belief that his path of suffering was the most sacred chapter in his life and the herald of abundant and unwaning Grace.

We would like to express our fervent gratitude to His Beatitude Ieronymos, Archbishop of Athens and All Greece, who with his paternal love and confidence continues to embrace the holy Abbot.

From this podium we would also confirm that we retain our unswerving respect and devotion to the Mother Church of Constantinople, in line with the policies of our holy Father.

I personally would like to thank the very reverend Abbot, Elder Efraim, for entrusting me with the presentation of his work.

Having thanked you all for your kindness and patience in listening to us, we will finish with the paternal exhortation of the Patriarch: ‘We therefore paternally urge all the readers of this book- laity, clergy and monks- to learn from the life and ecclesiastical ethos of the late Elder Iosif, from his healthy ecclesiastical attitude and his relationship with the Holy and Great Mother Church in Christ, from his virtue and obedience. In this way they will make themselves fellow-pilgrims in the love, obedience and virtues which the late Elder considered to be ontological elements of the soul of those who strive spiritually and who are finally sanctified’.