1. The call through a divine vision
In his fifteenth year, while he was on a hill at Paphos, floundering in the dark void because of a sense of the pointlessness of it all- he’d watched a documentary with scenes from World War I and the Asia Minor Catastrophe- the Lord appeared to him perceptibly, in a transmundane light. He was full of love and said to him: ‘Sokratis, this is why I made human beings. People are immortal’. Even he himself was never able to put into words the miracle which occurred in his adolescent soul. What he did realize, however, was that everything to do with his divine calling began then. The kindling of his heart with love for Christ was such that it remained forever ‘burning’, as was the case with Luke and Cleopas when the Risen Lord appeared to them on the road to Emmaus [2]. His whole-hearted and lifelong devotion had its beginnings in that vision. It rekindled his zeal. He lived and died remembering it… Then Jesus ‘opened his mind, so that he could understand the scriptures’[3], as happened with the illiterate Apostles after the Resurrection. 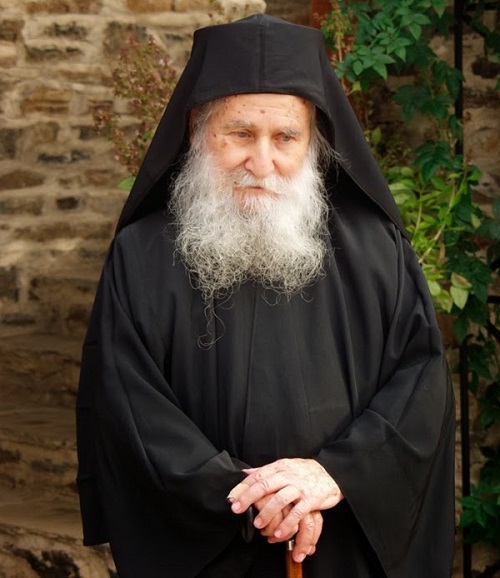 Sokratis had left school after the third class of primary school. A year after the divine vision, during which he was showered with divine love, he went to the Monastery of Stavrovouni. His physical labours now seem incredible, yet, at the same time, and despite his previous difficulties with reading, he was now able read, understand and learn the holy Scriptures and Patristic works in the original. Over time, he became a formidable interpreter and analyst of these sacred texts. The root of his theological gift was in the divine vision, which Blessed Iosif the Hesychast saw as a sign of revelation. This is why he not only permitted him [Sokratis] to join his brotherhood but also gave him his own name.

The divine love which had pierced his heart would, at the end of his life, become a compelling desire to leave this world. ‘Son, I’m waiting for the train but it isn’t coming’, he said to Fr. Efraim. He desired now to see eternally the ‘the ineffable beauty of the face of Christ’.

Over the centuries, many people have been called as a result of a divine appearance, a manifestation of a saint or some great sign from God. The list in our Lives of the Saints is long, so we shall refer to only two of our modern saints, whose experience helps us to evaluate that of Elder Iosif.

Saint Paisios was also fifteen years old, ‘distraught with confusion, caused by thoughts of doubt’ [4] when he was deemed worthy of a divine vision. Some friend of his brother’s had explained Darwin’s theory to him, with the aim of shaking his faith. Christ then appeared perceptibly to him, in transmundane light, holding a Gospel book opened at ‘Those who love me will live, even if they die’[5]. He also said these words to him, with great love [6]. The vision of Christ and His love not only dispelled the confusion of his thoughts, but also made his heart burn, throughout his life, with divine love, and he became Saint Paisios.

Gerasimos Mikrayiannanitis [belonging to the skete of Little Saint Ann’s], later Hymnographer of the Holy and Great Church of Christ [Ecumenical Patriarchate] was a young monk of twenty-two, alone in the house of the Honourable Forerunner, in the then forbidding Skete of Little Saint Ann, having been abandoned by his elder, who, in the year 1925, out of unbridled fervour, joined the Zealots and left the Holy Mountain to fight on the side of the Old Calendar schism. Gerasimos suffered harsh temptations and was attacked by demons. Then he, too, saw Christ perceptibly, shining, in his own words, brighter than the sun. The Lord said to him: ‘What’s the matter, son? I haven’t abandoned you, I’m here with you. I tested you and now it’s all gone’[7]. And the great Gerasimos said: ‘Since then I’ve experienced great joy in the Lord and I strive to save myself’. On another occasion, when he was relating this story to his spiritual sons, he revealed a remarkable detail: that the Lord appeared to him them with the imprints of the nails and the wound in His side. The symbols of the Passion were of great significance. It was at this time that he was given the sumptuous gift of hymn-writing. His first hymnographical manuscripts date from that year, 1925, and were discovered by his disciples after his demise.

Thereafter, many divine signs ‘in dreams and visions’ followed in the life of our blessed Elder Iosif: divine insights in the course of which he was cured of debilitating illnesses; warnings of temptations; or consolation on his path of suffering.