Twenty years ago today His All-Holiness Ecumenical Patriarch Bartholomew was in Canada.

Twenty years ago today His All-Holiness presided over the Divine Liturgy at the old Maple Leaf Gardens in Toronto, Ontario. The Liturgy included 17 bishops, 70 priests, and 19,000 faithful. It was a day for those who were present have and will never forget. It was the high point of the Ecumenical Patriarch’s remarkable nine-day, eight-city trip to Canada. 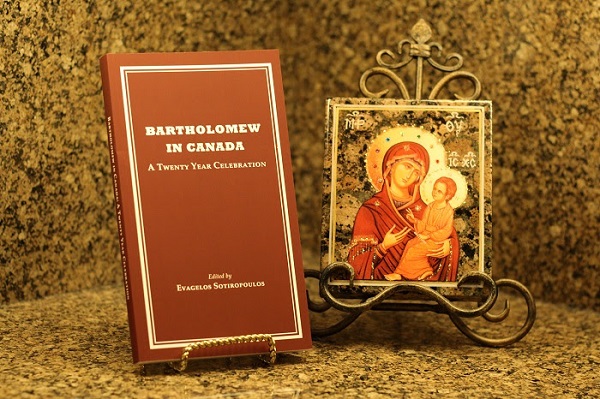 To celebrate this milestone anniversary of the Patriarch’s visit, the Ecumenical Patriarchate Archons in Canada, with the blessing of His Eminence Metropolitan Sotirios, developed and have published an edited volume of works under the title, Bartholomew in Canada: A Twenty Year Celebration.

The book begins with a foreword by Metropolitan Sotirios and includes chapters by leading Orthodox theologians and scholars, whom our Holy Metropolis and Archons in Canada gratefully acknowledge and sincerely thank.

The introduction was written by E. Sotiropoulos, Archon Ostiarios, who also edited the volume. In addition, the book includes the homily delivered by His All-Holiness at the Patriarchal Divine Liturgy at Maple Leaf Gardens, together with photos from across the country of his 1998 visit.

While celebrating twenty years of Bartholomew in Canada, we hope that this volume will contribute to the research and literature regarding His All-Holiness and the venerable Ecumenical Patriarchate.