The Church as a Therapeutic Center: Consequences of Man’s Fall

The neptic teaching of the Church that refers to the inner world is strongly related to the social teaching. It might be supposed that the ascetic life of the Church has no contact with reality. In fact, the opposite is true. Only by making this analysis of the Fall are we able to solve the problems emerging in our life. We saw some of the consequences before. Now we will turn to the dramatic consequences of man’s departure from God that show that Orthodox theology is a most radical and modern action. 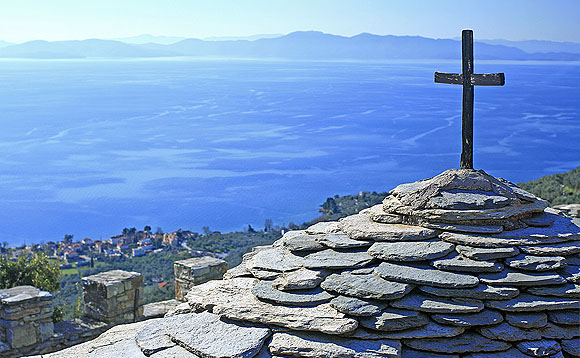 The loss of the divine Grace, which constitutes the true illness of man, brought about both spiritual and bodily death. Spiritual death is man’s departure from God, and bodily death is the soul’s separation from the body. God did not create man to die, but bodily death came as a result of the Fall.

The first consequence of the fall was the darkening of the nous. Saint Gregory Palamas says: “If the nous departs from God, it becomes either bestial or demonic.” When man’s nous leaves God and is darkened, it is inevitable that all inner energies of the soul and the body are distorted. After the nous loses his movement according to nature, which is movement toward God, he desires alien things and his greed cannot be satiated. He indulges in carnal pleasures and knows no limit to these pleasures. While he dishonors himself with his acts, he insists on being honored by everyone. He wants everyone to flatter him, to agree with him, to cooperate with him, and when this is not offered, he is filled with wrath. His anger and his wrath against his fellow men is like a serpent. Then man, who was created in the image and the likeness of God, turns into a killer and becomes the likeness of the man-killing devil. The nous’ departure from God makes man bestial or demonic; he becomes a beast or a demon. Therefore, with the darkening of the nous, the passions go rampant.

A second consequence of the Fall is that the soul and the entire man move contrary to nature. The Holy Fathers teach that there are three movements of the nous: according to nature, above nature, and contrary to nature. The nous’ movement contrary to nature takes place when man does not see God’s Providence and His justice in what happens in his life, but rather believes that the others are unfair to him and he revolts against them. The nous’ movement according to nature is seen when man considers himself and evil thoughts as responsible for all his hardships. And the movement of the powers of the soul above nature occurs when the nous moves toward God, finds the fruits of the All-Holy Spirit, and sees the glory of God. In this stage, the nous becomes amorphous and shapeless; that is, it is freed from images, fantasies, and demonic thoughts. In the illness of the nous, we can find all the horrible distorting results of function and movement contrary to nature.

This is a very important point, because so long as man is ill he is possessed by many images produced by the imaginative part of the soul. So-called “psychological problems” are, almost all of them, results of suspicion, of logical thoughts, all cultivated in the favorable climate of imagination. Today it is an observed fact that the more one is psychologically sick, the more his imagination is excited.

A fourth consequence of the Fall of man is that his emotional world gets sick. A spiritually healthy person is balanced in all his activities; he is not simply moved psychologically and emotionally by the various events of his life, but has true communion with God. Therefore, he is not moved emotionally by nature and its beauty, but rather sees it spiritually, because he sees God’s energy in it. The psychological joy of the inexperienced, which is not untouched by imagination, is different from spiritual joy, which is a product of the All-Holy Spirit. In a sick man, emotion is mixed with the passions of self-indulgence.

In Church, through our struggle and above all by receiving the Grace of God, we transform all emotions and all sick situations. This is achieved by repentance. Then all psychological events become spiritual states. Manifestations of a psychologically sick person are not observed in a repenting man.

Therefore, the illness of the soul, which manifests itself primarily in man’s nous, has tremendous consequences for the entire organism. A sick man becomes impassioned, self-loving, and self-indulgent, and this has repercussions for the whole society. In the Orthodox Church we say that it is possible for someone to be physically healthy and psychologically balanced because of his intelligence and his strong reason and not need a psychiatrist, and yet, still be ill if he does not have the Grace of God. The darkening of the nous is the greatest illness of man.

The whole series can be viewed here: The Church as a Therapeutic Center