‘They Brought a Paralytic to Him’

The person of the paralytic The paralytic wasn’t some neurotic person who’d sinned deeply and was consumed by guilt to the point of paralysis, as a psychiatrist might tell us. The man wasn’t neurotic, but certainly a sinner and his illness was, indeed, the result and consequence of a particular sin. Efthymios Zigavinos says that many illnesses are the product of sins. In his treatment of the paralytic, the Lord first cured the root cause, which was sin, and then healed the body, which was suffering from the fact that this unfortunate man had fallen into some sin. 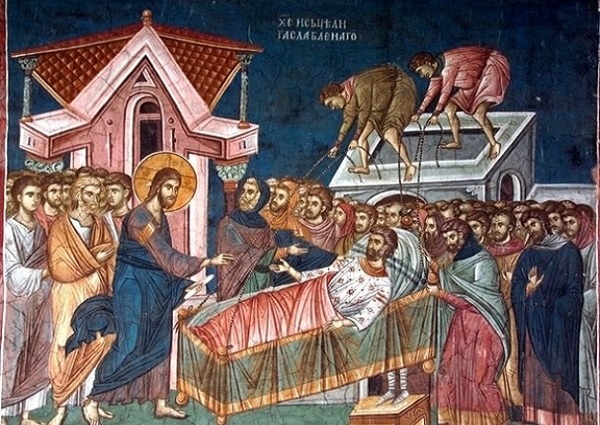 No doubt the Pharisees thought along these lines: ‘Christ is a deceiver because he cures the invisible, that is the soul, which can’t be seen and so no-one can tell whether the patient’s sins have been remitted. On the other hand, he leaves the body, which is visible and harder to cure. Besides, it was our soul that was first strangled by the noose of sin and only then, in accordance with God’s righteous judgement, did sickness and death enter human nature’.

According to an important observation by Theofanis Keramevs (Theophanes Kerameus), Christ sometimes performed a miracle having first seen the faith of the sick person, provided they were of sound mind. In the case of the blind men, for example (Matth. 9, 29) Christ acted ‘in accordance with their faith’. On other occasions, however, such as with Hananiah, Jairus, the centurion and this paralytic today, He performed the miracle not on seeing the faith of the person afflicted, but that of the people who were asking Him to effect a cure. ‘And when Jesus saw their faith, He said to the paralytic…’ (Matt. 9, 2). It may be that some of these afflicted people, particularly the paralytic in today’s Gospel, were probably not of sound mind. Their mind would have been darkened.

How Christ addressed the paralytic

The Evangelists Matthew and Mark say that, when Christ saw the paralytic, He said ‘Take heart, son. Your sins are forgiven you’ (Matth. 9, 2 and Mark 2, 5). Saint Luke, however, says ‘Man, your sins are forgiven you’ (Luke 5, 20). Saint Cyril of Alexandria says Christ calls the man ‘Son’, either because we’re all children of God Who created us or because Christ saw that the sick person accepted Him as Lord and Creator.

Saint Gregory Palamas calls it ‘a blessed address’. The sick man hears the word ‘Son’, and is adopted by the heavenly Father. He adheres to the sinless God and becomes himself without sin, through the remission of His transgressions. Everywhere in the New Testament, the gift of adoption is apparent. All those who bore the signs of sin found their healer. Christ is our elder brother, and has made us children of God.

The true cure of the sick

Many people who suffer from a malfunction of the soul which has repercussions on their bodily health only go to psychiatrists or psychologists. The Church doesn’t reject the scientific work of these doctors. In any case, it considers it creative, provided it doesn’t exceed the bounds of science and doesn’t do away with God. The bitter truth is that our various ailments aren’t to be cured with sedatives nor with the admittedly wonderful interventions and analyses of psychologists and psychiatrists.

We need the living presence of the Lord and His remission of our sins in order for a real ontological transformation in our behaviour to come about. We need to feel Christ as our brother and father. We have to trust in His Grace, through the sacraments of repentance, confession and the divine Eucharist.

The presence of Christ among those who have decided to change their life, very quickly brings peace to the soul, gives them security and a permanent spiritual state without insecurities and phobias. This is the cure we should be looking for.