Sin and Sickness: An Orthodox View (3)

Of course, all of this doesn’t mean that sickness is removed with the coming of Christ into the world, despite the fact that, when announcing the cure of the sick, Christ also indicates the presence of God in His own Person. Apart from telling them to sin no more, Christ also prophetically warns: ‘lest worse things befall you’. This warning is not only of a personal nature to the invalid concerned but is also a prophetic lament over the afflictions which will accompany the future of humankind. The mystery of the divine dispensation is now an accomplished historical fact, through the incarnation, crucifixion and resurrection. Our clay has been therapeutically and unifyingly assumed by the divine nature and now sits at the right hand of the Father. But the whole structure of salvation cannot remove the all-powerful fact of human freedom, which was given to each of us irrevocably when the image of God was placed in each of us. And so, despite God’s beneficence and His warning both in paradise and through Christ in the Gospel, we still turn to sin and cause ‘the worse’ to befall us. In this particular case, ‘the worse’ is not merely that someone will become more ill than they had been. It’s the hardening of the heart that occurs when people forget, or worse, scorn the divine gift. When being cured from sickness and sin doesn’t lead to the praise and glorification of God and the security of repentance. Then, selfishly and self-centredly, people transform the cure from being a cause of salvation into an opportunity for sin. 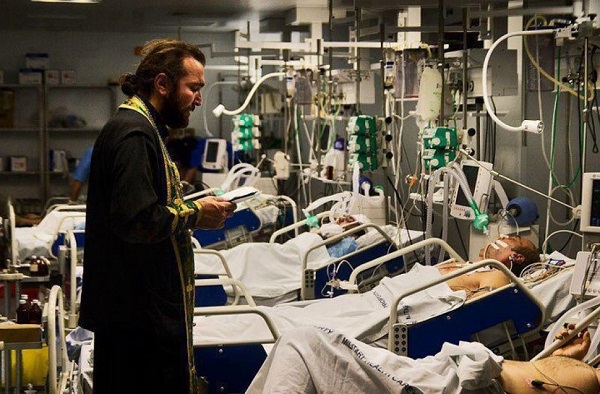 This is where an especially noteworthy facet of the therapeutic process becomes apparent: if it’s to become complete, it requires human acceptance and input. God, acts as almighty, but not as a dictator. He waits for the response of human freedom to his gift, so that, apart from the sickness of the body, He can also cure the will. He can make us able to desire Him and love Him freely. He can make the created image turn permanently to the Original.

So it’s clear in the Biblical narrative, that Christ considers sin as the fundamental sickness of human nature. This is why He often begins His cure by giving remission of sins. As Creator, He knows the terms of our nature better than anyone, He knows full well that it’s difficult to edify people, either through the fear of sickness or the blessing of healing. As the drastic and final healing of the centre of sickness -sin- He offers His death on the Cross. There, sickness and human pain in general acquire a different meaning. Christ declares that ‘when I am raised up, I shall draw all people to myself’. This attraction marks a qualitatively different perspective on human existence, which, to a great extent represents an inversion. Isaiah’s prophecy is fulfilled and Christ does for us what the least cannot do for themselves and which is described in such tragic language and productive despair by Saint Paul in his Epistle to the Romans: ‘What a wretched person I am! Who will deliver me from this body of death?’ Sin is defeated all at once with the cross, death and the resurrection.

In the end, all of this is an incomprehensible mystery for us in its essence, though accessible through the life of the Church. Our sacramental change through baptism, chrismation, the Divine Eucharist and holy unction gives us the possibility of seeing sickness as participation in the Cross which leads to the Resurrection. Not any longer as a means of edification, but as a state of Grace which leads to deification. This is how sickness is seen through the perspective of the dispensation of salvation.

Even if we’ve managed a rough sketch here of the relationship between sin and sickness through a theological prism, there remain burning questions for us ourselves, as well as for those who will inevitably address them to us:

1. How is the relationship between sin and sickness experienced in practice by each one of us?
2. How can we codify, explain and transmit this duality to other people, who are either close to us or distant? How can we deal with difficult cases, such as the serious illness of a young person, or the sudden death of a loved one?
3. How can we speak to other people about all this? Are they all in a position to hear and take in the same words?

There may be no better prism through which to examine these questions than that of the ascetic literature of our niptic tradition. Through its surgical analysis of the human personality, this niptic tradition can also delve into the mystery of our psychosomatic being, in a spirit of charitable discrimination and with the aim of our sanctification and complete cure. There are many references in the texts of the ancient ascetic fathers. Rather than having recourse to these for assistance in presenting my view here, however, I’ve chosen to look at the writings of contemporary saints and outstanding elders, such as Saint Paisios, Elder Sophrony from Essex and Elder Aimilianos from Simonopetra. The discourse of these saints and elders is easier for our own generation to understand. We should remember that even when these elders are addressing monastics rather than lay people, they know very well that their audience consists of people who were born and grew up in this age of rationalism, of questioning everything, of consumerism on all levels, of the mechanization of even the human body, and the pursuit of the facile. When he was head of the Athoniada School, Bishop Chrysostomos of Rodostolon used to say: ‘On the Holy Mountain we issue only death certificates, not birth certificates’. What he meant was that all the monks there to a certain extent carry with them the experiences, the problems and the sins of the outside world.