Orthodox Theology and the Judgment of History (3)

For head of the Orthodox Church is neither a man, nor an angel, not even any other creature of God, but the very God-Man, the historical Christ, the Son of the Virgin, Perfect God and perfect Man, Son of God and Son of man. 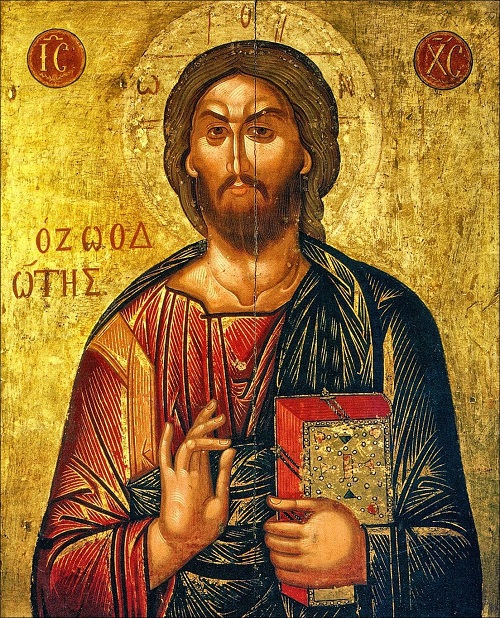 The Orthodox Church is not product of the historical evolution of an abstract, or philosophical, Christianity. But is a fact of a continuous extension in space and time of the Pentecost. The Orthodox Church is identical to the Pentecost, extended in history and the world, in order for the world, all creation and the mankind to become Christ by Grace. That is, in order for all to become Theanthropic Body having as its single head neither a human being nor an angel, but Him the very Blessed Son of the Virgin, the historical Christ Himself, the historically revealed Uncreated and hypostatic God, the One of the Trinity.

The Great Church of Christ, the Mother of Orthodox Churches, The Holy, Eastern and Orthodox Church of Constantinople will preserve this fundamental truth of Orthodoxy as the most precious treasure, dressing it with the Doctrines of the Ecumenical Synods. This Truth will be transmitted by the Eastern Orthodox Church of Christ to all the Orthodox Churches around the world. All Christians and all Christian denominations in East and West that, in one or another way, have either remoted themselves from this genuine Truth and theological Experience or have not approached it yet -because of historical circumstances and difficulties- are invited to (re)turn to this fundamental Truth and the life-giving implications of Orthodox Theology of the Eastern, Orthodox Apostolic and Catholic Church.

All other Christian doctrines, Christian denominations, churches or religions, and so on, they are –proportionally and accordingly to each of them- located within the Holy Orthodox and Catholic Church as potentially Orthodox Churches; as a possibility to become truly Orthodox Churches. They may grow and acquire the fullness of the Orthodox Church and the fullness of the Triune God, should they move towards the Trinitarian and Living God and get free of any necessity of earthly, secular, Power and endocosmic, earthly self-affirmation; should they receive the Whole Christ, His Whole Church and All His Theology as the Orthodox Theology.

It is possible that even a single truly Orthodox Christian can be saving and carrying on the entire Orthodox Church. Such a person can be testifying the Whole Christ without reductions, diminutions, and distortions of the Lord’s Person.

Orthodox theology and the Orthodox Church are identical and contain all the Truth about God. They contain the complete Image of God as He Is in His Majesty and His Truth.

This is why Orthodox Church, Faith, Worship and Theology do not refer to any religion that stands by other religions, Christian or monotheistic, Buddhist, Muslim or anything else, humanwise respected and comprehensible. Religions in general are established and move in the space of subjectivity and morality, the space of human needs for individual or social prosperity and self-affirmation, for overcoming the fear of the unknown and the death.

But this is not the case in the Orthodox Church, worship and theology. Here man becomes freed from any need and fear by entering completely, as body, soul and spirit, to the area of Divine Being. Here man becomes God by Grace and participant in the Life of the Triune and personally Living God Himself.

It is on these grounds that any Synod, Ecumenic or local Council, but, in any case, Orthodox, ought to always reveal the one and fundamental truth, that ‘God revealed Himself in Flesh…’.

Any kind of heresy, whether Eastern or Western, in one way or another, disputes and abrogates this Fundamental Truth that constitutes the quintessence of Orthodox Theology: ‘God revealed Himself in Flesh…’. This is the unbreakable foundation of every Orthodox Church, the foundation of the One and Holy, Catholic and Apostolic Church.

When, through Christ the God-Man, man encounters with the Triune God, then an explosion of an indescribable joy happens both in and out of the deified human being. Then, man wishes that all humans are saved and that they know the Lord. He wants all people to be risen from the death. He wishes that nothing stays in death. Then, such a person becomes what the great St. Isaak the Syrian says, ‘a merciful heart for the sake of all creation’. Precisely as St. Seraphim of Sarov and all the Saints and the God-bearing Fathers, this person becomes an affectionate mother and a heart full of eros for the whole of the creation, in a manner reminiscent of what Christ addressed to the Great Paisios, who was praying even for the demons and the enemies of the Truth: ‘You, Paisios, you became alike to me in Love’. This is perfect Love, this perfect and ecstatic Eros of the Living God for all His creatures and all His beings. This is the perfect day of the Lord and God the Truthful Savior and Messiah, Christ the God-Man. This is the perfect Orthodox One Church of Christ and this is its perfect theology in Christ the Jesus the Truthful God and man.