In the course of His earthly travels and in the context of teaching about the coming of the Kingdom of God, Jesus performed many miracles. In the Gospel reading for the third Sunday of Luke, we see how a miracle performed by Our Lord Jesus Christ actually unfolded. During his ministry, Jesus travelled to towns and villages, where he taught and worked wonders. The Lord had no sooner approached the gates of the city of Nain, together with the crowd of people who accompanied Him, than He was met by a procession leaving the town, accompanying a dead young man. The small town was deeply sad. A stricken mother was walking behind her precious, only son towards his last resting-place. The Lord Jesus met His servant. The Giver of Life encountered death. The corpse was that of a young man, as we learn from the narrative, and the Lord restored him to his mother, having first revived him. The young man’s mother must have come from a relatively well-to do and prominent family, judging by the large crowd that attended the funeral. 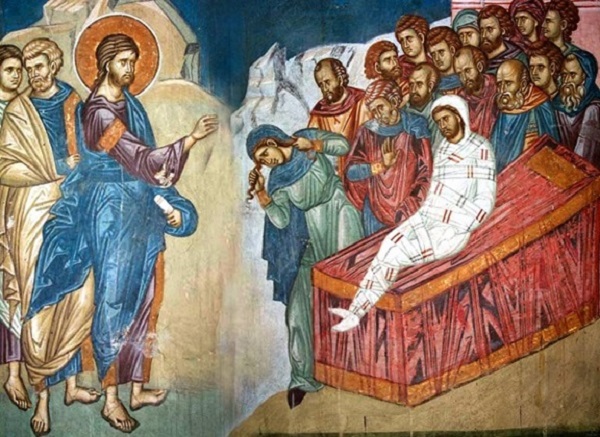 ‘And when the Lord saw her, He had pity upon her and told her not to cry’. It appears that the size of the crowd attending the funeral was an indicator of her social position but also of sympathy for the powerful blow she’d received at the death of her only son. The people around her must had been deeply saddened. This, in turn, would have made the mother’s sorrow even greater and increased the tears of despair and her sobbing. We may, indeed, seek to share our sorrow with others, but when death violently snatches one of our own, the contribution of others is too little to assuage our sorrow and pain. When weakness comforts weakness, it doesn’t amount to much consolation. Everybody standing next to a dead body is overcome with a strange feeling which it’s difficult to put into words. This feeling is shame. People don’t only fear death, they’re ashamed of it, as well. This shame is proof- much greater than fear- that death is a consequence of our sin, according to Saint Nikolaj Velimirović, Bishop of Ochrid.

But why does the Lord tell the widow not to cry? Would it be possible for her to have lost her son and not weep? Would it be possible for her not to despair? Would it be possible to lose someone close to you and not cry? In other words, is Christ condemning pain and tears? Certainly not. It’s natural for everyone to weep at the mystery of death. When Christ says ‘Don’t cry’, to the widow of Nain, His words have a different meaning. He calls upon her not to weep because He’s sure of the miracle of the resurrection that will follow. This reality is very different from the one which the widowed mother saw. Christ Himself wept over His four-day dead friend, Lazarus, when He saw Mary and the other relatives mourning him. The reason why Jesus wept at this sight is explained by Basil the Great. He notes that Jesus wept, just as He drank, ate, and became tired. He experienced what we call these natural passions, even though He didn’t need to. He did so out of condescension, to make sure that no-one could say that He wasn’t a real person.

Apart from that, there was another occasion when Christ wept freely. When He was entering Jerusalem, ‘he saw the city and wept over it’. Why did He weep in this instance? Because, as someone who could read hearts and minds, He realized that the people wanted Him as a secular ruler. A few days later, when they realized that His purpose was to bring them to submission to God’s will- and therefore to be truly saved- they cried ‘Crucify him’.
Death, pain and sorrow entered our lives through sin, through our disobedience. God made us for life, He planted within us the desire for immortality. God permitted death for one reason, according to the Fathers of the Church. Death, as the price of sin, is also an indication of divine mercy. According to Methodios of Olympus, God allowed death so that evil wouldn’t be immortal. Saint Gregory the Theologian says: ‘and mercy becomes punishment…’. Saint John Chrysostom says: ‘for death is such that it doesn’t annihilate the body, but does away with decay. Because the essence remains and will be resurrected in greater glory, though not for all’. Our first-born ancestors, Adam and Eve, ignoring and dismissing the divine command, tasted of the tree of the knowledge of good and evil and thus tasted death.

God had warned them that death would result if they disobeyed: ‘but of the tree of the knowledge of good and evil, you shall not eat, for on the day you do eat of it, you will surely die’, ‘for God created people for incorruption… but, through the devil’s envy, death entered the world’ (Wis. 2, 23-4). Through our fall, in other words that of Adam and Eve, we condemned ourselves to death. Through the way they behaved, they showed that they didn’t need God in their lives. They misused the power they had over their freedom. The world isn’t self-supporting, nor self-explanatory, nor, by its nature, eternal, as the ancient Greeks believed. It came into being as the result of God’s love, says Saint Maximos the Confessor

The scene is exceptionally poignant and affecting. An encounter between two groups of people. The group accompanying Life and that attending death. At the centre of the first group is Our Lord, Jesus Christ, our Life and Resurrection. At the centre of the second is a mass of people in pain. Death is overcome when the Lord says: ‘Young man, I tell you, rise’, because Life flashed like lightning and destroyed it. 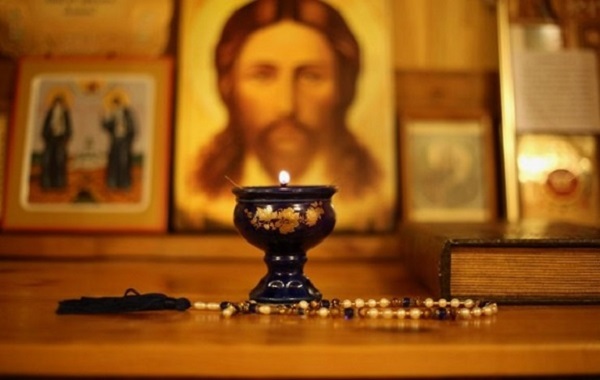 With this Gospel reading, the Church wishes to teach us that Jesus is the true Messiah, the saviour and redeemer of us people. The other lesson is that He defeated death and opened up the way to eternal life. That is what we sing on Easter night: ‘Christ has risen from the dead, trampling down death by death and to those in the tombs giving life’. We may be sure that Christ will raise all the dead. Death isn’t the end, but a bridge, a crossing-point into eternity, into a life without end, a life with no room for pain or sorrow. ‘With the saints, give rest Christ to the soul of your servant, in a place where there is no pain, nor sorrow, nor sighing, but life everlasting’.

Sorrow should never paralyze us or distress us. We should have faith and understand that the death of a friend or relation means we’re being called upon to submit to God’s will and to show confidence in His design. Christians who strive and who hope in God’s providence don’t fear death, but, on the contrary, defeat it by putting to death their own passions and the sinful desires of this life, which are what cause our spiritual death. That is, they alienate us from God. Let us conduct our own struggle against our sinful and impassioned self, setting out on a new path towards glorification, towards our union with God. Amen.