Ver. 15, 16. Neither circumcision nor uncircumcision means anything; what counts is the new creation. Peace and mercy to all who follow this rule, to the Israel of God

Do you see the power of the Cross, to what a height it’s raised him? Not only has it put to death all mundane affairs as far as he’s concerned, but has set him far above the old dispensation. What is equal to this power? The Cross has persuaded him [Paul], who was prepared to slay and be slain over the issue of circumcision, to simply equate it with uncircumcision, and to seek things strange and marvellous and above the heavens. He calls this way of life a new creation, both on account of what’s past, and of what’s to come. Of what’s past, because our soul, which had grown old with the hoariness of sin, has all at once been renewed by baptism, as if it had been created anew. This is why we require a new and heavenly way of life. And of things to come, because heaven, earth and the whole of creation, will be transformed into incorruption, as will our own body. ‘Don’t talk to me’, he says, ‘about circumcision, which now serves no purpose- how can it when everything’s undergone such a change- but seek the new things of grace’. Those who pursue these things will enjoy peace and goodwill, and may properly be called by the name of Israel. Those who hold contrary sentiments, though they be descended from him [Israel] and bear his title, have, however, fallen away from both the relationship and the name itself. But it’s still in their power to be true Israelites, provided they keep this [new] rule, desist from the old ways, and pursue grace. 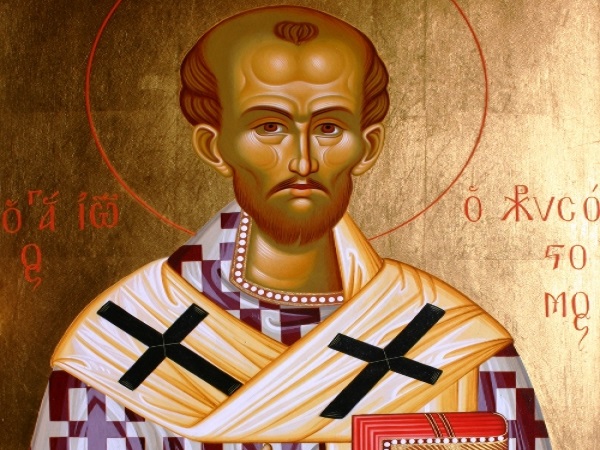 He says this not because he’s weary or overwhelmed. How could he relax and recline when he chose to do and suffer everything for his disciples’ sake? It was he who said, ‘Be prepared at all times (2 Timothy 4:2); and, ‘… in case God grants them repentance, brings them to a knowledge of the truth, and frees them from the trap of the devil’ (2 Timothy 2:25-26) Then why does he say this? It’s to sharpen their slothful mind, and to impress upon them a deeper fear, and to bolster the laws he himself had put in place, and to stabilize their constant vacillation.

He doesn’t say, ‘I have’, but, ‘I bear’, like someone taking pride in trophies and royal insignia. He still thinks his wounds are actually shameful*, yet boasts of and rejoices in them as if they were military standards**. And why does he say this? Because they speak louder than any words or any voice. ‘They make a noise louder than any trumpet against my opponents, and against those who say that I’m a hypocrite in my teaching and that I speak to please others. Nobody who sees a soldier retiring from the battle soaked in blood and sorely wounded, would dare to accuse him of cowardice and treachery, given that he bears on his body the evidence of his bravery. So ought you to judge me. And if you want to hear my defence, and to learn what I think, consider my wounds, which offer a stronger proof than these words and letters’. At the outset of his Epistle he indicated his sincerity by the suddenness of his conversion; at its close [he proves it] by the perils which attended it [his conversion]. In case anyone says that he might have converted with the best of intentions, but that he hadn’t persisted, he produces his trials, his dangers and his wounds as evidence of his tenacity.

Then having defended himself clearly in every particular, and proved that he hadn’t spoken from anger or malice and that his affection towards them was unimpaired, he expresses it in a prayer with a thousand blessings, in these words:

Ver. 18. The grace of our Lord Jesus Christ be with your spirit, brethren. Amen

In these last words he confirms everything that preceded them. Elsewhere he says ‘with you’ but here he says ‘with your spirit’, drawing them away from carnal things, demonstrating God’s beneficence, and reminding them of the grace which they enjoyed, whereby he was able to recall them from all their Judaizing errors. That they received the Spirit was not the result of the poverty of the Law, but of the righteousness which is by Faith. And the fact that they preserved it, once obtained, wasn’t due to circumcision but to Grace. This is why he concluded his exhortation with a prayer, reminding them of Grace and the Spirit. At the same time he addressed them as ‘brethren’, and prayed to God that they might continue to enjoy these blessings, thus providing them with a twofold protection. Both prayer and teaching, were working to the same end and together became a double wall. Teaching, reminded them of what benefits they enjoyed and kept them within the doctrine of the Church; while prayer, invoking grace and convincing them to remain constant, prevented the Spirit from leaving them. Because the Spirit dwelt in them, the deception of the [erroneous] doctrines was shaken off like dust, in Jesus Christ Our Lord, to Whom be the power and the glory, together with the Father and the Holy Spirit, now and for ever and unto the ages of ages. Amen

* The word stigmata meant ‘perforations’ or ‘piercings’ and refers to the holes caused by crucifixion, which was the most shameful form of the death penalty.
** Assuming that the scribe who wrote down Saint John’s homily didn’t simply mishear, there is a very nice distinction here. Saint John mentions ‘insignia’ (simeia) and then simeioforos which would mean ‘insignia-bearer’. The normal word would be simaioforos, a ‘standard-bearer’. The ‘standard’ would have borne the ‘insignia’ of the person concerned, so I feel that the slightly loose translation is permissible. WJL.