Through fasting we return to paradise
4. Because we didn’t fast, we left paradise. Let us fast, then, so that we can return to it. Look at Lazarus, who entered paradise through fasting (Luke 16, 20-31). Don’t imitate Eve’s disobedience, don’t accept the serpent again as a symbol, urging us to eat and take care of the body. 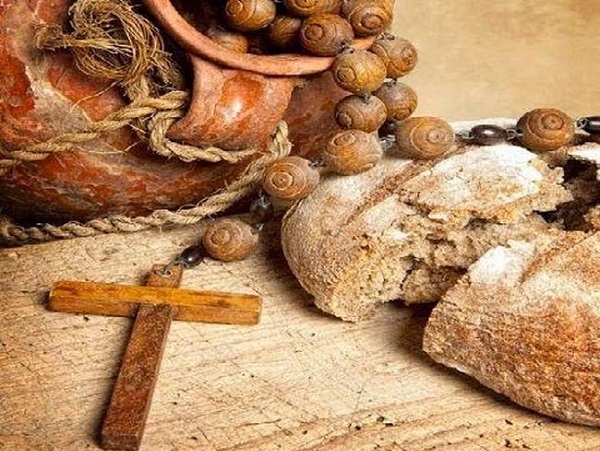 If people are ill, we don’t prescribe a variety of foods, but fasting and diet. And don’t make the excuse that you’re ill or weak. Because you aren’t telling me your justifications, but Him Who knows. Tell me, you can’t fast? You can, though, stuff yourself your whole life long and wear away your body with the weight of food. Yet I know that doctors tell patients not to eat and to go on a diet. So how do you, who can do one thing, pretend that you can’t do the other? What’s easier on the stomach, to get through the night on the frugality of a diet or to lie there, heavy with the weight of too much food. And it [the stomach] probably doesn’t just lie there, but makes you toss and turn because it’s stuffed so full and is worried that it may burst open. Unless you’re saying that helmsmen find it easier to save a ship that’s overladen than one that’s well-equipped and light. Because in the first instance, a ship founders in the slightest storm, because of the weight of its cargo, whereas one whose cargo is properly arranged easily ploughs through the storm, because there’s nothing to stop it riding the waves. So it is that the bodies of people who are always full because of over-eating are more susceptible to illnesses. But when you ingest plain, light food, the harm you’re expecting from the illness is avoided, just as a ship avoids a storm. And any irritation that’s already present is overcome as if it were a passing turbulence. And if you say that indulgence is more beneficial than diet for patients, it’s as if you’re saying that rest is more tiring than running or relaxation than struggling.

The richness and variety of foods is what caused various forms of illness. The strength that the body needs is easily provided and afforded by the self-sufficiency and frugality of those being nourished. But once you start adopting a variety of rich foods, then you can’t tolerate them in the end and this is what causes different illnesses.