Casting off our Sinful Nature and, by Grace, Clothing Ourselves in the Theanthropic Nature

‘Having cast off the old self with its practices, and clothed yourselves with the new self, which is being renewed in the awareness of Him Who created it’ (Epistle reading, Col. 3, 4-11).

We hear Saint Paul calling upon us to put aside our former self and to put on a new one. It may be that some people wonder what this might mean and what connection it has with the forthcoming great feast for which we’re preparing. 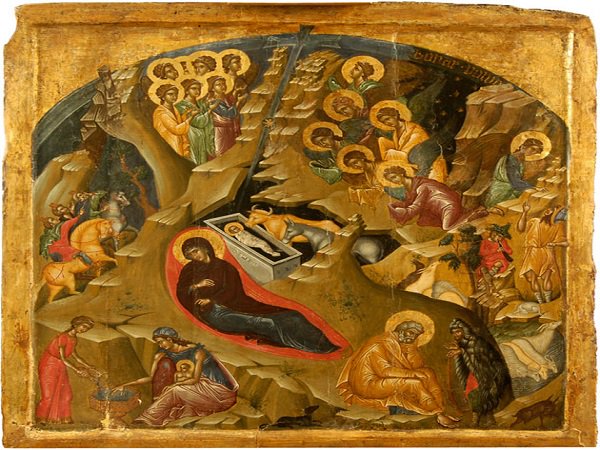 If we recollect, however, what Christmas means and what happened with the Lord’s nativity, then we’ll understand the meaning and the importance of Saint Paul’s exhortation.

So what did happen at Christ’s birth? Christ became a human person. He clothed Himself in human flesh. He clothed Himself in human nature, thereby covering the nature and splendour of the Godhead, in order to be able to approach people without frightening them, so that He could draw them close to Him and give them the salvation and adoption which they lost in the garden of Eden through the disobedience of their first ancestors.

But what actually happened in the garden of Eden? What happened when Adam and Eve received chastisement and punishment from God for their disobedience? According to Holy Scripture, they then realized that they were naked and took fig leaves to cover their nudity. With these leaves, they covered their sinfulness, but also, at the same time, covered the image of God, Who had formed this image when He created them. And this cover-up of sin became second nature for us, it became the ‘former self’ about which Saint Paul often speaks. This it is which hides the divine image each of has within us, while it also prevents us from becoming ‘in the likeness’ of God and experiencing our adoption by Him.

It is this sinful nature, the covering-up of the passions, that Saint Paul calls us to reject in order that we may approach Christ, Who, in a few days will be born as a human child on earth, for our sake.

Just as He will be clothed in human nature in order to approach us, so we should take care to put aside the clothing of our former self and allow Him to renew us and restore to us, through His grace, the first vesture in which He clothed us when He made us. Let us allow Him to restore the nature He formed, but which we’ve spoiled through sin, mistakes and our falls, and make it similar to His own, which is both human and divine.

At His nativity, Christ is clothed with human nature for our sake. Let us agree to cast off our former self, so that we may put on the grace of adoption which He offers us and may become true members of His Body. So that we may become God’s friends and enjoy the salvation granted to us by Christ through His incarnation. Amen.