Some monks from the skete set out to visit Abba Anthony. So they got on a boat and there found another Elder who also wanted to go the same place. The brothers didn’t know him, though. Sitting amidships, they talked about the sayings of the Fathers, phrases from Scripture or, in between, discussed their handicrafts. The Elder remained completely silent. When they got to the mooring-stage, they noticed that the Elder was also making his way to Abba Anthony. When they arrived the latter said to the monks: ‘You found good company in this Elder’. To the Elder he said: ‘You had good brethren with you, Abba’. ‘Good they are, certainly’, he replied, ‘but their yard doesn’t have a gate. Anybody who wants can get in and let the donkey loose’. He meant that whatever came into their mouth, they said.

Once he was walking along with his disciples and one of them found a little, freshly-sprouting pea plant. He said to the Elder, ‘Father, will you allow me to take that?’. The Elder looked at him blankly and said, ‘Did you put it there?’. ‘No’, came the reply. ‘So, if you didn’t, how come you want to take it?’.

They said about Abba Elladios that he lived at Kellia for twenty years without ever raising his eyes to see the roof of the church. 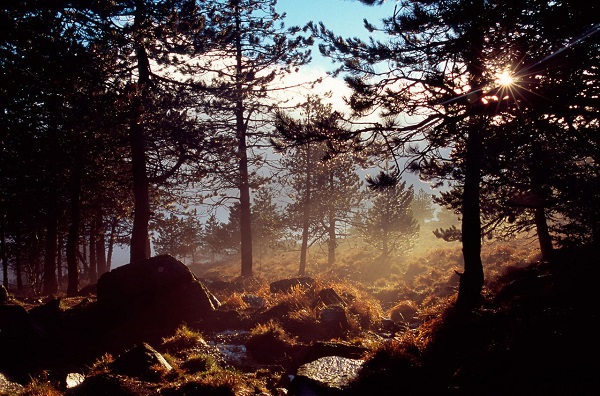 About Abba Zinon, they said that he was once walking in Palestine and became tired. He sat down to eat near a cucumber patch and thought to himself: ‘Take a cucumber and eat it. It’s nothing, that’. But a voice in his head said. ‘Thieves go to hell’. He got up and continued in the burning sun for the next five days. When he was done to a turn, he said to himself, ‘I can’t stand this hell’. And a voice in his head replied, ‘Then you’d better not steal in order to eat’.

Abba John the Short said: ‘If a king wants to capture an enemy town, he first cuts off the water and food supplies. Then the inhabitants are in danger of dying of starvation, so they surrender to him. The same is true of the passions of the flesh. If you live with fasting and hunger, the enemies in your soul will lose their strength’.

One of the brethren asked Abba Isidore, the oldest monk in Skete, why the demons were so afraid of him. The Elder replied: ‘From the time I became a monk, I’ve tried never to let anger rise to my mouth’.

One of the Elders went to a fellow ascetic so that they could go and visit Abba Iosif. He said to him: ‘Tell your disciple to load our things onto the donkey’. The reply came: ‘Call for him and he’ll do whatever you want’. ‘What’s his name?’ ‘I don’t know’. ‘How long has he been with you and you still don’t know his name?’ ‘Two years’. The visiting Elder replied, ‘If you haven’t learned the name of your disciple in two years, there’s no need for me learn it for one day’.

Abba Makarios said: ‘If you reproach someone and you feel active anger within you, you’re satisfying your own passion. In any case, nobody forces you to lose yourself in order to save other people’.

They once took Abba Makarios some grapes that he wanted to eat. From self-restraint, however, he sent them to another monk who was sick and who also wanted to eat them. He took them and made a show of being happy, because he wanted to conceal his self-denial, but sent them on to another monk, on the pretext of not being able to face food. This monk received them, and did the same thing, even though he really did want to taste them. The grapes did the rounds of all the brethren and the last one gave them to Abba Makarios, thinking he was doing him a great favour. Makarios recognized them, however, and, once he’d discovered what had happened, he was astonished, and thanked God for the great self-control of the monks.

The Elder also said that one monk asked Abba Pambo whether it was good to praise one’s neighbour. He answered: ‘Better to keep quiet’.

A monk asked Abba Tithoi, ‘How can I guard my heart?’. The Elder told him, ‘How can we guard our heart, when our tongue and stomach are open?’.

He also said, ‘If you can’t control your tongue when you’re angry, you’ll never be able to control your passions’.

And it was he who said: ‘Better eat meat and drink wine than consume the flesh of your brothers with fault-finding’.

The Elder once went out at night and found me sleeping in the yard outside my cell. He began to lament over me and weep, saying: ‘What’s he thinking, to sleep so heedlessly?’.

One of the Elders visited another one, who told his disciple: ‘Make us some lentils’, which he did. ‘And soak some bread’, which he did. They sat and talked about spiritual matters until the sixth hour of the next day, when the Elder said to his disciple again: ‘Make us some lentils, son’. The disciple replied: ‘I’ve had them ready since yesterday’. So they got up and ate.

One of the Elders fell ill and, because he couldn’t take food, his disciple kept asking him if he could make him a little batter from semolina. He went and did so and brought it to him. But there was a vessel hanging up with a little honey in and another with linseed oil. This smelt off, because it was very old and was going to be used for the oil-lamp. By mistake, the monk put that in the food instead of honey. When the Elder tasted it, he said nothing, but ate in silence. The monk insisted that he have a second helping. The Elder forced himself to eat it. He gave him a third helping, but the Elder said: ‘Really, son, I can’t’. In order to encourage him, the disciple said: ‘It’s very good, Abba. I’ll eat some with you’. No sooner had it touched his tongue than he realized what he’d done and fell face-down onto the ground. ‘That’s terrible, Abba. I’ve killed you, and you’ve loaded the sin onto me by not speaking’. The Elder said to him: ‘Don’t be upset, son. If God had wanted me to eat honey, you’d have put honey in’.