The Triune God is our Saviour

Jesus taught in the synagogues on Saturdays. The reason behind His choice of day was that, for the Jews, Saturday was a day of rest and worship of God. Any work was completely forbidden. Even the distance one could walk was strictly defined. So on this day, everyone gathered in the synagogues to hear the word of God. One Saturday, in one of the synagogues, there was among the congregation a woman whose body was so bent that she couldn’t fully straighten herself up. Because of her infirmity, it had been eighteen years since she been able to look at other people from a natural position. A pitiable condition. Her life was one of continuous suffering. She had, however, hope in God. For Christians, hope is a gift from God and is sure and incontrovertible. Let us recall Saint Paul, who separates people into those who have hope and those who don’t.

Human knowledge and the resources of human wisdom, were unable to cure her. Her illness was caused by an evil spirit which had entered her body. The woman was devout, however, had inner joy and also had confidence in God’s will. This is why the Lord called her to come to Him, though she herself hadn’t asked anything of Him. The Lord was sorry for her. His heart melted and He decided to put an end to her suffering. ‘Woman’, He said, ‘you’re freed from your infirmity’. The Lord healed her by placing His hands on her head and she felt a foreign force enter her body. 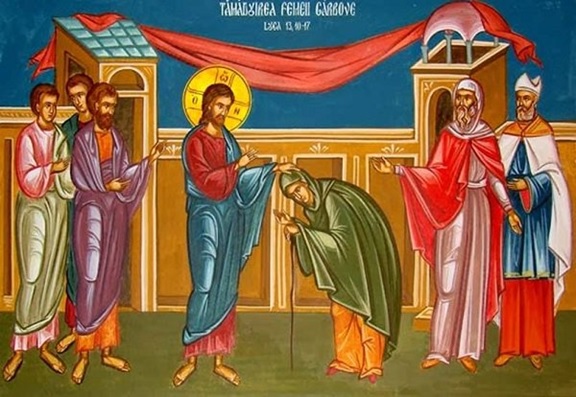 When the woman had been healed, everyone present praised God for His wondrous works. Unfortunately, however, there was one person who was unable to tolerate this situation. That was the leader of the synagogue, the chief among those who appeared to be and were considered to be the most God-fearing of people. Unable to hide his envy, he began to protest: ‘But the leader of the synagogue, indignant because Jesus had healed on the sabbath, said to the people, “There are six days on which work ought to be done; come on those days and be healed, and not on the sabbath day”’. He was so blinded by the passion of envy that he made out that Jesus had preformed a professional job.

The Fathers refer to and comment on the passion of envy at great length. Those who are envious can’t recognize any value at all in other people. They overlook any and every good quality and try to find some fault, which they then magnify in other people’s eyes.

The Lord was faced with the hypocrisy and wickedness of those fanatical supporters of Jewish traditions who imposed complete abstention from work on the day of the Sabbath. The leader of the synagogue didn’t dare reproach Christ directly for what He’d done in the synagogue, but he did rebuke those who, in his view, weren’t observing the Sabbath as a day of rest. Inside himself he was burning with the passion of envy against Christ and, although he pretended to be pious, he was actually looking for some reason to attack the Lord. The Lord answered: ‘You hypocrites! Does not each of you on the sabbath untie his ox or his donkey from the manger, and lead it away to water it?’. Then He went on to say: ‘And ought not this woman, a daughter of Abraham whom Satan bound for eighteen years, be loosed from this bond on the sabbath day?’.

The leader of the synagogue wasn’t able to understand because he was overwhelmed by the passions of hypocrisy and envy. These are terrible passions. Hypocrisy is a condition that makes people two-faced. Envy is our sorrow over other people’s happiness, or our joy over their unhappiness. Strange though it may seem, envious people are annoyed when others are doing well and rejoice if they’re unhappy. Envy is a perversion of love. If you envy people, you can’t love them. You live in hell, the hell of wanting what’s bad for other people. Saint Isaac the Syrian says that if you have envy in your heart, you also have the devil there.

Unfortunately, both these passions [hypocrisy and envy] are flourishing these days. There are people who are struggling for piety, righteousness and sanctity, but who, in their private lives, are impious, unjust and harsh. Hypocrites, however persuasive they are as regards outward show, repel us. The envious turn other people away all on their own. These days there are a lot of people who resemble the leader of the synagogue. They doubt the miracles performed by the saints of the Church, they mock the divine and sacred things in our faith, they question the role of the Church, with the result that demagoguery prevails. But just as the leader of the synagogue didn’t dare to state his problem with the miracle directly to Christ, so all those who think they’re monitoring and correcting the work of the Church are labouring in vain. Saint Isaac the Syrian says that, if you want to correct the work of the Church, first correct yourself.

My friends, the example of the woman who was bent over should be an example for us. If a woman in her condition didn’t neglect her duty to God, in an ordinary synagogue, how can we who are healthy justify our absence from the Temple of God, from the truth, from reality. We find a variety of excuses to justify our absence. Supposedly we need to rest on the day we aren’t working, we’re going off on a trip, the kids have homework. Saint Gregory Palamas has an answer for this: ‘Let no-one absent themselves from the holy assemblies on Sunday, either from idleness or from being bound up with earthly things, lest they be abandoned by God and suffer the same fate as Saint Thomas, who didn’t arrive in time’.

So let us abandon our daily cares and take part every Sunday in the sacrament of the Divine Eucharist where we breathe in the grace of the Triune God. At the Divine Eucharist we experience the presence of God. Our soul finds respite from our everyday problems and takes strength from the Lord in order to continue the struggle of life. God’s worship is of great value. Through it we demonstrate our faith in and our recourse to God.