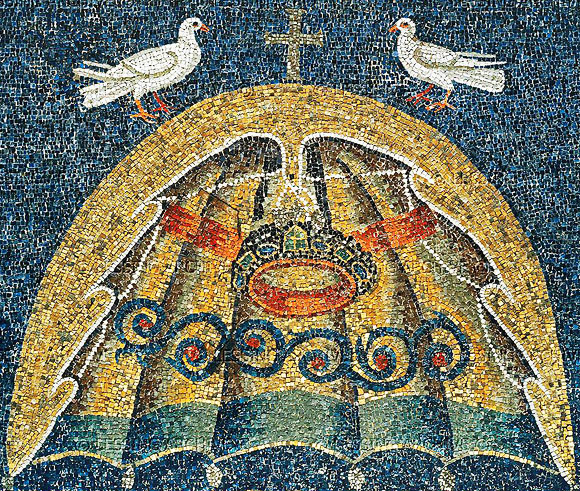 Christ’s advent brought the kingdom of God into the world. And the realm where the kingdom of God is made manifest is the Church. This retains eternity within history and provides history with the perspective of eternity. The Church is the body of Christ, which transcends time and space, joining people together in a transcendent community outside time, where everything is present in the Holy Spirit. In the Church, time and the whole world are saved. Whatever God provides for the world is in the Church and is then given to people for their salvation and renewal.

The kingdom is God is not merely awaited in the future, but is perceptible also in the present. And Christ’s resurrection and people’s renewal is not awaited merely in the future, but is also available in the present: ‘The time is coming, and now is, when the dead will hear the voice of the Son of God and those who hear it will live’ (Jn. 5, 25). The voice of Christ, which has already been heard and has called people from death to life, will also call those in the tombs and will revitalize them. The time that is coming, but which is already present, is the time of the presence of Christ. It is Christ Himself. The last things exist in the last Adam, Christ. What is expected is already provided in His person. The period of His presence and His Church is the period of the ‘last days’ (Cf. Acts, 2,17; II Tim. 3,1; Heb. 1, 2; James 5, 3; I Jn. 2, 18; Athanasios the Great,  Against the Arians 1,55, ΡG 26, 125 C). It is the period in which God and His kingdom are made manifest in history (Cf. Matth. 16, 28; Mk. 9,1; Luke, 9, 27). It is the beginning of eternal life, which is not terminated by death.

Christ’s Transfiguration and Resurrection are already manifestations of the kingdom of God in the world. And the times after the Lord’s advent are the last times. The manifestation of the glory of God in the Church, with the descent of the Holy Spirit on the day of Pentecost, as well as the personal manifestations in the saints of the Church, are eschatological events. And the experiences of these events are experiences of the final manifestation of God, which, because they take place in time and space, where there is still death and corruption, are necessarily ‘partial’ (1 Cor. 13, 9). In this way, the last times are both present and awaited, experienced and expected.

When the Church was constituted, communion between God and people was realized. The uncreated and eternal God was united ontologically with created and mortal humanity. Eternal life made its appearance in that which is fleeting. So, created and mortal humanity became, by grace, eternal and everlasting, that is without beginning, because the grace which renews our existence is also uncreated, eternal and without beginning. Nothing remains now to hinder the conjunction of created and uncreated, temporal and eternal, of the present and life. The times when these events take place are the last times. The date and the hour is the last hour. Nothing is awaited now. Not the Messiah, not the Comforter, not the Antichrist. They are all present: Christ, the Comforter and the Antichrist. Christ is present with the Holy Spirit in the Church. And the Antichrist is present as the evil spirit who fights against the Church: ‘Children, it is the last hour, and as you have heard that the Antichrist is coming, so now many Antichrists have come. Therefore we know that it is the last hour’ (1 Jn. 2, 18. Cf. also 4, 3). The presence of the Antichrist is an eschatological phenomenon, not so much in itself as in the relationship- or, to be more precise- the juxtaposition with the eschatological presence of Christ. Everything that has contributed to the incarnate manifestation of God in history, with His Crucifixion and Resurrection, have created the last times, the last day, the last hour, which is here and now.

So the last times are not restricted to the end of history, but are already here. The whole period after Christ’s advent is the last times. And Christ, Who is ‘the Alpha and Omega… he who is and he who is coming’, (Rev. 1,8) is the Lord, the beginning and the end of history. Whoever has Christ, has life (I Jn. 5, 11). The experience of this life already exists in the Church. Our renewal and glorification in Christ, which we await in the age to come, is also experienced in this life: ‘Now we are God’s children, and what we will be has not yet been manifested; but we do know that when he appears we shall be like him, because we shall see him as he is’ (1 Jn. 3, 2).

Although the kingdom of God appears in the world ‘through a glass, darkly’ (1 Cor. 13, 12) it is still truly present. The symbols by which it is known are not metaphorical or relative, but genuine. The uncreated light of the Transfiguration, of the Resurrection and of Pentecost, as seen by the saints of the Church, is the light of the kingdom of God. It is the real symbol of His presence.