Today, my Christian brothers and sisters is the third feast of the Lord. The first is the Nativity, the second the Circumcision and the third is His Baptism. Since we’re already tired by the liturgy of Saint Basil the Great, which is longer than that of Saint John Chrysostom which we hear every Sunday, I’ll just say a few words and finish my humble sermon quickly. 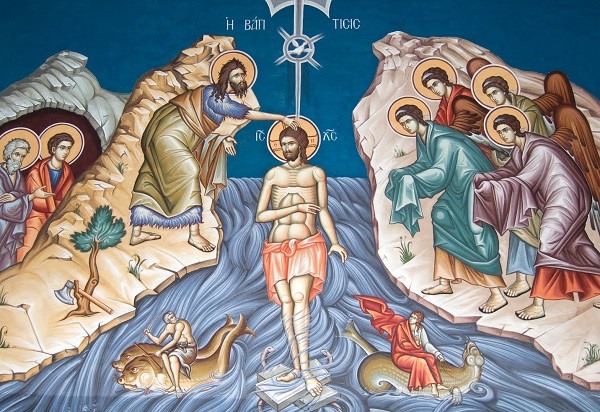 My beloved friends, Jesus Christ is sinless, and so has no need of baptism. But He comes to John’s baptism because that was God’s will. Through this action, Christ validated the work of John. At Christ’s baptism we hear the voice of the heavenly Father: ‘This is my beloved son, in whom I am well pleased’. This voice is from the Old Testament which had declared the Messiah as the beloved Son of God (see Ps. 2, 7; Is. 42, 1). At Christ’s baptism, He ‘arose at once from the water’. This clearly demonstrates His sinlessness, because in those days the people who were being baptized stayed in the water for as long as it took them to confess their sins. Since Christ was sinless, He ‘arose at once from the water’.

And apart from this, at Christ’s baptism the heavens opened, even though Adam had closed them with his sin. This means that, when Christians are baptized, the heavens are opened for them, too. The most wonderful thing is that, at Christ’s baptism, the Holy Spirit also descended. Why? He came to show that the One Who’s being baptized, that is Christ, is greater than the one who’s baptizing, that is the Forerunner. This is the opposite to what the Jews thought who felt that John must be superior to Christ, so the Holy Spirit came precisely in order that they wouldn’t think that the voice of the Father, saying ‘This is my beloved son’, was speaking of John. This is also why the Holy Spirit, in the form of a dove, descended on Christ. The Holy Spirit took the form of a dove in order to declare that, to receive the grace of the Holy Spirit, we have to be pure, as doves love cleanliness. And just as a dove with an olive branch announced the end of the flood to Noah, so here the dove announces the remission of our sins through baptism. Zigavinos, a fine interpreter of the Holy Scriptures, says that the opening of the heavens and the descent of the Holy Spirit at Christ’s baptism are both precursors of Christian baptism.

My Christian friends, let’s not forget our baptism and the fact that through it we became God’s own adopted children. Let us, then, honour our worth as such, our divine adoption, and let us keep our baptismal robe free of the stains of sin.