Let’s not be overwhelmed, then, by that fear which has to do with the things and conditions of this vain world. In other words, let’s not fear where there’s nothing to fear (I Jn. 4, 18). What human fear can compare with the fear of God? And what passing human glory can be compared to the majesty, the inexpressible power and the imperishable glory of God?

But since earthly matters distract us, we can’t- even with the power of faith and the enlightenment of knowledge- focus our mind on the things invisible. If, merely through the sight of visible things, we’re brought to an understanding of the inexpressible power of immortal God, let’s stand before Him in awe and infinite respect. 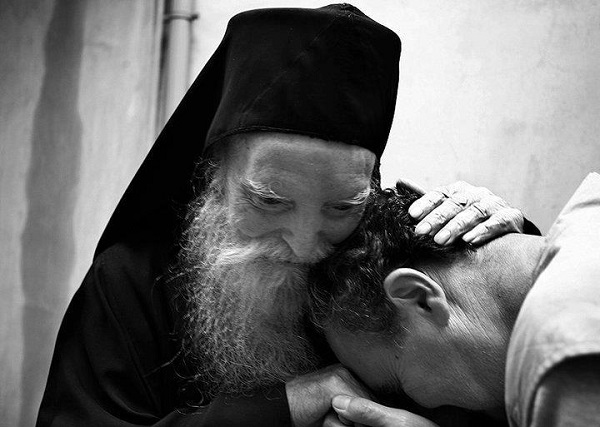 If you want to move a rock, no matter what your position in life is, you still won’t be able to do so in any way other than with levers and ropes. God, however, can make the earth tremble just with His glance (Ps. 103, 32). Doesn’t that astound you? The mere glance of God is enough to make mountains tremble and other massive objects shake. By His good will, He supports the universe with His word. More than anything else, aren’t you impressed by the brightness of lightning and the clash of thunder? These are so astonishing that not only do people shrink in terror, but so, too, do the wild animals and the birds, the beasts and the water-fowl. Whatever we say, we can’t do justice to the majesty of these phenomena.

Let us, then, kneel before Him and weep (cf. Ps. 94, 6) before His goodness, speaking from our heart and saying: ‘You, Lord, are our God and we have no other. We’ve sinned before You and now we fall before You. If You so wish, Lord, You’ll save us. No-one can divine this decision of Yours, Lord, and challenge You over it’.

The Lord is merciful and good. Even if we’ve been led astray and have sinned through carelessness, let’s make sure we’re healed through repentance. Or again, if, as human beings, we’ve been led astray by some passion, let’s not despair completely, but, in the knowledge of the God Who has called us and in the awareness of His command, let’s listen to Him Who says: ‘Repent, for the Kingdom of God is at hand’ (Matth. 4, 17).

He didn’t ordain repentance as the medicine for only a few sins, excluding various others. For every wound of sin, for every spiritual transgression, the Great Doctor of our soul has prescribed repentance as the cure.

So let’s root out the bad habits of our soul. Instead of cauterizing instruments, let’s use the fear of God, with which we’ll be able to repel all the pointless desires which the thorns of sin have brought with them. With sound reasoning, let’s oppose that which our pleasure-seeking thoughts direct us towards, because it’s written: ‘Be holy, for I am holy’ (1 Peter, 1, 16).

Then, by the Grace of God our Saviour, we’ll achieve immortal life.

If we return to Him in genuine repentance, the Lord will forgive and erase our sins, since He’s merciful and kind.

And if any of those who’ve laboured harder in asceticism and virtue should complain about the Lord Christ’s leniency- since we’ve arrived late on the job and yet receive the same reward as those who’ve worked the longest- Christ our Creator will answer them: ‘Friend, I’m not doing you out of anything. Didn’t you agree to work for a particular sum? Take what we agreed and fare you well. I choose to give to those who arrived last to work the same as I gave you who arrived first’ (Matth. 20, 13-14).

God is He Who judges and justifies. Who can stand before Him and condemn us? (Rom. 8, 34).

To Him be glory unto the ages. Amen.