The Case of ‘Fools for Christ’

Among the many saints- that is, the people who loved Christ, ‘with all their heart’ and expressed their love through self-denial and shouldering their cross- there are those we know as ‘fools for Christ’. Usually monastics, they present themselves to the world as mad, opposed to common sense, saying and doing things that make them look senseless and immoral. But this behaviour concealed their faith, gifts, sanctity and freedom from the passions.

This type of asceticism was a call from God, not a personal choice. It was a special gift given to certain people for a particular reason in a particular society. In most cases this was a society which, in Christian terms, had become secular, had lost the true meaning of Church life and was living according to formalities, surface norms, and false appearances.

Since ‘foolishness for Christ’ is a gift of the Holy Spirit, it can be understood only through His enlightenment. ‘Foolishness for Christ’ and external foolishness are very similar, which is why the distinction between them can be seen only by those who are able to discern the presence of the Grace of God in these people’s words and actions. 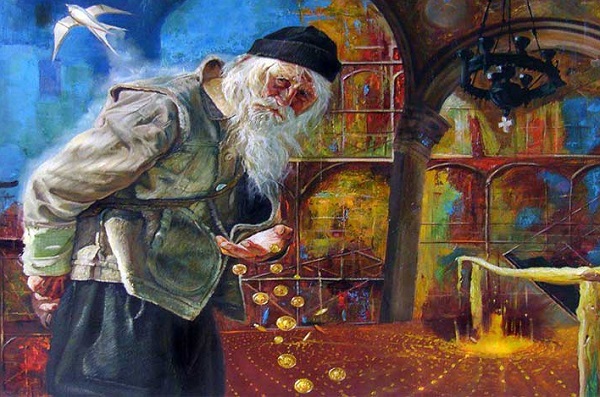 Even though ‘the whole world is under the control of the evil one’ and is governed by the ‘ruler of the darkness of this age’, God, as Love and as Father, hasn’t left His children without succor and protection. The presence of the saints is the presence of God among us.
In reality, the ‘fools for Christ’ mock both the devil and the secular outlook. By entering into the absurdity of the devil and the secular world, by living as irrational fools, it’s as if they’ve gone into his own realm. This is how, by God’s grace- which, as saints, they have- they flout the devil and destroy him ‘in his own house’.

In a secularized Christian world which has lost its identity, which has denied its roots, which encourages formalism and superficiality, the case of the ‘fools for Christ’ reminds us of another kind of logic, that of God. It emphatically shows that sanctity is a sacrifice for Christ and His brothers and sisters who are going astray in confusion and selfishness. It demonstrates the power people have to reject and to disdain, to refuse comforts, a good name and false, superficial morality.

Clearly this way of life isn’t for everyone, nor does God require it of everyone. But if we bear in mind this difficult path to sanctity, we may be able to transcend to some small degree our formal ‘religious duties’. We may be able to experience the true essence of the Christian life, which consists of the humility which isn’t dependent on other people’s opinion, on the love which isn’t ‘good actions’. Instead it’s founded on the giving of the heart and the sacrifice of our self, as an expression of love in Christ.

In this way we may acquire the logic of God, the mind of Christ and, therefore, His peace and joy.

The Greek root sal- gives a number of words. One is a verb, used by Saint Paul in 2 Thess. 2, 2, meaning ‘shaken in mind’. Another is SAL-os, meaning turmoil. And a third is sal-OS, meaning someone whose mind has been shaken. So a ‘salos’ isn’t a simpleton, someone born without the faculty of understanding; they’re people who have had their mind disturbed. The word we translate as ‘for’, dia, does, indeed, mean this, but not only this. As long ago as the Odyssey, it was used (with the accusative case, as in ‘for Christ’), to mean, ‘by’ or ‘through’ (Od. 8, 520). In other words, they’re fools not ‘for the sake of Christ’ but ‘because of Christ’. So, to continue the explanation of Fr. Andreas, what we translate as ‘foolishness for Christ’ is indeed a gift of the Holy Spirit. Christ has ‘shaken the minds’ of certain people and has enabled them to see through the superficial reality of the secular world. As a result, they act in a manner which is in accordance with the logic of God and this makes them appear ‘fools’. In Slavonic the root is div-, meaning ‘uncultivated’ or ‘wild’. Again, the implication is not that such people are lacking the mental ability to process information and stimuli, but rather that they refuse to conform to superficial norms. [WJL].