When his enemies became aware of his presence, they followed him, because they wanted to find out who it was who’d come to Trifyllios, where he’d come from and where he was staying. Five hundred Hagarenes [Arabs] were on his heels.

The young child ran to escape. They pursued him, like rabid dogs closing in on their prey. But the Lord knows how to deliver people from a tight spot. A voice from heaven was heard, saying: ‘Diomidis, turn round and make the sign of the cross over your pursuers’. No sooner had he quickly done so than they were inundated with divine wrath. Their bellies and hidden members swelled with fluid to such an extent that they were in danger of exploding. They couldn’t move forwards or backwards and were in great pain and confusion. Then those rabid dogs who had been pursuers just moments before were transformed into abject suppliants. Because the saints have great compassion, given that they’re imitators of God, Diomidis also had this quality, so he took one of the men to his cave and told him: ‘If you abandon the impiety of your fathers and believe in the Lord Christ crucified, you’ll immediately find an easy cure’. He answered: ‘I believe, sir, in Christ the Lord. I just want to find a cure for this painful affliction’. The saint knelt and prayed quite a long time. Once he’d made the sign of the cross over the man, he baptized him ‘in the name of the Father and of the Son and of the Holy Spirit’, making him well in the body at the same time. 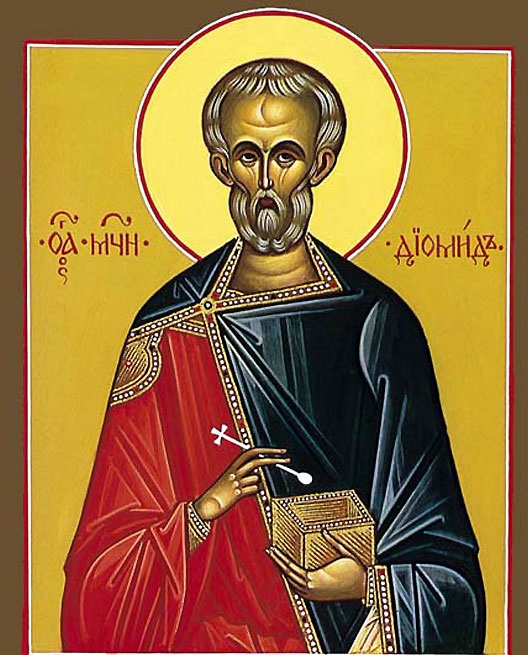 When his companions saw his swift and complete cure and heard how it had been effected, they all knelt before the saint and asked him to free them of the illness. He replied: ‘If you abandon the impiety of your fathers and believe and are baptized in the name of Father, Son and Holy Spirit you’ll be cured at once’. With one voice they all immediately confessed their faith. The saint then said to them: ‘Because of this faith and good confession, may the illness depart and the cure come’. Marvel at the boldness of the saint before God and also his admirable and speedy assistance. Those who were suffering from a double illness, sent by God, became sound and whole in body. They praised the Lord Christ and His servant, Diomidis, and gladly sought the grace of divine baptism. Thereafter, they didn’t return to their homeland. They took a decision: ‘We must stay to the end in the land where we were enlightened and acquired adoption and this is where we shall leave our bones’.

A glass of wine tells you about the quality of the whole amount and a few arrows reveal the skill of the archer. In the same way, though there were many others, this miracle suffices to teach us how bold the saint was in the sight of God. Since, according to the book of Solomon the Wise, his soul ‘became pleasing to God’ and ‘since he was made perfect in a short space of time, it was as though he had completed many years of virtuous life. Even though he was still young, he came to the twilight of his life. ‘Having trodden the path to the end and kept the faith, he became worthy to receive the crown of righteousness’. He ended his life on 28 October, and was found worthy, as an honourable man, of an honourable end and was numbered among the saints. His holy and pure soul was borne to God with honour by the holy angels, in the eternal tabernacles in the light of the day without end, in the realm of the just, while his irreproachable and spotless body was buried with honours by devout men in the cave of his ascetic labours, near Lefkomiada. By God’s grace, this became a source of miracles and a healing remedy ‘for every illness and weakness’ for those who prayed with faith.

When a church had been built to the Saint and a monastery of honourable monks had been founded, one of them went to Constantinople, where he came across one of the best icon-painters. The monk was much taken with the man’s beautiful icons and asked him to paint the icon of Saint Diomidis. The iconographer replied: ‘I know of the martyr Diomidis, in whose name there’s a monastery, but I don’t know about Saint Diomidis, so I can’t paint his icon’. The monk was deeply disappointed and begged the iconographer to reconsider, but to no avail, since he didn’t know Saint Diomidis at all.